The pictures from the family's visit in April to Jerusalem were posted in honor of North West's birthday. 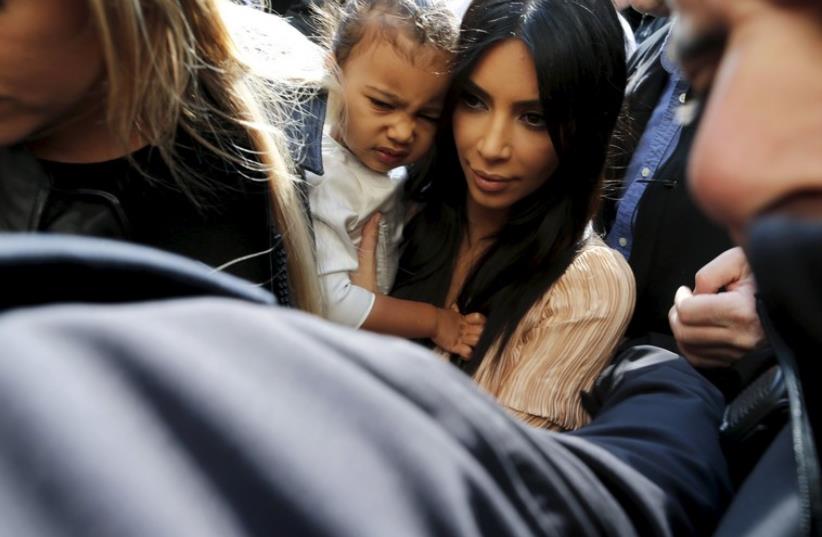 Kim Kardashian and daughter North West arrive for a baptism ceremony at the Cathedral of Saint James in Jerusalem's Old City
(photo credit: REUTERS)
Advertisement
One proud mama! American reality princess North West turned two on Monday, prompting her famous mom Kim Kardashian to share some never-before-seen snaps from the tot’s recent baptism in Jerusalem. Kardashian’s daughter was baptized in April at the Saint James Cathedral in the Armenian Quarter of the capital’s Old City. Some of the newly-released photos show the 34-year-old TV personality clad in a white-laced head scarf, her then 22-month-old baby leaning languidly against her; as the private 30-minute ceremony is underway.


One snap of the adorable baby girl nestled comfortably in her mom’s arms was captioned, “Sleeping Beauty.”

In another, the two-year-old's proud parents stand in front of clergymen at the centuries-old Armenian church, Kanye West gazing downward at the cobblestone floor; his wife of more than a year looking straight ahead, as their sleeping daughter is clutched tightly in her arms.“This was where Mary took Jesus to wash him off after he died on the cross,” the reality starlet wrote alongside a picture of her family gathering in the orange-lit Church of the Holy Sepulchre, beside a slab of pink marble.

I don't remember posting these pics of us in Jerusalem. This was where Mary took Jesus to wash him off after he died on the cross
A photo posted by Kim Kardashian West (@kimkardashian) on Jun 14, 2015 at 10:50pm PDT