The Scots Hotel’s weekend brunch is a Tiberias attraction. 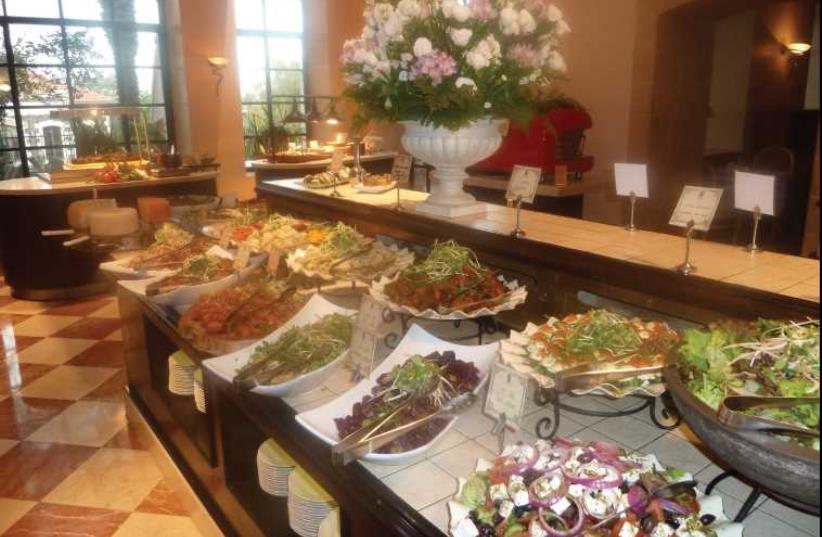 The Scots Hotel’s restaurant
(photo credit: PR)
Advertisement
The Scots Hotel in Tiberias was established by the Church of Scotland on the site of the historic Scottish Hospital. Today, there is a glittery, delicious culinary world within, ensconced in a tranquil garden with limestone walls and a lovely sea view.The weekend brunch at the Scots Hotel proves that Scottish breakfasts (or at least the blend of the Scottish and Israeli) can challenge Israeli-owned luxury hotels for their hegemony over extravagant, mouth-watering breakfasts.Not that the Scots buffet is that extravagant. It serves just the right amount and just the right variety of salads, hot dishes and desserts so that you don’t overly stuff your face but do not feel deprived, either.From what I’ve tasted around Israel, the salads there are the best offered at any Israeli brunch.About a dozen choices are served with the freshest of vegetables – eggplant, mushroom, avocado, carrots, beets, cauliflower, swirled among fresh herbs. Vegans should have no problem leaving very satisfied. Chef Anat Ottolengui clearly didn’t go by any formula, evidenced by the fact that the salads kept changing throughout the afternoon.On the other side of the salad bar is a cheese buffet with platters of chunks of locally made cheeses such as Gouda, Camembert, tome, Monzhego, and Cacopttoia. Create your own bread basket and plate of local olives and jams for a cheese experience in itself justifies the NIS 139 price of the buffet.For deli lovers, a platter of cold cuts and smoked herring, along with appropriate condiments, is neatly laid out next to the cheeses.The brunch offers a selection of hot dishes as well. These include chicken drumsticks in a hearty tomato sauce; a pot roast that tastes homemade; pasta; lamb osso buco; and St. Peters fish.Whether it’s due to filling up on the salads and cheeses or the contrast between cold and hot or a lack of seasoning perfection, most of the hot dishes did not offer the same satisfaction as the salads. They were more like a bonus compared to everything that came before.At most hotel buffets, dozens of desserts are offered. Here, however, aside from some croissants, only two selections are offered: chocolate cake and cheesecake. The chocolate cake – almost flourless – was the crowning jewel. Along with American drip coffee, it was an excellent way to top off a fabulous meal – one that you should take your time to savor, one that does justice to the view of the Kinneret, and one that will give you the strength to walk back out, beyond the walls, to Tiberias.The writer was a guest of the restaurant.Scots Hotel
Not kosher
1 Gdud Barak St.,Tiberias
Fridays and Saturdays, 11:30 a.m. to 2:30 p.m.