May the force be with you? Turkey fears rise of religion of 'Jediism'

According to the Turkish daily 'Hurriyet', a university professor wrote an article in official state-sanctioned media warning of the rise of a Jedi movement among Christians. 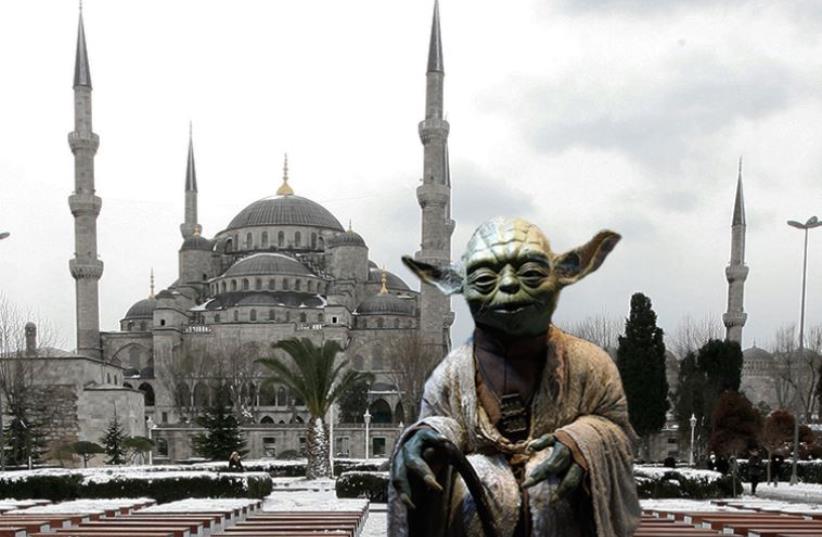 Yoda next to the Blue Mosque in Istanbul
(photo credit: REUTERS,JPOST STAFF)
Advertisement
A Turkish theologian believes that the newest threat to the world order may be a brand new religion - "Jediism."According to the Turkish daily Hurriyet, a university professor wrote an article in official state-sanctioned media warning of the rise of a Jedi movement among Christians."Jediism...is spreading today in Christian societies," Bilal Yorulmaz, an assistant professor at Marmara University, writes in the latest issue of the government's Directorate of Religious Affairs' monthly magazine. "Around 70,000 people in Australia and 390,000 people in England currently define themselves as Jedis."In the sci-fi-action-adventure blockbuster Star Wars series, the Jedi is a special class of wise intellectuals and poet-warriors dedicated to good deeds and spreading justice throughout the universe.Perhaps the most recognizable adherent of the Jedi ideology is Yoda, the Grand Master of the Jedi Order who trained some of the more formidable warriors, including Obi-Wan Kenobi and Luke Skywalker.In recent censuses, a number of people in Western countries listed their religion as "Jediism," although many took this to be a tongue-in-cheek attempt at humor.Earlier this year, Turkish students signed online petitions - which many took to be jokes - advocating the construction of more Buddhist temples and "Jedi" houses of worship.Apparently, though, not everyone got the joke.