Mayweather says next fight will be his last; Pacquiao said he thought he had the fight won. 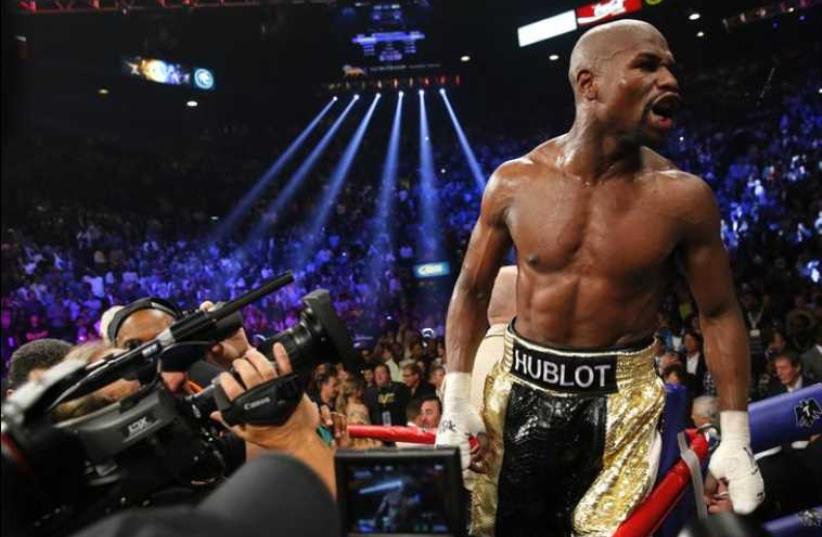 Floyd Mayweather Jr. of the U.S. yells out to the crowd after defeating Manny Pacquiao of the Philippines in their title fight in Las Vegas, Nevada, May 2, 2015.
(photo credit: REUTERS)
Advertisement
LAS VEGAS - Floyd Mayweather Jr. cemented his place among the pantheon of boxing greats by improving to 48-0 with a unanimous decision over Manny Pacquiao on Saturday in a fight that lived up to its immense hype and price tag.Mayweather weathered an early assault by the Filipino southpaw and then won the later rounds to finish ahead on all three judges' scorecards in a welterweight showdown that is expected to be the top grossing prize fight of all-time."When the history books are written, it was worth the wait," Mayweather said in the ring after a fight that was over five years in the making.Though Pacquiao repeatedly forced Mayweather to backpedal, the wily American blunted his opponent's best efforts by using his renowned defensive skills while getting in several telling jabs and punches of his own.Mayweather and Pacquiao had promised to deliver on years of hype and give fans their money's worth and were true to their word in delivering everything but a knockout."Manny Pacquiao is a hell of fighter, I see now why he is at the pinnacle of boxing," Mayweather said after an emotional embrace with Pacquiao. "I'm a smart fighter, I outboxed him."We knew what we had to do. He's a tough competitor ... a very awkward fighter and I had to take my time and watch him closely."Mayweather is guaranteed at least a $120 million payday from the title bout that had been dubbed the "Fight of the Century" and he said in the ring that his next fight will be his last."My next fight in September will be my last and I will retire 49-0," said the 38-year-old American.The 16,800 spectators packed an MGM Grand Garden Arena that crackled with energy as the rich and famous settled into their ringside seats.Actors Clint Eastwood, Robert De Niro, Mark Wahlberg and Denzel Washington rubbed shoulders with sports celebrities such as Michael Jordan, New England Patriots quarterback Tom Brady and billionaire Donald Trump.With ringside seats commanding six-figure sums on the resale market even the very wealthy and very famous were forced to call in favors to secure a golden ticket while an estimated 150,000 to 200,000 fight fans flooded into the desert gambling capital to be part of the buzz."It is a good fight. I thought I won the fight. He didn't do nothing. He always moved outside," said Pacquiao, who dropped to 57-5-3. "I got him many times. I threw the punches and I thought I won the fight."