Meatery provides everything a real meat lover looks for. 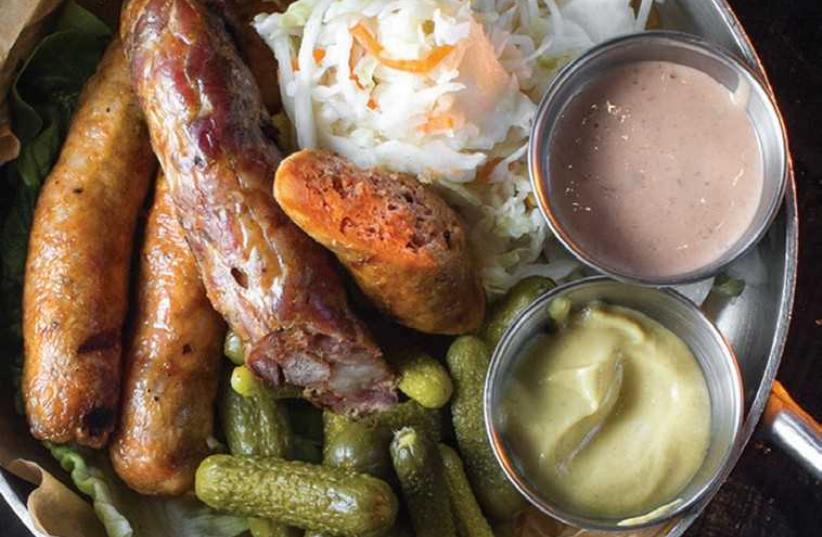 'Meatery' restaurant
(photo credit: PR)
Advertisement
For most of us, there comes a time when we are really in the mood for meat. Not the casual roast beef sandwich but a good cut of beef grilled to perfection. Meatery provides everything that the real meat seeker loves.Here in Hatahana, one of the most historical areas of Tel Aviv, old meets new, and Meatery embraces all of the old train station’s magic. As soon as we entered, we knew the atmosphere would be amazing.The interior is much like the restaurant itself – classy and warm, yet modern. A bar functions as the centerpiece of the restaurant, and customers can sit there for a quick drink or at one of the surrounding tables. With its large glass windows, the restaurant is great for observing all the weird and wonderful activities taking place along Hatahana.I asked the wait staff to order for us and bring us a sample of the must-try dishes, along with some of their own favorites. We started with the mushroom stew and smoked artichoke (NIS 44), which was perfect for a chilly night. The dish had incredibly thick flavors and was very earth and creamy. Next up was the chicken liver paté (NIS 42) with toasted bread, nuts and orange jam. It was very good. It did have that slight metallic taste that’s apparent in all liver, but Meatery does a great job of toning it down. A great and subtle paté.This was followed by the veal schiacciata (NIS 57). The veal was nice and tender, and the sauce was really tasty. I loved the spicy lemon zest. The flavors were spectacular together. A must try! After a bit of a breather, we were presented with a meat platter (NIS 180) fit for royalty. It included veal spare ribs, veal pichana, untrib, vacio and merguez sausages. Everything was delicious, especially the pichana which was perfectly cooked and tender. We also loved the merguez sausages (for those who don’t like spicy, the sausage is spicy). Another favorite was the ribs – served dry as all good barbecue should be. They had a great smoky flavor, which had infused itself through every bit of the meat. It’s a very distinct flavor and also quite strong, as I was still able to taste it several hours later. It had a good crispy bark, but not too much.Honestly, I would say it was the perfect amount. The platter came with baked potato and homemade pickles on the side.We ordered hot drinks and took another breather. Then came dessert.We opted for the heavenly citrus creme brulee (NIS 39), as well as the Snickers in a jar (NIS 26). Both were small but rich enough that a few bites sufficed to satisfy our sweet tooth.Overall, it was a great satisfying meal that really hit the spot when craving some real barbecue. This is not an elegant dining establishment.It is a place for serious meat eaters. I will definitely be going there again.The writer was a guest of the restaurant.Meatery
Not kosher
Hatahana complex, Neveh Tzedek, Tel Aviv
Tel: (03) 516-0008