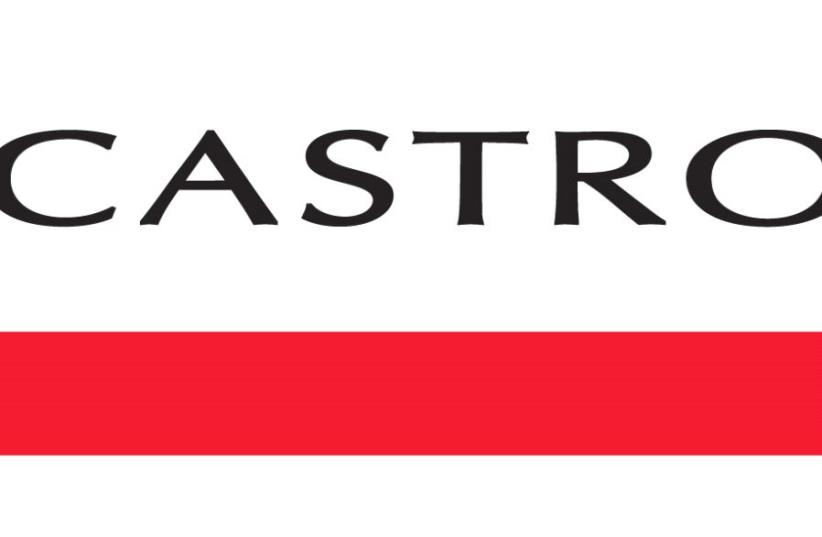 Castro Logo
(photo credit: PR)
Advertisement
■ WITH CASTRO as the general trendsetter for Israeli fashion, it looks as if we are in for a retro spring/summer revival of Fifties, Sixties and Seventies styles, running the gamut from micro, mini to maxi, in soft, romantic fabrics, in gentle hues and prints, in mostly loose silhouettes, which include A-line and empire-line cuts and lots of frills, flounces and tiers.The truth is that any young woman in her mid-teens to late twenties should raid the back of her grandmother’s wardrobe before she goes shopping. She may find a treasure or two that will complement some of the offerings in the collection launched by Castro co-directors Eti and Gabi Roter at their Bat Yam International Showroom which was redesigned to look like a giant swimming pool for the showing of what they call their Night Swimming spring collection.Yes, there were a couple of swimwear items, but these were in fact a very minor part of the collection. The retro aspect of the menswear went further back in time than the womenswear, and one of strong features of male attire this spring and summer will be the short-legged suit, which will be great for men with nice legs but may spoil the sex appeal of men with knobbly knees.The show, featuring 80 male and female models, was led by Castro’s current chief presenters – actress and fashion model Dar Zuzovsky and actor and fashion model Omer Dror.Spotted in the crowd among those who came to see the latest efforts of Castro’s creative team were singer Josie Katz, models Yael Goldman and Rotem Sela, who is married to Ariel Roter, who represents the fourth generation of the family in the fashion business, television personality Tom Baum, former Miss Israel Ravit Asaf, Cinema City co-owner Moshe Edery and his wife, Pnina, Ofer Shopping Malls CEO Moshe Rosenblum, Gindi Investments CEO Manor Gindi and his wife, Bat El, and Azrieli Shopping Malls CEO Arnon Toren, among many other well-known faces on Israel’s society circuit.
■ TEL AVIV Museum is the venue this Friday at 1:30 p.m for the Israeli premiere of Tova Ascher’s award-winning film A.K.A. Nadia, before its release to cinemas around the country. In a nutshell, the plot is about an identity crisis – not the usual kind, but one that leads to many complications.Nadia is a 20-year-old Arab woman involved in a secret romance with Nimer, who is a PLO activist. For a variety of reasons they relocate to England, where Nimer is apprehended by law-enforcement authorities, and Nadia is left to fend for herself.She obtains an Israeli passport from a shady character and thus acquires the identity of a young Israeli woman called Maya. She returns to Israel and begins a new life, becoming a dancer and choreographer, getting married to a Jew and giving birth to their two children.Fast-forward 20 years into her Israeli-Jewish identity, Maya is a successful choreographer. Her husband, Yoav, is an official at the Justice Ministry. All of a sudden, without warning, Nimer reappears in her life, and her past begins to catch up with her. Fearful of being found out, her personality begins to change, and with it her behavior. Yoav realizes that she is hiding something, but cannot even begin to guess what it is.The film stars Neta Spiegelman, Oded Leopold and Ali Suliman, with John Hurt in one of his last film performances before his death last week. Ascher and some of the film’s cast will have a Q&A with the audience after the screening.
■ ANOTHER, SOMEWHAT older prizewinning film is Sweet Mud, presented by the Tel Aviv Arts Council in its Israeli Cinema series. The film, with Hebrew dialogue and English subtitles, is a satirical drama set in a progressive kibbutz in the mid-’70s. Twleve-year-old Dvir Avni navigates between maturing, as he prepares for his bar mitzva, the values of equality learned at home, and his relationship with his unstable mother, who has been denounced as mentally ill by members of the kibbutz.The film received four 2006 Ophir Awards from the Israeli Academy of Film and Television (Best Film, Best Music, Best Production Design, Best Sound) and six other nominations (Best Actor, Best Actress, Best Director, Best Screenplay, Best Costume Design, Best Editing). It also won the World Cinema Jury Prize (Dramatic) at the 2007 Sundance Film Festival and was Israel’s official submission for Best Foreign Language Film at the 2007 Academy Awards.Following the screening at the Tel Aviv Cinematheque on Tuesday, February 7, at 8:45 p.m., there will be a Q&A session with the film’s director and writer, Dror Shaul, who was born in 1971 on Kibbutz Kissufim, three kilometers from the Gaza border, and who currently lives in Tel Aviv. Much of his youth became the setting for this film and his other award-winning film, Mivtza Savta (1999).