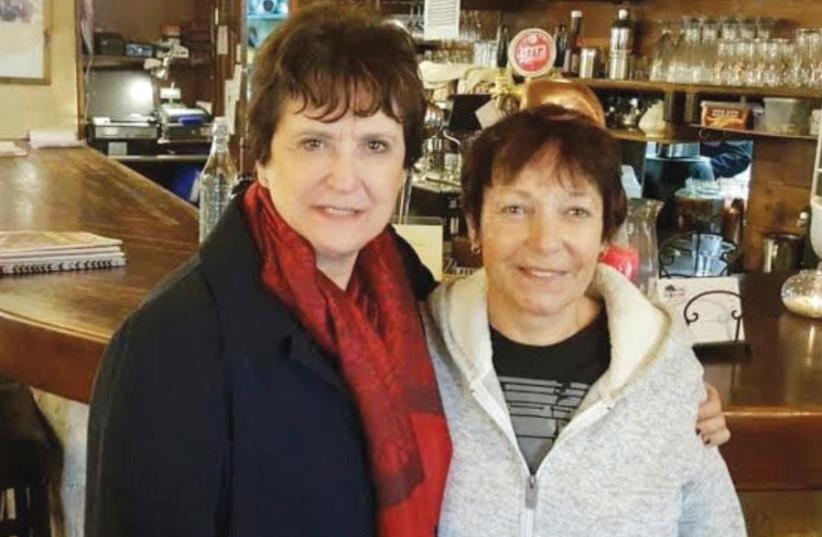 Canadian Ambassador Deborah Lyons (left) with hotel proprietor Miriam Hod-Fine in Metulla
(photo credit: PR)
Advertisement
■ AT MODEL United Nations conferences, potential young orators hone their debating talents. Among the guest speakers at the nationwide Model United Nations Conference hosted by Bar-Ilan University last week was Deputy Chief of Mission at the British Embassy Tony Kay OBE, who reiterated assurances that British parliamentarians gave to Israel – that BDS and antisemitism are unacceptable to their government.“From a UK government perspective, we are clear that antisemitism is unacceptable, full stop,” said Kay. “We are putting forward measures to tackle any antisemitic behavior in the UK. We take this seriously. We have something called the Community Security Trust that monitors the Internet and the media, and where members of the public can report antisemitic behavior. Via CST we provide a lot of financial support to the Jewish community across the UK to ensure that they can live peacefully and safely, and we’ve just adopted a formal definition of antisemitism. Our position is clear that boycotting or sanctioning Israel is unacceptable.”Addressing Model UN student representatives, Kay shared his three top tips for becoming a successful diplomat. First, he said, is authenticity. “Be yourself. Celebrate your diversity. Stand out from the crowd.” Second is belief.“Believe in your qualities, talents and intellect. Don’t be afraid to take yourself out of your comfort zone and challenge yourself.” The third ingredient is communication. “Understand the country in which you are serving and explain it to your government and contacts back home. Also, be loud and proud in promoting your own country where you are stationed.”Bar-Ilan University president Rabbi Prof. Daniel Hershkowitz echoed the government line, rooted in the Bible. “The way to handle conflict,” he said, “is through dialogue. This is the way to bridge gaps between societies, cultures and religions. It is the way to build a better world.”Similar advice was given by Bar-Ilan dean of students Prof. Uri Nir.“Jewish tradition encourages interaction between an individual and society,” he said.“When you interact with others, even if you differ in point of view, it enriches you. As future leaders I encourage you to develop your verbal skills. I also expect you to develop your own opinions so that all of your interactions with others will turn our world into a better place.”
■ ALL CANADIAN ambassadors to Israel go to Metulla, where Israel’s only permanent ice-hockey rink is situated, in Canada House. Canada’s new ambassador, Deborah Lyons, has become acquainted with both Canada House and Metulla, and while in the northern town, spent time at Beit Shalom, a boutique hotel where modern architecture blends harmoniously with old stone houses that date back a century and housed pioneer farmers. The exquisitely crafted hotel is a lifetime achievement of Miriam and Haim Hod-Fine. Enchanted by the hotel and its environment, Lyons promised Miriam Hod-Fine that she would return.But her primary reason for being in Metulla was to watch a game of ice hockey. A few weeks back when she presented her credentials, she invited President Reuven Rivlin to come and play ice hockey in Metulla. She is probably the only head of a foreign mission in this country who can use ice hockey to strengthen relations between her country and Israel.
■ FRIDAY MORNINGS at Beit Leivik in Tel Aviv are reserved for schmoozing in Yiddish. Today, there will be a special guest in the person of Haike-Bruria Wigner, poet and Yiddish Studies lecturer at Oxford University.Her poems have been published in several Yiddish periodicals. The meeting at 30 Dov Hoz Street begins at 11 a.m.
■ IN ITS 12th year, the Eilat Chamber Music Festival, under the patronage of the Dan Hotel chain, is being held for the fifth consecutive year at the Dan Eilat. To launch this year’s festival, Dan Hotels CEO Rafi Sadeh hosted a reception in the presence of Eilat Mayor Yitzhak Halevi, members of the city council, festival organizers headed by Leonid Rosenberg, singer and song writer Alon Olearchick, cellist Yoed Nir and pianist Guy Mintus, who are appearing at the festival, and lovers of chamber music. There was a surprise performance: Olearchik and Nir performed some of Olearchik’s best-known songs.
■ LAST WEEK 103-year-old Rabbi Aharon Yehuda Leib Shteinman, respected as the greatest living authority in Jewish Law, was discharged from hospital. Soon afterward, Steinman had another reason to be pleased: his great-grandson Yaakov Israel Shteinman announced his engagement. The young man’s pedigree includes some of the most prestigious of haredi families, such as Kaniewsky, Karelitz, Elyashiv and Levin. In those families, just inviting relatives will fill a banquet hall.
■ YAD SARAH, founded 40 years ago by Uri Lupolianski, who later went became mayor of Jerusalem, is one of the largest volunteer organizations in the country with more than 6,000 volunteers working at more than 100 branches. The Herzliya branch at 81 Nordau Street, which had been closed for some time, has reopened and is managed by Tzipporah Tenami, with 18 volunteers under her supervision.Open from 10 a.m. to 1 p.m. Sunday to Thursday and until noon on Fridays, the branch offers individuals with special or temporary needs medical equipment: wheelchairs, walkers, crutches, canes, oxygen tanks, inhalers, steamers, cribs, breast-milk pumps, etc. Items are cost-free; a deposit is refunded when they are returned. One important item available is a bracelet with an emergency button that sends a signal to a central exchange. The device works automatically when the person falls and can’t press the button.