Minister visits Shalva's National Center for the Care and Inclusion of Persons with Disabilities in Jerusalem. 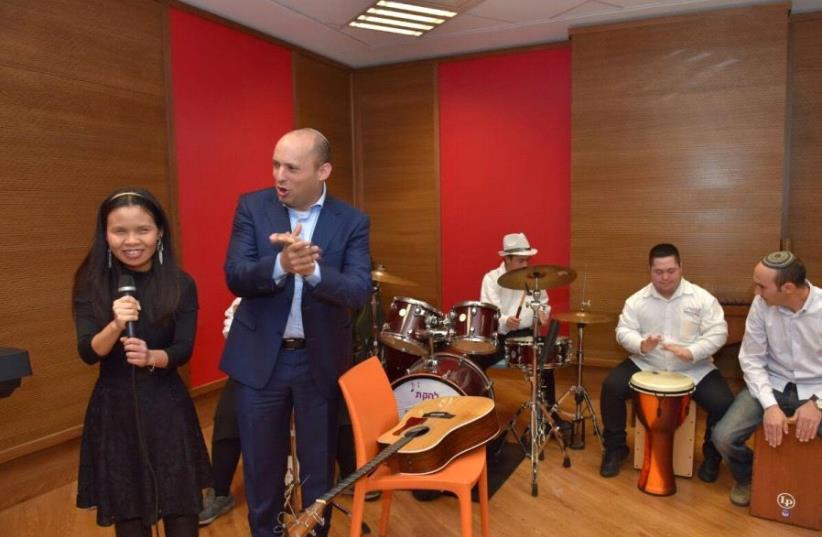 Education Minister Naftali Bennett joins Shalva band on guitar
(photo credit: Courtesy)
Advertisement
Education Minister Naftali Bennett visited Shalva's National Center for the Care and Inclusion of Persons with Disabilities on Monday.  The minister moved those present when he joined the members of Shalva's band on the guitar.  The Shalva Band is made up of children with varied disabilities and has met with great success, having performed at the President's house and at many venues throughout Israel and the world.Shalva's National Center is located in Bayit Vegan, in Jerusalem. Shalva was founded by Malki and Kalman Samuels, parents of Yossi who became disabled at 11 months of age. As a result of a tainted vaccination that he received, Yossi became blind and deaf.  His parents saw the need for establishing an institute for children with disabilities, like Yossi.  Over the years, the organization has expanded, most recently with the opening of the new center, at a cost of over NIS 250 million.Minister Bennett, as part of his tour of activities in the center, affixed a mezuzah in the music therapy department.  "Shalva teaches us to see the abilities and not the limitations.  Every child has his own potential, and with our faith in their abilities, and with the proper investment, people with disabilities can become equal members of society."  Avi Samuels, the Chairman of Shalva, said, "We were very excited to host the Minister of Education and to show him the center and its many programs, as well as to hear from the MK of his desire to work with us to advance and integrate children with disabilities into society."