The former NRL player and potential NFL draft received backlash from Jewish groups after tweeting that Jews were responsible for Jesus' death. 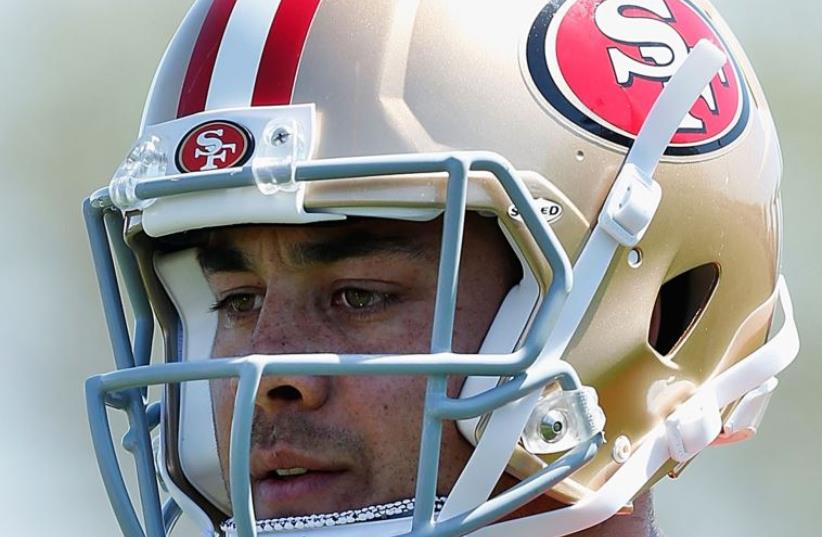 Rugby star and potential San Francisco 49ers player Jarryd Hayne
(photo credit: LACHLAN CUNNINGHAM / GETTY IMAGES NORTH AMERICA / AFP)
Advertisement
Jarryd Hayne is an Australian rugby star trying to make an unusual transition to the NFL as a potential member of the San Francisco 49ers.He also seems to be trying to stir up a millennia-old anti-Semitic debate.“Jesus wanted to help people but was killed by his own people,” Hayne tweeted on July 1. A day later he added: “The Jews were the people who took him [Jesus] to the Romans n [sic] forced them to give the order because they couldn’t.”“It’s a pity that Mr. Hayne is so ill-informed that he doesn’t know that in 1965 the Vatican rejected this charge,” Dvir Abramovich, chairman of Australia’s B’nai B’rith Anti-Defamation Commission, told the Australian Jewish News."For thousands of years Jews were held in contempt and were persecuted and murdered because they were labelled as Christ-killers," Abramovich said in a statement, reported the Sydney Morning Herald."Rather than fuelling anti-Semitism, we need sportspeople to be powerful voices in countering racism and Jewish-hatred, especially when attacks against Jews worldwide are on the increase."Hayne deleted the tweets on Friday.Hayne, 27, has been one of the best rugby players in his country for years. He is currently trying to earn a spot on the San Francisco 49ers, likely as a kick returner.In 1965, the Vatican issued the Nostra Aetate, which officially stated that the Jews were not responsible for the death of Jesus.