The epic ‘Carmina Burana’ will be performed at Masada. 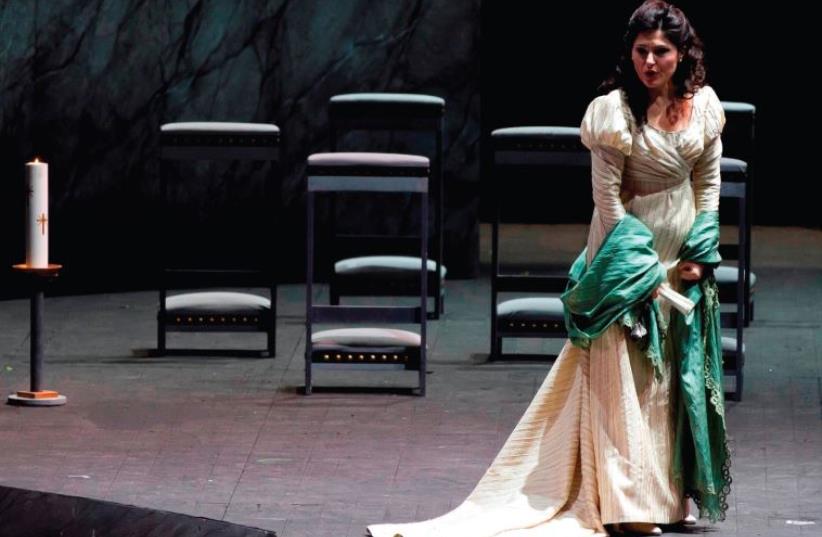 The Opera Festival in Masada. Svetlana Vassileva in Tosca.
(photo credit: RAMELLA)
Advertisement
James Judd says he is prepared for anything. As the British conductor was just about to start a rehearsal with the Israeli Opera Chorus ahead of two performances of Carl Orff’s scenic cantata Carmina Burana, which will take place at Masada on June 5 and June 12 (both at 10 p.m.), that isn’t a bad state to be in. In fact, Judd was referring to the meteorological conditions he might be faced with when he gets down to the desert site, after enduring 39 degrees of heat in Tel Aviv on the day we chatted, but it is safe to say that he and his instrumental and vocal charges will be ready “for anything” by the time the concert slots come round.The Carmina Burana production features in this year’s Masada Opera Festival, which takes in two grandiose productions involving hundreds of participants, an international cast of soloists, choirs, actors and even dancers.And while Judd may well be ready for any eventuality, at least in one respect, he is about to dive into uncharted waters.“I’ve never done this work in a staged setting before,” he says. “I know very little about what’s going to happen – deliberately so.”That might sound a mite risky.Surely, with more than 30 years of podium experience, Judd isn’t opting for a go-with-the-flow approach to the concerts that will be performed in one of the most dramatic and emotive settings in the world.“I am waiting to be surprised, shocked and delighted,” he declares.Before any prospective ticket buyer out there immediately rethinks their plans to make it down to Masada for either of the shows, Judd has no intention of maintaining anything other than a supremely professional and scrupulous mindset in preparing for the gala performances. The aforementioned wonderment element refers purely to the visuals of the production, which will be overseen by Polish director Michal Znaniecki, with commensurate support from Italian set designer Luigi Scoglio, Polish costume designer Magdalena Dabrowska and compatriot lighting and video designer Bogumil Palewicz. And Judd will have plenty of familiar friendly faces around him when he takes the Masada stage, as his many high-profile tenures around the world include serving as music director of the Israel Symphony Orchestra Rishon Lezion, the Israeli Opera’s regular instrumental ensemble. The alluring highenergy vocals will be taken care of by the Israeli Opera Chorus, along with the female Ankor Choir.Judd is eager to get down to the desert and is highly enthused about the rendition of the work he will preside over. Carmina Burana is considered to be one of the most emotive and sensual compositions of the 20th century, and the conductor says his job is just to let the music do the talking.“It is a bit of an old cliché, but in a sense you just do what is written; the piece plays itself. The rhythm comes from this kind of insistence, and once you start a piece, that’s it.”Carmina Burana, composed by Carl Orff in 1935 and 1936, is based on 24 poems taken from a manuscript comprising 254 poems and dramatic texts, mostly from the 11th and 12th centuries. The lyrics of Orff’s work are in Latin, and there will be surtitles in English and Hebrew at Masada.“Each piece is so cleverly and clearly written, and it relies on incredible crispness and articulation and, obviously, diction and hypnotic repetition of text and colors,” says Judd.That may sound like a lot to take on board, but Judd believes that Orff has provided conductors and instrumentalists with plenty of reference points to get it right.“It’s there if you look at what Orff has written. It’s all absolutely there to the last detail,” says Judd, although adding that some of the complementary notation can be a bit challenging.“Sometimes there are strange things in there. He writes commas all the time which, as I understand it, is often more to do with the shape of the text rather than taking time, or even breath. It’s very interesting. When you look at the score, you think, ‘What’s all that about?’ Sometimes you traditionally interpret the commas to be a little break, and other times it’s merely indicating the phrasing and the clarity of the paragraphs of text,” he says.It may all be spelled out, but Carmina Burana is a demanding work and all the “i” dotting and “t” crossing has to be gotten down pat if it is to performed in a proper and compelling manner.With Judd at the helm of the musical proceedings and with the incomparable desert setting, not to mention all the added manmade esthetics that will be laid on for the two performances, the Masada audiences are in for an occasion to remember.For tickets and more information: http://opera-masada.com/; Bimot *6226 and Arkia *5758