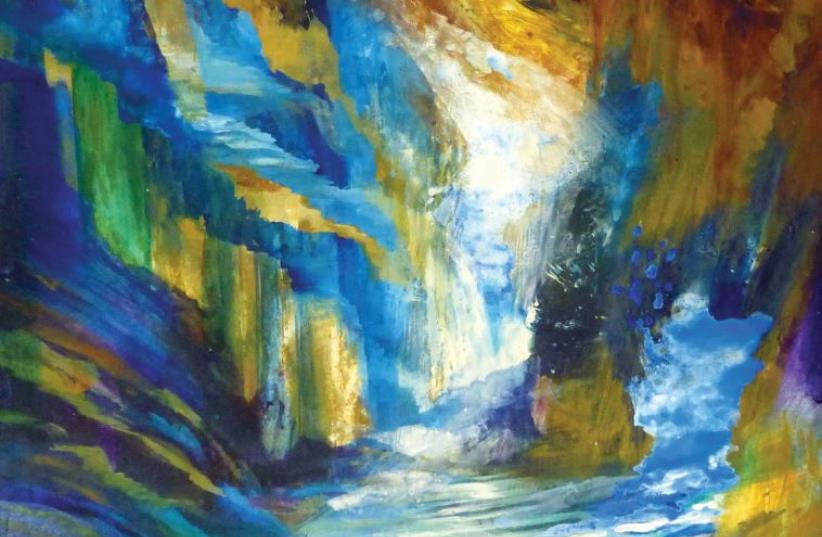 Painting by Yoram Raanan
(photo credit: YORAM RAANAN)
Advertisement
Rabbi Nahman of Breslov tells a tale of a king who was beside himself because his only son was behaving like a rooster: He divested himself of all of his clothes, romped about under the table, ate corn and fodder and would only emit sounds of “cock-a-doodle-doo.”When all of his trusted doctors failed to find a cure, he sought in desperation the advice of a rabbi. The first thing the rabbi did was disrobe, get under the table and introduce himself to the hapless prince as a fellow rooster. After several days of cock-a-doodle-doing together, the rabbi began to eat real food.“You can be a rooster and still enjoy a scrambled egg and vegetables,” said the sage – and the prince joined him in the meal. And so, stage by stage, the rabbi brought the prince out from under the table and into the world of human discourse and relationships.But in order to effectuate the cure, the rabbi himself had to enter the quasi-animal world of the diseased prince.But then why leave the hallowed halls of the beit midrash (study hall) in the first place? Why attempt to purify those who are defiled if you run the risk of becoming defiled yourself? The answer is indubitably clear: That’s what love of Israel is all about! The Jewish leader, must love his people to such an extent that he is willing to sacrifice a portion of his own spirituality in order to bring those who have wandered far away closer to their religious roots. Rabbi Yisroel Salanter so defined mesirat nefesh, the commitment of one’s soul for Torah: It cannot mean giving up material opportunities for the sake of Torah, for that would be mesirat haguf (the commitment of one’s body); it must mean giving up a little bit of my portion in the World to Come so that my fellow Jew can have a portion as well.Perhaps that is the responsibility of leadership as well. After all, it can be justifiably argued that if the religious leader had done a proper job, no Jew would ever become defiled.What has this to do with the punishment of Moses? God told him to speak to the rock, and he struck the rock; he expressed displaced anger at a thirsty and complaining Jewish people. He even lashed out at them referring to them as “rebels,” criticizing not only their negative actions by ungratefully and unfaithfully kvetching for water but also denigrating their very personalities by classifying them as “rebels.”He had lost the ability to empathize with them, to “get under the table with them” and feel their discomfort – as he had done so effectively when they were slaves in Egypt and first began their desert experience. We cannot blame him for having lost patience – after all the ingratitude and rebellions he had suffered. But the irreversible fact is that in striking the rock to extract the water he demonstrated that he no longer had the requisite love for his people which is the primary requirement for Jewish leadership.The kohen-priest, on the other hand, scion of Aharon who “loves all creatures and brings them close to Torah,” takes the life-giving water of eternal Torah and transforms the dead ashes of the red heifer into the life-giving purity of the religious ritual; the kohen, representative of God, affirms the eternity of Israel and the ability of every Jew to be purified from death to eternal life through the continuity of the traditions of his people. And his love for Israel is so great that he is willing to defile himself in order to bring redeeming purity to his fellow Jews who have become impure.The third day of Tamuz marks the anniversary of the passing of the Lubavitcher Rebbe. In my eyes as well as in the eyes of countless others – even many who, like myself, never became real Lubavitcher hassidim – he was truly the leader of this past generation.From the time that I made the decision to become the rabbi of Lincoln Square Synagogue at age 24 until and including my aliya to Efrat and the establishment of the Ohr Torah Stone Institutions, I never made a significant move without seeking his sage advice. The one word that most characterizes his phenomenal style of leadership was his assumption of responsibility: He took responsibility for Jews all over the world, from Melbourne to Johannesburg to Auckland to Bangkok to Kiryat Malachi. He inspired hundreds if not thousands of his disciples to become his emissaries in communities throughout the world, each one assuming a small share of the enormously heavy burden carried with such grace and faith by their revered Rebbe.On a much smaller level, but armed with the blessing of the Lubavitcher Rebbe to produce Ohr Torah Stone emissaries who are “modern on the outside and Chabad on the inside,” we can now proudly state that we have our own Straus-Amiel and Beren-Amiel emissaries in approximately 400 synagogues and educational institutions throughout the world, from Perth, Australia to Putti, Uganda. Our Torah of light and love must suffuse the entire world. Shabbat shalom Rabbi Shlomo Riskin is founder and chancellor of Ohr Torah Stone institutions and the chief rabbi of Efrat. His latest book, The Living Tree: Studies in Modern Orthodoxy, is available from Maggid Books, a division of Koren Publishers Jerusalem.