Parshat Matot: Choosing not to choose

Man’s obligation to stand by his oaths and vows – and in general, to keep what he says – contradicts the concept of free will. 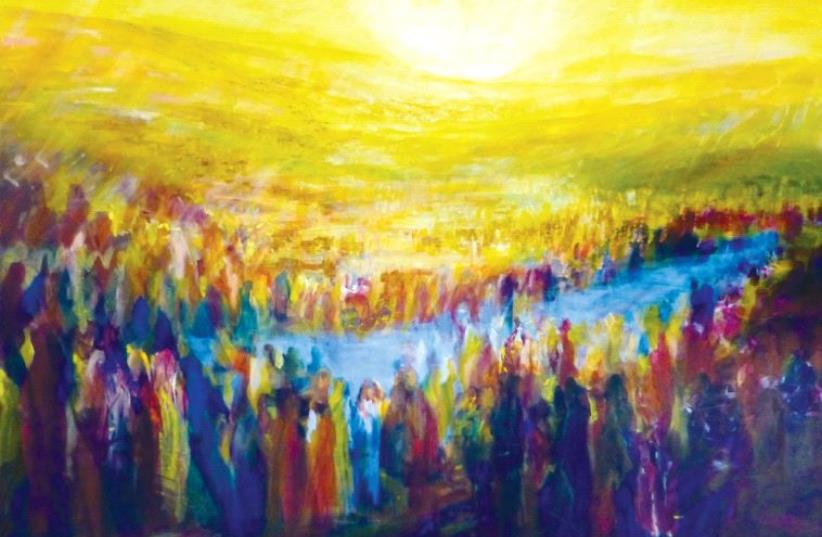 Painting by Yoram Raanan
(photo credit: YORAM RAANAN)
Advertisement
As human beings, one of our moral obligations is to stand by our word. In the eyes of Judaism, man’s speech is considered something “sacred.” Therefore, the non-fulfillment of an oath is considered “desecration,” as it says in this week’s portion – Matot: “If a man makes a vow to the Lord or makes an oath to prohibit himself, he shall not violate his word; according to whatever came out of his mouth, he shall do.” (Numbers 30:=3) Speech is considered the action that expresses man’s freedom. Therefore, we also say things like “expressing the voice of the populations whose voice is not heard in the public discourse.” In our portion, the term “speech” appears from a different, seemingly opposite, angle, as something that limits man’s freedom and free will, since vows and oaths obligate a person to act in a very specific manner, and not however he feels.Man’s obligation to stand by his oaths and vows – and in general, to keep what he says – contradicts the concept of free will.In its basic form, the concept of free will appears in the Torah as follows: “This day, I call upon the heaven and the earth as witnesses [that I have warned] you: I have set before you life and death, the blessing and the curse. You shall choose life, so that you and your offspring will live...” (Deuteronomy 30:19) According to the Torah, there are two paths: good, “life”; and bad, “death.” Free will allows a choice between these two paths with the Torah advising man: “You shall choose life!” Man’s ability to make an oath expresses a very high level of the power to choose. It is not only the choice between good and bad that are permanent and predetermined, but also the subjective determination of what constitutes “good” and what is considered “bad.” For example, a man who makes a vow never to eat apples – from here on, eating apples would be considered for him to be “forbidden” and “bad.” And on the contrary, if he makes a vow to eat apples, he will be obligated to do so. Obligations that man takes upon himself through the power of his speech do not express the deprivation of freedom, but rather a very high level of man’s ability to close off certain options for himself.The concept of marriage illustrates this idea. A couple chooses to build a life together and get married. This marital contract negates, in essence, the ability of each of them to choose another partner. The actual fulfillment of this contract is a result and an expression of choosing this specific partner. Meaning, the ability to choose and love a specific partner and to choose to have this strong connection to another is great as it negates the ability to choose someone else.As a rule, our sages determined that it is better for people to avoid making vows. However, man’s emotional capacity to make an oath can trigger personal growth. A person who wants to quit smoking finds himself caught in a battle between a healthy life and the gratification of a momentary drive. This person, instead of continuously fighting this battle, can use oaths as an adamant utterance to himself. “For me – smoking a cigarette is no longer an option.” This way, the person is taking away from himself the choice of putting a cigarette in his mouth. This is a process that requires training, but it is possible. It is choosing not to choose! Expecting man to keep his promises stems, therefore, from seeing him as a free person with the ability to make choices, including choosing not to choose, and then abiding by this decision with dignity. The writer is the rabbi of the Western Wall and Holy Sites.