It is a truth given over to human interpretation which admits the possibility of multiple truths emanating from different ways of expounding the same verse with different applications. 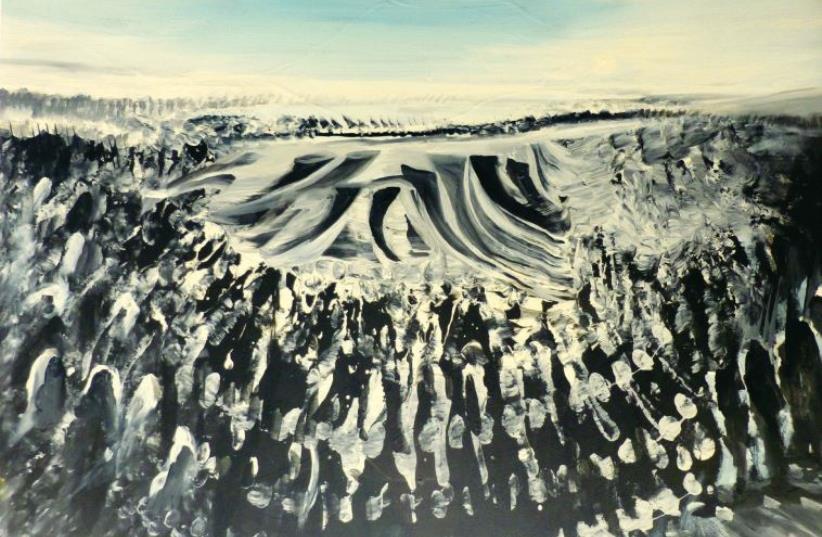 Painting by Yoram Raanan
(photo credit: YORAM RAANAN)
Advertisement
"Every daughter among the Israelite tribes who inherits a share must marry someone from a clan of her father’s tribe…. Thus no inheritance shall pass over from one tribe to another, but the Israelite tribes shall remain bound each to its portion" (Numbers 36:8, 9).It is fascinating that the concluding verses in the Book of Numbers hark back to the famous legal brief of the daughters of Zelophehad, who fought indefatigably for the right to inherit their deceased father’s lands. We saw earlier the great extent of their perseverance and perspicacity.They went from lower court to higher court until they reached the Great Court of Moses himself, at which point they challenged the great lawgiver with a knockout question on levirate marriage: If the birth of a daughter is sufficient to free the woman from the obligation of levirate marriage (yibum), it stands to reason that the daughter is empowered to inherit from her father; if not, and without the fallback possibility of marrying her brother-in-law, how can the young widow with a daughter be expected to support her family? Moses turned to God, and God confirmed the justice in the position of the daughters of Zelophehad: in the absence of male heirs, the females inherit their father’s estate. However, the portion of Masei concludes with an important limitation: the daughters who inherit must marry within their tribe, so that the land of the deceased father never leaves the tribal boundaries.Each tribe must be permitted to retain the integrity of the land apportioned to it initially.From this perspective, perhaps we are now enabled to understand why this issue is the “signature” conclusion of the entire Book of Numbers. This difficult and most tragic book is filled with the disappointment and despair of an entire generation doomed to death in the desert without even the opportunity of glimpsing the Promised Land. However, the faith of these daughters in the ultimate entry of the Israelites back into their ancestral home inspired these women to fight valiantly for their father’s land, and to emerge victorious.Moreover, the Book of Numbers likewise records the many trials and tribulations of Moses, the challenges to his leadership, the rebellion against his decisions.Here too, the eventual triumph of Moses is indubitably clear, since we herein receive a case study regarding land ownership which is ultimately adjudicated by Moses and accepted by all.The Hebrew Republic, with Moses as its initially acclaimed first leader and God’s Word as its ongoing constitution, manages to overcome unrest and upheaval and to steer the Israelite “ship” even in the foreboding and forbidding desert environment.And once again the “signature” conclusion: The Hebrew Republic is not to be homogeneous. Yes, the Hebrews have all been welded together into one nation, the children (family, if you will) of Israel; but the one family is comprised of 12 sub-families, 12 tribes and therefore 12 traditions. The daughters may have inherited the deceased father, but this inheritance is not absolute.They may not marry whomever they wish from whichever tribe he may emanate; the inheritance of the women must remain within their paternal family and the integrity of land rights of each tribe must be protected and respected. We are one nation, emerging from 12 tribes, just as the United States of America is one nation emerging from 50 states. Each state has its own traditions and values – and orchestrating between them can be exceedingly difficult, as the American Civil War proves. But a true and creative unity can only emanate from a plurality of ideas and traditions. The biblical model and the American success story proves the rule: not totalitarian rule of one autocrat but rather e pluribus unum, the one which emanates from the many; and only the Republic which is an amalgam of many different voices of a vibrant democracy has the wherewithal to provide unity without uniformity, to encourage creativity while still maintaining orderly justice.What is most fascinating to me is that our sacred Bible and its Oral Tradition of interpretation magnificently fits within this model. It is a divinely revealed truth given over to human interpretation throughout the generations, which admits the possibility of multiple truths emanating from different ways of expounding the same verse with different applications for different situations and even different individuals.As the Rabbis teach it: “For three years the Academy of Shamai and the Academy of Hillel disputed. These said, ‘The Halacha is like us’ and those said, ‘The Halacha is like us’. A thin Divine Voice descended and said, ‘these and those are the words of the Living God…’” (B.T. Eruvin 13b) The Mishna (Eduyot 1:5) magnificently explains that the reason for including also the minority opinion within the Oral Tradition, when the law is generally in accordance with the majority, is because a later generation (with different conditions) may decide to rule in accordance with the minority.For this reason, throughout Jewish history different religious courts existed side by side, one in accordance with the more stringent Academy of Shamai and the other more lenient in accordance with the Academy of Hillel. Nevertheless, “Those from the Academy of Shamai were not prevented from marrying women from the Academy of Hillel and vice versa” (Eduyot 4:8).It is on this basis that Rav A.Y.H Kook, the first chief rabbi of Israel explains the talmudic adage “Scholars increase peace in the world”: “True peace cannot enter the world without there being many different expressions leading to peace, all sides and all views… a multiplicity of ideas which emanates from different minds and different educational traditions is what enriches and spreads wisdom and establishes a true building of peace.”If only the Chief Rabbinate of Israel would allow for such a multiplicity of conversion courts to deal with the Israelis from the former Soviet Union. Shabbat shalom

Rabbi Shlomo Riskin is founder and chancellor of Ohr Torah Stone institutions and the chief rabbi of Efrat. His latest book, The Living Tree: Studies in Modern Orthodoxy, is available from Maggid Books, a division of Koren Publishers Jerusalem.
Painting by Yoram Raanan, .