This week, in the final words of the last of the prophets, we are taught that Elijah, who doubted his people’s faithfulness, will restore their relationship with God. 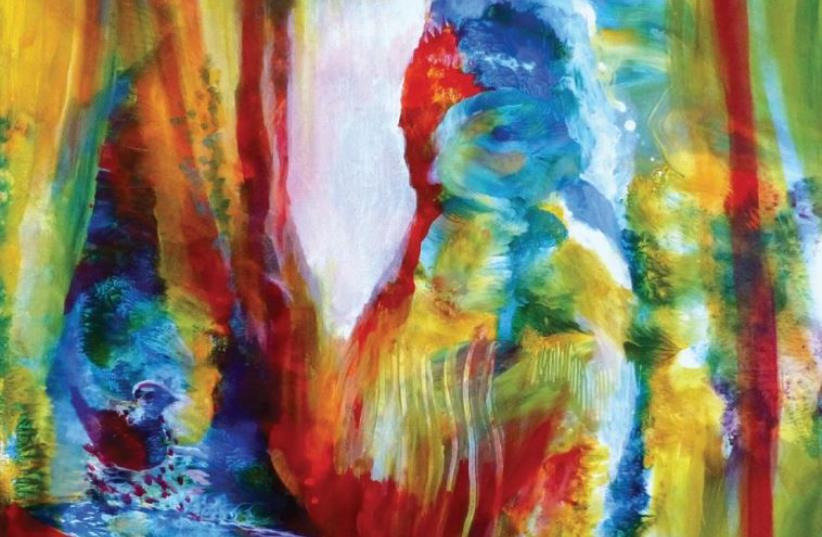 Painting by Yoram Raanan
(photo credit: YORAM RAANAN)
Advertisement
This shall be the law of the metzora on the day of his purification… the person being cleansed shall take two live, clean birds, cedar wood, crimson thread and hyssop. The kohen shall command that one bird be slaughtered into an earthenware vessel, over spring water. As for the live bird, he shall take it with the crimson and the hyssop and dip the live bird into the blood of the slaughtered bird… over the spring water. He shall then sprinkle seven times upon the person being cleansed from tzara’at, and cleanse him. He shall set the live bird free into the open field. (Leviticus 14: 2-7)

Painting by Yoram Raanan: www.RaananArt.com
“See, I will send the prophet Elijah to you before that great and dreadful day of the Lord comes. He will turn the hearts of the parents to their children, and the hearts of the children to their parents...” (Malachi 3: 22-23).Elijah the prophet has a great job, sipping wine at every Passover Seder. With approximately 14 million Jews in the world, that’s a lot of wine! But in this week’s special haftara for Shabbat Hagadol (the Shabbat before Passover), we are told that Elijah has a far greater challenge: to “turn the hearts of the parents to their children, and the hearts of the children to their parents.”Rashi explains that “the parents” (literally “fathers”) refers to God, and “the children” to the Jewish people.Elijah is tasked with restoring our relationship with our Creator. He will be the ultimate outreach worker, bringing all Jews back to their faith.Some commentators delve into the question of how an ancient prophet will reappear; we will not deal with that here. Instead, we will ask why Elijah was chosen for this role and how he will accomplish it.Tragically, today, some rabbis and Knesset members have lost patience with secular Jews. They reckon that by issuing condemnations and legislating coercive laws, they can bludgeon people into observance. Their aggressive stance only pushes people further from faith, which explains why we have so many “wicked,” “simple” and “silent” sons sitting around the Seder table.Elijah made the same mistake. Standing at Mount Horeb, he repeatedly complained to God that he was the only religious Jew left, because everyone else had “forsaken your covenant, thrown down your altars and slain your prophets with the sword...” (I Kings 19: 10 and 14).While in the Bible these words form part of a long monologue, the rabbis of the Midrash break up the speech, suggesting that each phrase responded to a specific question from God. “Why are you protesting my honor?” he asked the prophet. “Whose altars are they breaking, yours or mine? And whose prophets are they hurting, yours or mine?” (Shir Hashirim Raba 1:6). God apparently has no patience for the type of zealotry that led Elijah to complain about the Jewish people.At the end of this conversation, Elijah’s prophetic career is terminated and he is sent to appoint his successor (I Kings 19:15). We may not be perfect, but the job of a spiritual leader is to coax the Jewish people to improvement and to defend us before God, not to act as our prosecutor.Another version of the Midrash suggests that when Elijah complains about the people breaking the covenant, he is referring to their failure to observe the covenant of circumcision (brit mila). Here too, God is frustrated by the prophet’s lack of loyalty to his people. He declares that from here on in, Elijah must attend every brit mila, to witness the ritual and testify about how loyal the Jewish people are to God and his covenant.That is why to this day, at every circumcision ceremony, we reserve a chair for Elijah (Pirkei d’Rabbi Eliezer 28).This week, in the final words of the last of the prophets, we are taught that Elijah, who doubted his people’s faithfulness, will restore their relationship with God.Rashi tells us that this time, instead of cajoling them, Elijah will fortify the relationship based on love. This matches Rashi’s commentary on the Shema, where he explains that while fear and coercion may compel people to act religiously for a short time, only love can inspire an enduring relationship with God.Some years ago, I asked my friend Rabbi Yedidya Sinclair, then campus rabbi at Cambridge University, whether there were common denominators between the yeshivot whose graduates remained observant throughout their university studies and those whose alumni removed their kippot. He gave a fascinating answer.Yeshivot where rabbis demonstrably cared about their students’ character, happiness and welfare produced alumni whose religious commitment remained stable, whereas yeshivot where the focus was exclusively academic, with little concern for the students’ personal development, tended to yield graduates who were easily seduced into abandoning their faith.This idea was powerfully expressed in a story told by hassidic Rabbi Raphael of Bershad. A man once went to the Ba’al Shem Tov, the founder of hassidism. “My son is not obedient and he spurns our faith,” the man cried.“Then you must love him more,” replied the rabbi. When the man returned a few months later, bitterly complaining that he had seen no improvement in his son’s behavior, the rabbi’s response was decisive. “Then you must love him even more,” he said (Midrash Pinhas 38).This need for loving relationships is found in the Mishna, which takes the words of our verse literally.The Mishna explains that when the prophet says that Elijah will settle disputes between parents and children, this means that he will settle disputes among scholars and make peace in the world (Eduyot 8: 7).In fact, the two interpretations are closely related, for we cannot have a close relationship with God if we are fighting our family, colleagues and associates. Only love can restore our relationships to God, our family and peers.On Seder night, Elijah the prophet visits every Jewish home. The symbolism is poignant. God’s prophet does not just visit the rich, the famous, the scholarly or the saintly; he comes to every Seder, caring about every Jew.Rabbi David Kimhi (1160-1235) suggests that the children and parents will unite in rebuilding their relationship with God. As we sit around the Seder table, reading the Haggada, asking questions and sharing knowledge, we strengthen our families and reinforce our relationship with God. Elijah is already beginning his work as the ultimate outreach worker.May we all be blessed with a peaceful, happy Passover.Hag sameah!  The writer is the British United Synagogue’s rabbi in Israel.