Parshat Shmini: The red cow that points towards Redemption

So at this time of year, we are to focus on Temple purity, but how does this fit in with our reality? 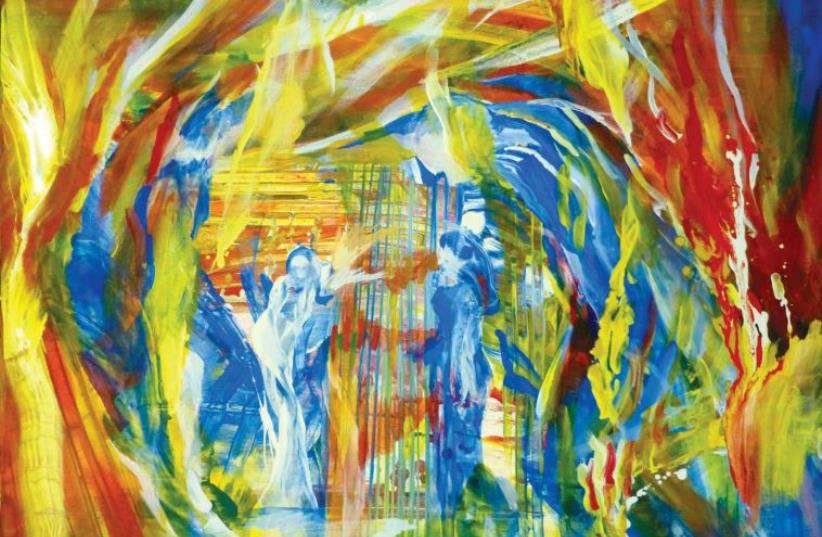 Parshat SHMINI
(photo credit: YORAM RAANAN)
Advertisement
This is the statute of the law, which the Lord has commanded, saying, “Speak to the children of Israel that they bring you an unblemished red heifer which has no defect and on which a yoke has never been placed.” (Numbers 19: 2)Painting by Yoram Raanan: www. RaananArt.com

Have you prepared your pre-Passover red cow? Don’t worry if you haven’t, you’re not alone. That’s why, this Shabbat in addition to the weekly Torah portion, we will read the biblical passage describing the purification process necessary for the Passover sacrifice, which utilized the ashes of a red heifer. (Shulhan Aruch, Orah Hayim 685:1) The ritual is one of our most obscure. Apparently, even King Solomon in all his wisdom despaired of ever understanding it. Moreover, today, it is impossible to perform it.Still, with extraordinary sensitivity, our rabbis pictured our ancestor Abraham’s concern that when the Temple lay in ruins, his descendants wouldn’t be able to attain purity or atone for their sins. He feared that as a result, they would suffer severe punishments. When he addressed his anxieties to God, the Almighty comforted him, saying: “Whenever they read the section dealing with the sacrifices, I will regard it as if they were bringing me an offering, and forgive all their sins.” (Megila 31b)So this week, in lieu of performing the rite, we read the passage of the red heifer, accompanied by its haftara, in which God promises to end the taunts of the nations, restore us to our land and purify us. (Ezekiel 36: 24-25). The Mishna Brura explains that we do so with the fervent prayer that we will soon be purified by these waters.Even so, with so many laws of Passover, the Seder and the counting of the Omer to study, why do we focus on such an impractical practice? Apparently, this purification rite is inseparable from Passover. A gorgeous midrash notes that the wording of the command to bring the Passover offering and the command of the red heifer are identical. It compares this to two elderly ladies who accompany one another home. Just as they need each other, so Passover cannot exist without at least some mention of its red heifer purification rite. (Exodus Raba 19: 2) So at this time of year, we are to focus on Temple purity, but how does this fit in with our reality? Recently I met a former member of the Jewish underground who was part of the plot to blow up the Dome of the Rock. I asked him what he does now. He told me that since he was released from jail, he has been planning the infrastructure for the millions of people who will converge on Jerusalem when the Third Temple is built.“Does that mean building lots of mikvaot?” I asked.“No, no,” he replied. “Our urgent priority is roads and toilets!” No doubt his groundwork will prove helpful, but with all due respect to preparing the plumbing, I suspect there are other, more spiritual preparations that the rest of us should be making.While we may not be able to undergo purification or offer Passover sacrifices, we can remove the hametz from our homes. In so doing, we fulfill an important mitzva that the rabbis reckoned carried immense symbolism.For them, the puffed-up appearance of bread symbolizes the arrogance and sinfulness that undermine our spiritual aspirations, while matza’s simpler appearance symbolizes a humbler, more spiritual existence.The Talmud tells us that Rabbi Alexandri would pray, “Sovereign of the Universe, you know that we wish to perform your will, but what prevents us? The yeast in the dough and our subjection to the foreign powers.May it be your will to deliver us from their hands, so that we may perform your statutes with a perfect heart.” (Brachot 17a) While conquering temptation may seem hard, Rabbi Avigdor Nebenzahl suggests that the yeast that transforms the dough into bread is actually just a chemical reaction that pumps the bread full of air. Sin is not insurmountable; we can make ourselves better people and our world a better place. That is what we try to do before Passover – purify ourselves and our homes as much as we can.My teacher, Rabbi Shlomo Riskin, stresses that when we reach the Passover Seder, surrounded by elderly relatives and young children, we don’t just recall the past, we also look to the future. As we complete the story of the Exodus, we not only thank God for deliverance from Egypt, but we also ask to celebrate future holidays and festivals in peace; rejoicing in the building of Jerusalem where we will serve God. We fill Elijah’s cup, since he is the prophet who will usher in the Messiah, and we sing songs at the end of the Seder that describe the overthrow of corrupt regimes and the rebuilding of the Temple in Jerusalem.These messianic beliefs look forward to a world purged of cruelty and filled with justice and loving- kindness.At the end of our days, when we face the heavenly court, each of us will be asked, “Did you yearn for the redemption?” (Shabbat 31a) This is perhaps another way of asking whether we strove to build a better world; whether our Judaism was just ritual performance or part of that great vision.By removing the hametz from our homes, singing songs about messianic times and reading about the red heifer purification rite, we imagine a world redeemed.A world in which all nations live together in peace and everyone comes to the Temple in Jerusalem to serve God. (Isaiah 56:7) Imagining it is the first step to creating it.

Shabbat shalom! The writer is the British United Synagogue’s rabbi in Israel.