Parshat Shoftim: Every human is a child of god

The Holy Temple was destroyed because the people forgot compassionate righteousness and moral justice. If we do not extirpate the wild weeds, can we dare expect the state to continue to stand strong? 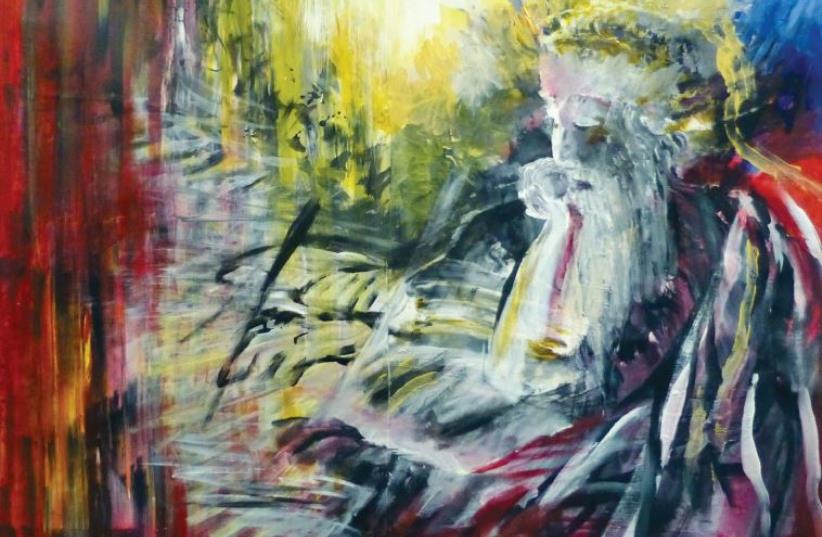 Painting by Yoram Raanan
www.Yoramraanan.comThis past period has been the first time since our aliya (immigration) 32 years ago that I question the future of the State of Israel; that I fear that this may not be the “beginning of the sprouting of our redemption.” (Deut. 16:20)Previously, I never doubted that no matter how great the odds were of defeating the enemies arrayed against us, as during the dark days leading up to the Six Day War and as in the frightening days during the early part of the Yom Kippur War, I always believed the promise of our prophets that we would emerge victorious, that even being isolated and alone with God is still being together with a majority of one, with the majority of The One, ultimately the only One who counts.However, nowadays I hear again and again in my inner mind the words of the prophet Isaiah in our Haftara of Ekev, “Your children must take heed quickly; those who destroy you and savage you are emerging from within you” (Isaiah 49:17). What our enemies have not succeeded in doing to us, our own Israeli citizens will do to us; our own children will destroy us by denuding us of our mission to the world, by removing from us our raison d’être, by turning the face of Israel into the face of Amalek.What is the mission of Israel? What is it that God expects us to communicate to the world? God stated this clearly and explicitly to Abraham: “Abraham shall surely become a great and mighty nation, and through him all the nations of the earth shall be blessed. For I have loved [chosen, singled out, known] him because he is instructing his children and his posterity after him to observe the pathways of the Lord, to act with compassionate righteousness and moral justice…” (Gen. 18:18-19) Yes, Greco-Roman culture may have bequeathed to western society a vision of the human being as the most complicated animal, a complex machine, struggling and striving against his peers for mastery on the basis of greater physical prowess and more strategic weapons of destruction. In this Darwinian world of man evolving from beast, in our cardboard jungle, the rule of thumb is “survival of the fittest” and “to the victor belong the spoils.”Virgil sang of armaments and male virility; Ulysses boasts that war tests the true fiber of the individual by distinguishing between the courageous and the cowardly, the strong and weak; Nietzsche suggested that a misguided anti-slave morality limited the rightful hegemony of the most powerful; and extremist Islam in all of its manifold fanatic Sunni and Shi’a manifestations (including Islamic State) revels in Allah’s world domination by the beheading sword of jihad.Hebraism entered the world with a very different vision of the human being, with a profoundly antithetical message for the families of the earth. “God created the human in His image” (Gen. 1:27); in the non-corporeal and spiritual image of God and not in the physical, rapacious image of the beast. Hence the human being, like the God who formed him in His Divine womb, has an inalienable right to be free, must be inviolate and inviolable; must be seen as an end in his/ her self and not as a means to another person’s end.Anything less than that would be a form of slavery! “And if one spills the blood of an innocent person, his blood shall be spilled [by a court of justice], because the human being was made in the image of God” (Gen. 9:7).What are the attributes of our God which comprise the essence of the divinity within the human, which must be emulated by the human? Not physical prowess, but spiritual grandeur: “Love, love, powerful in compassion and graciousness, long-suffering, abundant in loving-kindness and truth….” (Exodus 34:6).These gentle and sensitive words – not bloody and beheading swords – are what we are to communicate to all of humanity, because every human is a child of God, formed from His womb, endowed with the same Divine Natural Association (DNA) which makes all the families on earth loving siblings.Hence the mission of the Abrahamic nation state is to bring to the world compassionate righteousness and moral justice, demonstrating that it is right which will eventually triumph over might. Hence, we are commanded to “judge with righteousness between a man and his brother and his alien resident neighbor [stranger]” (Deut. 1:15). Hence, we are mandated to “pursue justice, justice”: just ends with just means, justice for the citizen and justice for the resident alien; justice for the respected householder; and justice for the miserable outsider (ibid 16:20).Now it appears that a Jewish extremist, terrorist murderer, firebombed homes of Palestinians in Duma village, killing and maiming innocent people and another Israeli fanatic knifed to death a participant in the Gay Pride Parade in Jerusalem. The Holy Temple was destroyed because the people forgot compassionate righteousness and moral justice. If we do not extirpate the wild weeds, can we dare expect the state to continue to stand strong? Can we countenance even a small minority acting like Amalek, taking advantage of the weaker vessels amongst us and legitimately expect to triumph like Israel? Shabbat shalom.Rabbi Shlomo Riskin is founder and chancellor of Ohr Torah Stone institutions and the chief rabbi of Efrat. His latest book, The Living Tree: Studies in Modern Orthodoxy, is available from Maggid Books, a division of Koren Publishers Jerusalem
Advertisement
Subscribe for our daily newsletter