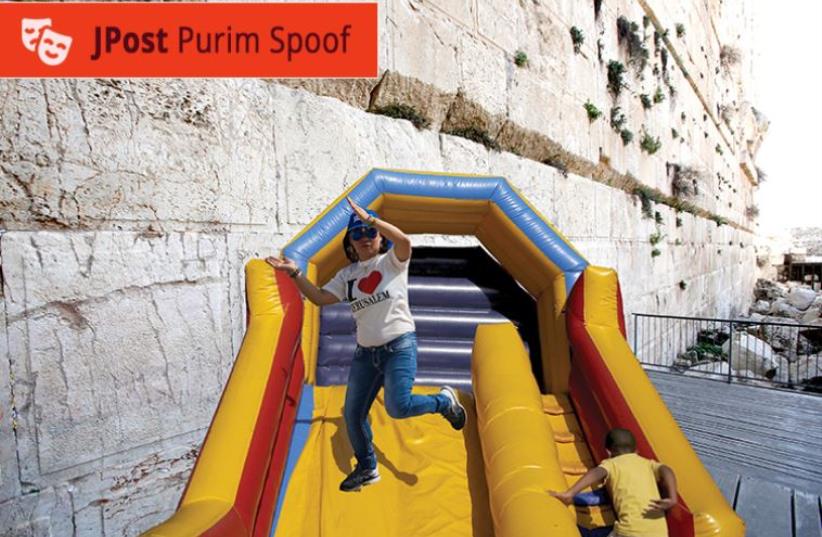 Could a bouncy castle’s lack of separate entrances lead to immodesty?
(photo credit: JROAST STAFF)
Advertisement
Days after a bouncy castle was installed at the Kotel a controversy is already brewing as dozens of Haredi rabbis have demanded that its exit slides be segregated between men and women’s sections. The initiative to install a large bouncy castle was launched last fall by the Union for Fun Judaism (UFFJ), and after quick discussions with the religious affiars ministry was given approaval to be placed below the Robinson’s Arch area.Initially religious groups greeted the decision with feigned-approval.“We have so many different controversies at the Kotel already, it seemed like this might go unnoticed,” said Rabbi Esther Hedgecrest of the UFFJ. Children visiting the Kotel and some adults enjoyed the idea of jumping up and down while praying, rather than bobbing back and forth. “Some religious experts said we were mocking Judaism, but in fact the castle has its own western wall, so we believe it makes the site more holy,” she said.Now Haredi groups have come together after learning that the bouncy castle does not have correct modest separation between the sexes and that mixed-gender entrances and exit slides could lead to “dangerous mixing,” according to a statement by the Very Orthodox Council of Ultra-Orthodox Judaism based in Bnei Barack.“There should be separate sections for men and women in the castle, and separate slides. Currently there is only one slide and men and women have been seen to congregate at the top before using it,” said Rabbi Meir Ba’al HaMishugah. “We propose having a separate male bouncy castle installed so as to stop this immorality.”Religious Affairs Minister Baftali Nennet visited the castle on Tuesday and after half an hour of jumping around said he felt the initiative had been a success. “It’s very difficult to stand in there, I was always falling down, it could use a bit more air, but besides that I think this really has the potential to change the experience for some here.” The Palestinian Islamic Waqf has condemned the castle as a Zionist conspiracy and “dangerous” change to the status quo that could “set the region on fire.” Government officials refused to comment on this status quo issue.