Sensitivity at the Seder table... 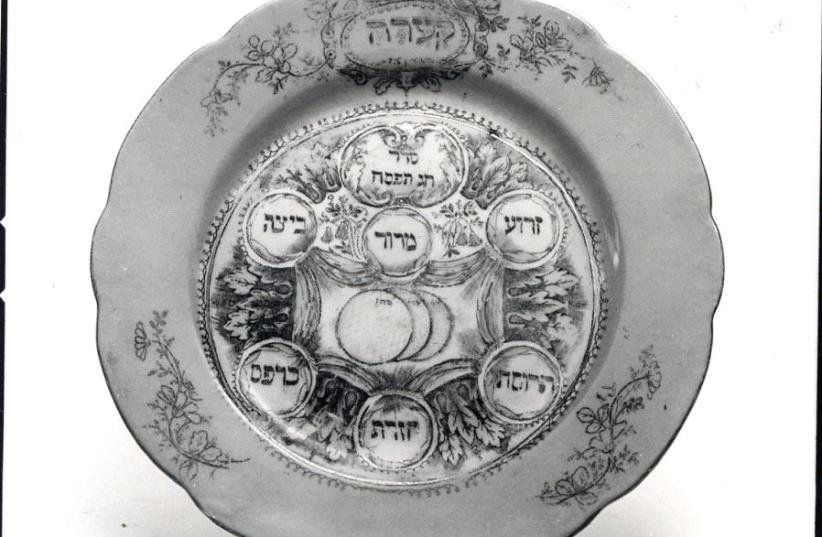 Porcelain 20th-century European Seder plate
(photo credit: ERETZ ISRAEL MUSEUM)
Advertisement
It’s that time of year again, when friends and acquaintances are asking each other that inevitable question: “Where are you for Passover?” While people who are hosting a Seder may talk at length about how many people they are having at the table, debating whether they should have a separate table for the children, people who are not hosting a Seder and haven’t been invited to one, prefer to change the subject. No one really wants to admit that they haven’t received an invitation.It’s not so bad for couples or single- parent families. They can still have a meal together at home with all the trimmings of the Seder table, but for widows, divorcees and other singles who have never married, Passover, Rosh Hashana and Succot can be the worst times of the year.A unmarried colleague commented that with the exception of haroset, which she loves, she hates Passover.She is a fairly popular person, which means that people who sometimes invite her for Shabbat don’t consider her for Passover because they are sure that someone else has invited her.The late Pnina Herzog, who was president of World Emunah and lived a five-minute walk away from the home of this writer, once called me on the eve of a holiday to make sure that I had been invited somewhere. The reason: There was a very eligible, personable, intelligent, handsome and affluent young bachelor living in her building.He had been a frequent guest in her home and when she met him on the stairs on the eve of the holiday and asked him where he was going to be that night, his answer was that he was staying at home. It transpired that no one had invited him because almost everyone who might have was certain that he already had an invitation from someone else. Herzog quickly remedied that situation, but then got to thinking about other single people that she knew and began making phone calls.Even when situations of this kind don’t arise, there is a kind of subconscious habit among hostesses to seat single women at the corner of the table, well away from any of the men, and to almost but not quite deny them the opportunity to participate in the conversation.Many career women today are really not interested in what used to be characterized as women’s subjects. Some prefer to discuss politics, philosophy, aspects of law and other subjects that traditionally were discussed by men and not by women.Single men tend to have fewer problems in this regard, because someone is always trying to marry them off, or is under the often false impression that men are unable to fend for themselves in the kitchen.They seem to do very well for themselves during the rest of the week, so it stands to reason that they would be able to spend Shabbat alone, as do many single women.Of course when there are several single women invited, only two can be put at the end of the table unless the hostess sits alongside her husband, which means that three can sit at the end of the table. But when there are more than three, for some reason, all the single women are lumped together, while single men are seated either next to the host, which is not quite the same as sitting next to the hostess, or are interspersed between two married couples.To relegate single women to the end of the table is humiliating and insulting, especially when there are also children at the table who are seated somewhere in the middle between the adults. It makes some women feel like charity cases.It’s fine when there’s a small table with room for only eight people. But when it’s a large table, with room for 20 or more, hosts and hostesses should show a little more sensitivity and place single women closer to the middle of the table where they can hear conversations going on at both sides and participate in the one that interests them the most.Sometimes the separate conversations at the table can be frustrating because of the noise level and the difficulty in following two or more conversations.Here again, tribute must be paid to the late Pnina Herzog. For want of a better word, she “controlled” her table and would permit only one conversation at a time so that everyone could join in. Because of her status she had an extraordinary number of friends who were leading figures in their respective fields and to sit at her table was always an educational experience.Perhaps because she was a widow herself, she was sensitive to the feelings of other widows, and always placed them in the middle and not at the end of the table.