Sequins, stars and songs in Jaffa

28 of this year’s Eurovision acts gave it their all for Israeli fans last week. 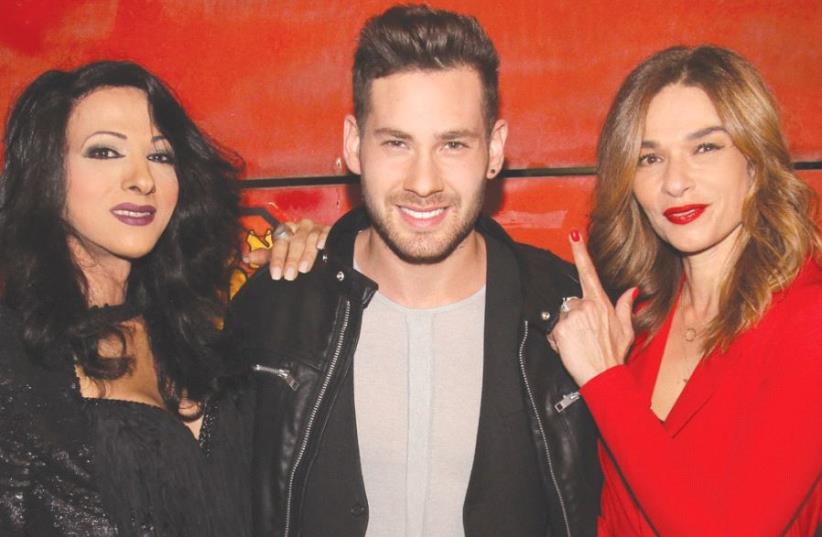 PAST ISRAELI Eurovision contestants Dana International (left) and Orna Datz (right) pose with current contender Imri Ziv
(photo credit: OR GHEFEN)
Advertisement
There were sequins as far as the eye could see.At a smoky club in Jaffa on a Wednesday night, things got more than a little European. That’s because mini-Eurovision had come to town: a delegation of 28 of the acts (including Israel’s Imri Ziv) in this year’s international singing competition came to Israel for four days last week for the second year of the “Israel Calling” initiative.In addition to touring the country and planting trees in a Keren Kayemeth LeIsrael- Jewish National Fund forest, the performers took the stage to offer a preview of what’s to come next month in Ukraine.There was glitz, there was glamour, there were technical difficulties, and there were a slew of gay men of all stripes packed into the club for the evening. There were so few women in attendance that there was never once a line for the ladies’ bathroom, only men wandering in to relieve themselves.None of that should come as a surprise to those familiar with the world of Eurovision – it’s a competition where ostentatious, campy and melodramatic are the name of the game. Which is why the crowd just about erupted with glee when Dana International – the transgender pop singer who took home the top prize for Israel in 1998 – took the stage. That was after three men in black bodysuits dotted with lightup balls danced to a two-minute electronica number.The energy kept up throughout the more than two-hour show – which began over an hour late – as the 28 performers from around Europe gave it their all. Israel Calling invited all 43 entrants in the program for the four-day trip, sponsored by the foreign and tourism ministries, the NGO StandWithUs and KKL-JNF; 27 countries took part.The first act to take the stage, the Moldovan band SunStroke Project, gave a peppy and fun performance of their song “Hey Mamma.” From there, things took a weird and winding road through soaring ballads, oddball protest songs and the most cliched lyrics known to mankind.Ireland’s Brendan Murray wants to “build a bridge to your heart every day,” Germany’s Levina wants you to know “sometimes it’s wrong before it’s right” and Denmark’s Anja Nissen can’t wait to “show you all the love I’ve held inside.” Romania’s Ilinca and Alex Florea offered an unexpected and jarring pairing of yodeling and rapping in “Yodel It!” Austria’s Nathan Trent offered a bright spot with stellar vocals in his upbeat “Running on Air.”The evening was somewhat marred by its woefully unprepared host, model and actress Galit Gutman, whose wooden delivery and stumbling English were cringe-worthy.And while he was obviously a crowd favorite, Israel’s Ziv offered a lackluster performance of his forgettable song “I Feel Alive.”Many of the acts seemed thrilled to be in Israel, and shouted out a dutiful “Shalom Tel Aviv” before beginning their acts. But nobody went quite as far as Montenegro’s Slavko Kalezi, who belted out some personalized lines from “Golden Boy,” the song Nadav Guedj performed for Israel at the Eurovision in 2015.If there were any takeaways from the exhilarating and eccentric evening, it’s that Ziv will face some stiff competition next month at the full contest in Ukraine.Israel, which has taken part in Eurovision since 1973, has won three times: in 1978 with “A-Ba-Ni-Bi” by Alphabeta, 1979’s “Hallelujah” by Gali Atari and 1998’s “Diva” by Dana International.