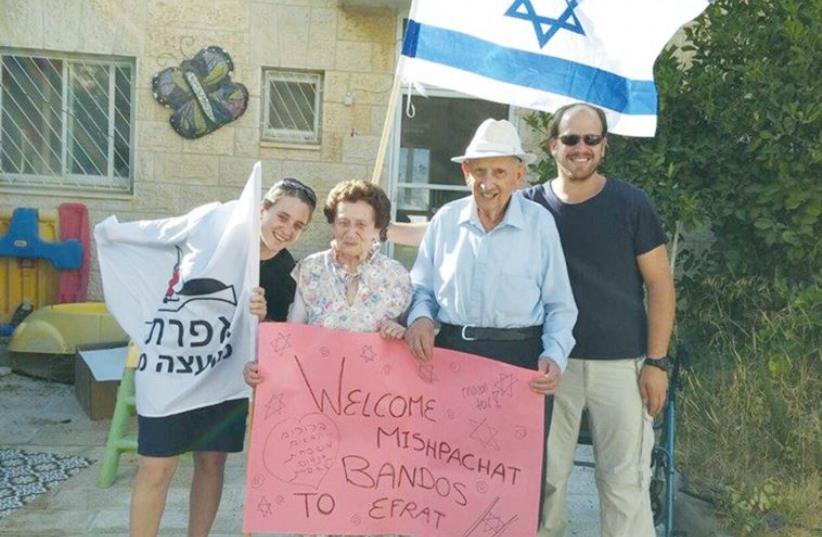 FEIGA AND FELIX BANDOS are welcomed by their family to Efrat last week.
(photo credit: EFRAT LOCAL COUNCIL)
Advertisement
Sixty-eight years ago, Felix and Feiga Bandos got married at the former Bergen-Belsen concentration camp, at the time a displaced persons camp in Allied-occupied Germany.Last Thursday, at the ages of 94 and 90, respectively, they have made a new home in Israel across the street from their daughter, Marilyn Broder, in the heavily English-speaking settlement of Efrat.Felix, a Polish survivor of the Lodz Ghetto who later made his way across Europe in a hegira that took him to Soviet Russia, Italy, Germany, Sweden and finally America, had always wanted to make aliya.Only 19 when he was incarcerated in the ghetto in 1940, he was still a young man when the war ended and he resolved to make his way to what was then Mandatory Palestine.“Right after the war, I tried to go to Israel and it didn’t work out. I had some problems to get there, it wasn’t legal,” he recalled, describing how the Allied occupation authorities expelled him from Italy, where he sought transport to the Middle East.“It didn’t work out too well,” he mused. “That’s why I ended up in Bergen-Belsen...I had no place to go right after the war.”It was there that he met Feiga, a young survivor from Lithuania.They courted and married, all within the confines of the former death camp.“I didn’t see any Germans until 1941,” she recalled, describing how she heard about the horrors of the war from afar before being plunged into it and being incarcerated in a ghetto herself.“We knew it wasn’t good, but we didn’t experience it. In 1941, the Germans started bombing everything.”Sent to a string of labor and concentration camps, Feiga was finally sent to Bergen- Belsen, where she was liberated by the British army in 1945.The couple moved to America in 1953.Asked if she had been as keen to make aliya as her husband, she replied that he had always expressed an enthusiasm for the idea, but that it was not as much in the forefront of her mind.“After more than 50 years in same house, you are not thinking [about that],” she said.Felix found work as a scrap metal dealer and settled into life with Feiga.He visited Israel frequently to see their daughter and grandchildren; Broder had made her own journey here in the mid-1980s.“I used to come here very often to visit grandchildren, my cousins, and my great-grandchildren. And I’m getting older,” he said.Noting that his health is not the best and that traveling is getting harder, he said he “decided to come to Israel and stay in Israel for the rest of my life.”Feiga agreed, saying she is very happy to be here.“So far it looks to be okay. We have family to help us and bring us around. Thank God my daughter helps us out.”Broder, however, takes no credit for their aliya.“I helped them with the actual stuff, like packing up the stuff. They did their own aliya visas. When I saw they did that, I knew they were serious. I saw that this was something they really wanted to do. I helped them implement it, and this is all their own doing. I always dreamed and wanted them to come, and I’m thrilled that this was their initiative."“It’s been a dream of mine for the past 35 years that’s been finally fulfilled,” she added.Efrat’s Mayor Oded Revivi was likewise eager to boast about his town’s newest additions, saying he is “proud of [immigrant] families, including the Bandos family, who strengthen our hold on the land and contribute to the growth of Efrat.” He added that in the coming months, 1,000 new housing units will be completed, some of which will be inhabited by new immigrants.