The Tisch: Going it alone

What did God mean by telling Abraham that he was to go “lecha”? 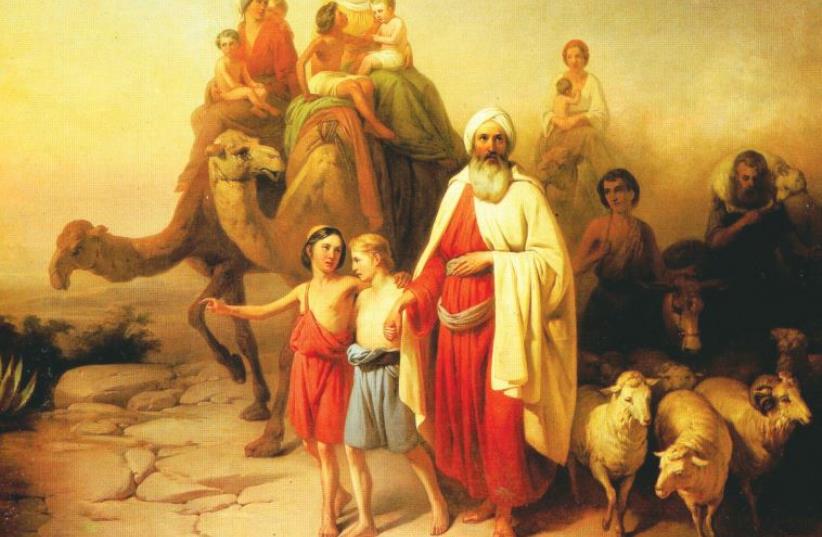 A painting of Abraham’s departure by the Hungarian artist József Molnár
(photo credit: Wikimedia Commons)
Advertisement
When God instructs Abraham to leave his birthplace and journey to the Promised Land, the Almighty tells him: “Lech lecha....” (Genesis 12:1). On one hand, the instruction is clear: Abraham was to leave (lech). On the other hand, the additional “lecha” – meaning “for you” – is cryptic. What did God mean by telling Abraham that he was to go “lecha”? How did this additional stipulation reflect or affect the journey? Commentators have offered different explanations for this additional word in the Bible. Perhaps the phrase should be understood to indicate that Abraham was instructed to go alone: “Lech lecha” – go on your own.Of course, this reading leads to a problem: If Abraham was instructed to go alone, why, then, did he travel with his wife, Sarah, and with his nephew Lot? Why did Abraham take his possessions and his household? This question may explain why hassidic masters read the instruction as a spiritual directive.Abraham was not told to physically leave everyone behind; rather, the command referred to his spiritual journey.God told Abraham to embark upon a spiritual quest on his own.Two famous hassidic masters adopted this approach – Rabbi Levi Yitzhak of Berditchev (1740-1809) and Rabbi Nahman of Breslov (1772-1810), though the two masters spoke in significantly different timbres. Both masters opined that spiritual quests are personal ventures that can be undertaken only by the individual. Despite the similarity in the approaches of the two masters, a closer look reveals that they have different perspectives on the relationship between the individual quest and the role of others.In the eyes of Nahman, the individual must embark on a spiritual journey unaccompanied, because others are likely to disturb. The Prophet Ezekiel declares that Abraham was singular (Ezekiel 33:24), which Nahman understood to mean that Abraham served the Almighty by himself. He did not look at or consider others who might disrupt his growth – not his parents, not his in-laws, not his partner, not his children. The true spiritual quest, perforce, must be undertaken alone.In a passage that may be difficult for many of us to read, Nahman gave parting instructions to his family before he set out for a pilgrimage to the Land of Israel in 1798. Without much warning and without discussing the matter with his wife, he decided to set out on the journey. This was the reaction of his family: “When his wife heard this, she sent her daughter to him to ask him how could he leave them. Who would support them? “And he responded thus: ‘You will travel to your relatives by marriage. Your older sister will get a job in someone’s home as a servant. Your little sister will be taken in by someone out of mercy. And your mother will get a job as a kitchen hand. And everything I have in my house – I will sell to cover the expenses of the journey.’” Such a seemingly callous attitude may be difficult for us to fathom. Indeed, many of us would identify with the response of Nahman’s family: “And when the people of his house heard this, they all wailed with crying. And they cried for a number of days.” Alas, the outburst of tears left Nahman unmoved; he was resolute to travel to the Holy Land.While I hardly recommend this spiritual path, it is consistent with how Nahman viewed Abraham’s quest. According to Nahman, other people – even those closest to us, such as beloved family – unsettle lofty objectives. Like Abraham, we are enjoined to embark on our spiritual quest… alone.Levi Yitzhak also understood that spiritual journeys are individual quests. But unlike his colleague, he did not mention the disturbances of those close to us. Rather, he focused on the personal nature of each human’s own mission.Each person needs to set out on a spiritual venture on their own, simply because only that person can realize his or her destiny. Only that person can achieve the goals and fulfill the potential set for him or her. No one else can do it for you.Even if you have the full support of your significant other, your dear parents, your beloved children, your closest friends; even if no one is disturbing or disrupting you; even if everyone close to you is trying earnestly to help you, Levi Yitzhak suggests that you must make the journey alone. All those around us, regardless of their good intentions and sincere efforts, are helpless. Spiritual growth is, by definition, an individual – and therefore lonely – quest.These two paths for spiritual growth look at those around us with very different eyes: Nahman sees them as hindrances and impediments; Levi Yitzhak sees them as unable to assist. Both masters agree that when it comes to spiritual quests, we are all essentially on our own; it is a quest we must undertake alone.
The writer is on the faculty of Pardes Institute of Jewish Studies and is a rabbi in Tzur Hadassah. He is a postdoctoral fellow with the Inter-University Academic Partnership in Russian and Eastern European Studies.
Advertisement
Subscribe for our daily newsletter