These comedians want to bring Yiddish humor to TV

The TV show would also introduce a cast of characters from other religious and cultural backgrounds who grapple with similar questions of identity. 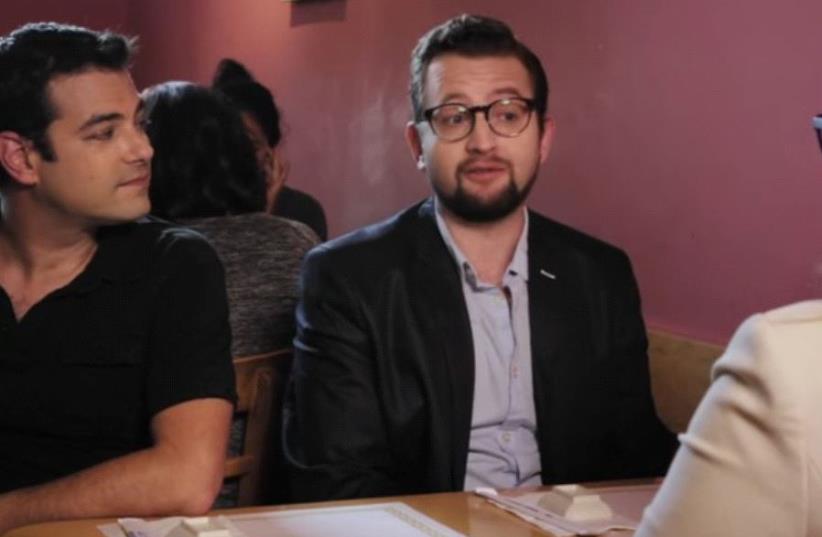 Jamie Elman, left, and Eli Batalion created and star in the web series “YidLife Crisis”
(photo credit: YOUTUBE SCREENSHOT)
Advertisement
It’s safe to say that Eli Batalion and Jamie Elman are some of the funniest Yiddish speakers around. Their Yiddish-English web series, “YidLife Crisis,” is a modern-day, Montreal-based “Seinfeld” that would make any Jewish mother kvell (“It’s in Yiddish!”) and kvetch (“The sex, drugs and Jesus jokes! Oy!”).The series, which premiered in 2014, follows the nebbish Leizer (played by Batalion) and rebel wannabe Chaimie (Elman) as they wander around Montreal, eat at restaurants and have Talmudic debates about their Jewish identities.In one episode, Chaimie tries to convince Leizer to order food in a restaurant on Yom Kippur. Leizer reluctantly agrees — but insists the waitress separate the meat and dairy-based foods. In another, which takes place at a kosher sushi restaurant, the two men fight, in Yiddish, over the affection of a woman (played by “Big Bang Theory” actress Mayim Bialik), not realizing that she can understand everything they are saying. Now Batalion, 36, and Elman, 40, hope to bring their brand of Yiddish humor to a larger audience. The duo is in talks with a Canadian broadcaster to create a TV show based on the web series. In addition, “YidLife Crisis” received an entrepreneurship grant earlier this month from the Jewish philanthropy Natan Fund to further expand its content.The challenge facing Batalion and Elman is how to broaden the appeal of “YidLife Crisis” beyond the Jewish community without abandoning its Yiddish roots.Though the pair say they hope to remain in the main roles, the TV show would also introduce a cast of characters from other religious and cultural backgrounds who grapple with similar questions of identity.The series “would take a lot of the content from ‘YidLife Crisis’ — the chemistry and ideas behind it — but go further down the road of multicultural Montreal, putting a few other multicultural characters on display as well,” Batalion said, speaking with JTA on a conference call with Elman.They’re not particularly concerned that a departure from the show’s tight Jewish focus will alienate the show’s most devoted fans. Batalion, who has produced, composed and written content for “horror musical” films, assured JTA that a potential TV series “would still be extraordinarily Jewy.”While the characters would speak more English on TV than in the web series, Yiddish would feature as “a code language” in which Batalion and Elman’s characters interact with older family members.“We love ‘Transparent’ as a show that at its surface is not about Judaism, but in practice it’s filled with loads of Jewish content. And we think this would be the same,” said Elman, whose acting credits include “Mad Men” and “Curb Your Enthusiasm,” drawing a parallel to Amazon’s acclaimed series following a Jewish family as the father comes out as transgender.Working on scripts for the TV series keeps Elman and Batalion plenty busy — that means they’ve had to put the third season of the web series on hold.“The goal from early on was to see if we can take this to long-form, so now that we’re given that opportunity to try, we’re putting all our eggs in that basket,” Batalion said.They noted, however, that they are still making Yiddish-language videos — including clips of Hollywood classics and holiday songs hilariously dubbed into Yiddish — to satisfy fans hungry for content. In creating “YidLife Crisis,” Batalion and Elman said they wanted to challenge perceptions both of Yiddish and Judaism.“We wanted to show a different side of Judaism and a different side of Yiddish, and that Yiddish is not just a language for ultra-Orthodox Jews,” Elman said.Batalion and Elman, who both learned Yiddish as teenagers at the secular Bialik High School in Quebec, said a goal was to showcase the language and its cultural heritage.“We also felt that the Yiddish was critical to drawing attention to what we were trying to say, or to some of the themes we were speaking to — themes of culture and how to preserve it,” Elman said. “Yiddish is something that was nearly lost in the Holocaust.”The pair didn’t become friends until 2007, when Batalion was on tour with his two man show, “J.O.B. The Hip-Hopera,” which follows the biblical character Job as he is transported to modern-day New York. Batalion performed with his co-producer, Jerome Sable, in Los Angeles, where Elman was working as an actor. Wowed by the performance, Elman befriended the pair and went on to produce a web series with Sable.Batalion and Elman later found a way to meld their friendship and professional goals, creating “YidLife Crisis.” Though the two live on opposite coasts — Batalion lives in Montreal, Elman is still based in Los Angeles — they film the episodes in Montreal. They have also filmed special episodes in Tel Aviv and London.When asked to describe their relationship, they draw on the two defining characteristics of the show: Judaism and humor.“Talmudic,” Batalion said of the duo’s connection.Elman, on the other hand, quipped that it’s “not entirely kosher.”Jokes aside, that juxtaposition speaks to a central theme in “YidLife crisis”: the tension between the pull of the Jewish tradition and the appeal of secularism. That conflict is also present in the Yiddish language, Batalion said, noting that the language is in fact largely made up of German, a non-Jewish source.“The language itself is highly honed,” he said. “It speaks to and sounds like a thousand years of Diasporatic experience living in another culture. And that’s what you get in our episodes — it’s all about Jews living in a secular world.”