Best things to do in the week to come. 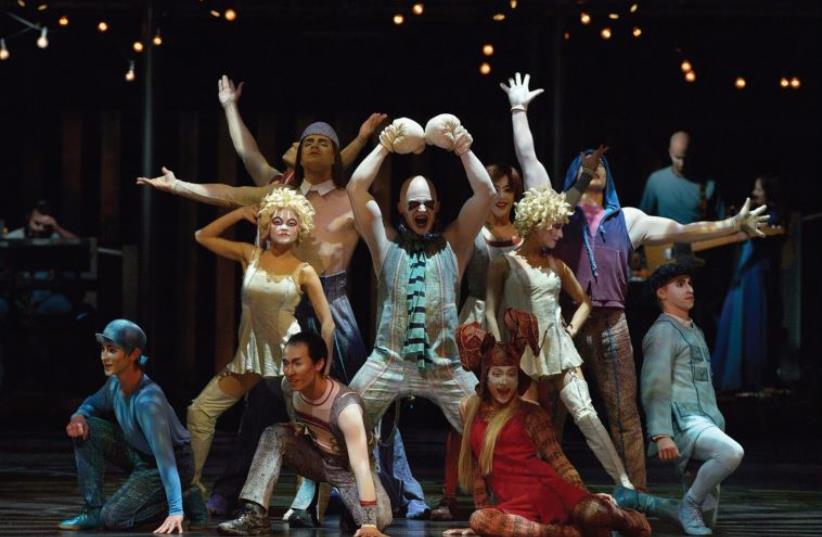 Cirque du Soleil
(photo credit: PR)
Advertisement
1 FILMS
AUSTRALIAN CINEMA
The 11th annual Australian Film Festival opens with the new film Strangerland, starring Nicole Kidman and Hugo Weaving.It tells the story of a couple searching for their two teenage children who have disappeared. Five other feature films will be screened at the cinematheques in Jerusalem, Tel Aviv, Haifa and Sderot.The festival ends July 9. For more information and screening times, call Niva at 052-329-2226; Jerusalem *9377; Tel Aviv (03) 606-0819; Haifa (04) 833-8888; Sderot (08) 689-7741.2 THEATER
MUSICAL ACROBATICS
The magical acrobatics of Cirque du Soleil, the Canadian theatrical group, will come to Israel with the spectacular award-winning production Quidam.This unique production, seen by more than 10 million people worldwide, examines “normal” people – ones with dreams, worries and desires – with a cast of 52 acrobats, actors, musicians and singers. An incredible musical and visual experience.Thursday (July 2) through July 16 at 8:30 p.m. at the Menora Mivtachim Arena (Yad Eliyahu) in Tel Aviv. For tickets, call *9066; www.eventim.co.il.3 DANCE
DANCING AROUND THE WORLD
The Suzanne Dellal Center opens the summer with the Tel Aviv Dance 2015 events that feature both local and international performances. The events showcase international and Israeli dancers from Spain, New York, Paris and Istanbul.There will also be a side event, Squared 80, which hosts intimate evenings with choreographers, actors and musicians.Wednesday (July 1) through September 5 at the Suzanne Dellal Center in Tel Aviv. For more information and tickets, call (03) 510- 5656; www.suzannedellal.org.il.4 MUSIC
LEVY AND POETRY
The Confederation House presents Shem- Tov Levy in concert, performing songs composed to texts written by Jewish poets of the past and present such as Leah Goldberg, Bialik, Alterman, Dalia Rabikovich, Yehuda Halevy, Moshe Ibn Ezra and Cavaffy, as well as new melodies for the poems of Moshe Haim Luzzatto.Thursday at 8:30 p.m. at the Confederation House in Jerusalem. For tickets, call Bimot *6226; (02) 623-7000; (02) 624-5206 Ext. 4.5 ART
VISUALS OF HEAVY METAL
The Raw Art Gallery will display an exhibition by Adi Nachshon. The artist uses an esthetic language taken from heavy metal, glam metal and power metal imagery.The visual aspect of their performances is composed of satanic, prehistoric and medieval dark worlds. Nachshon chose for the exhibition archeological findings of prehistoric creatures as the basis for structural alterations of the original form.Opens Thursday (June 25) at 8 p.m. at the Raw Art Gallery, 3 Shvil Hameretz St., Building 8, Tel Aviv. For more information, call (03) 683-2559.6 AN OBSESSIVE PORTRAITIST
Moldavian artist Leonid Balaklav explores and paints himself and others time and again, somewhat obsessively. He finds something different in the same model – the light, the background or a sitter who has aged. This exhibition is comprised of self-portraits, portraits of his family and portraits of others.Thursday (July 25) at the Tel Aviv Museum of Art, the Charles and Evelyn Kramer Galleries Main Building. For more information, call (03) 607-7020.7 MIXED BAG
ART BY THE PORT
Indie Art hosts a unique multidisciplinary art experience. The event, which will run for two hours straight, will include 18 displays and performances by prominent artists in the fields of music, dance, theater, video art, animation and photography. The performances will take place in a panoramic manner, with no separation between artist and audience.Wednesday at 9 p.m. at 36 Port St., Haifa.For more information, call Anat 052-374-1127.8 GOLD FROM THE SEA
In February 2015, the Antiquities Authority conducted a salvage excavation off the coast of Caesarea and recovered more than 2,580 coins of pure (24 karat) gold weighing a total of 7.5 kg. The coins were minted by the Fatimid caliphs of Egypt, who ruled over a vast empire stretching west to Syria and Yemen in the east. They are now on display in Jerusalem.Exhibition opens Tuesday at the Israel Museum in Jerusalem. For more information, call (02) 670-8935.9 RAISING AWARENESS
The Association of Rape Crisis Centers in Israel is holding a fund-raising event that features volunteers, poet Yehonatan Geffen and musician Shlomi Shaban, emceed by Galit Giat. The event is designed to raise social awareness about the painful subject of sexual violence and to raise funds for the continued activity of the Jerusalem-based organization.Saturday at 9 p.m. at the Jerusalem Theater. For tickets, call 052-676-7444; jrcc@ netvision.net.il.10 UPCOMING MUSIC
THE EAGLES ARE COMING
California band Eagles of Death Metal will perform at Barby, with local group Cain and Abel 90210 as opener. The music of the former is as far from the metal genre as their members are far from seriousness. Prior to the release of its fourth album, the band is on a European tour, keeping true to its rebellious, aggressive and cheeky attitude.July 12 (Sunday) at 8:30 p.m. at Barby in Tel Aviv.For tickets: www.barby.co.il.
Advertisement
Subscribe for our daily newsletter