Tourism returns to the Cote D’Azur

As Nice continues to reel from the consequences of the tragic terror attack it suffered last years, tourists slowly go back to flocking Cote D'Azur scenic capital. 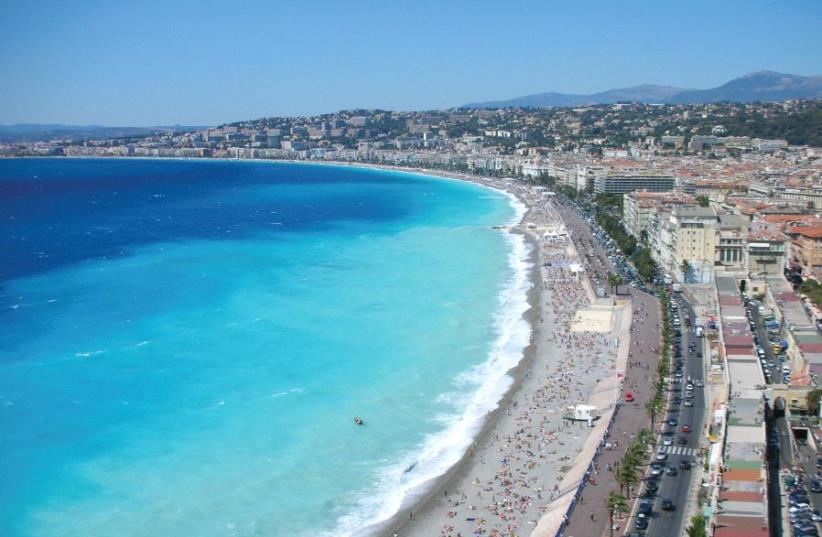 THE NICE seafront on a windy day.
(photo credit: Wikimedia Commons)
Advertisement
They’re coming back: tourists to Nice, the capital of the famed and beautiful Cote d’Azur.Seven months after a truck attack on Nice’s seaside promenade during last year’s Bastille Day left 86 people dead, the southern French city last month welcomed 250,000 ticket holders among the estimated 600,000 who crowded the city for the famous Nice carnival.Tourism dropped sharply in the months following the terrorist attack, but rose again toward the end of the year, according to the local tourist office.True, it was the first time that the carnival parade moved down a route other than the traditional Promenade des Anglais.The parade took place on one of the new markers of the city, the Promenade du Pailion, more than 12 acres of park running from the city center to the sea.Still, more than 1,000 singers and dancers from around the world took part in the carnival known for its floats and “battle of the flowers” – when tons of fresh flowers are thrown into the crowds.Tourists are returning to Nice because this municipality and the area are among the most beautiful vacation lands in the world.Whenever I travel to Nice, the capital of the Riviera and of international tourism, I enjoy partaking of its festivals and jazz concerts, old districts, casinos, markets and fine hotels.And yes, my first stop whenever I am in that famed city of Nice is the Promenade des Anglais, which curves around the beckoning, blue Mediterranean. The promenade extends from the airport on the west to the Quai des États-Unis on the east, a distance of approximately seven kilometers, a nice hike. But whether you stroll all or just part of it, you will appreciate this grand boulevard by the azure sea.As for people-watching, the promenade remains one of the best spots for it in the world. On Sundays, you will espy bicyclists, baby strollers and whole families out for a stroll. I would agree with those travelers who say and write that this pathway moves alongside the loveliest urban seafront in Europe.Whenever I stroll along the Promenade des Anglais, I am reminded of a number of those English and Russian novels I read where the aristocracy from northern Europe arrived in Nice to spend part or all of the winter in Nice. In 1820, the English began arriving here. As the story goes, a particularly harsh winter up north brought an influx of beggars to Nice, so some of the English proposed a useful project for them: The construction of a walkway along the sea. The city of Nice increased the scope of the work. After the annexation of Nice by France in 1860, the road was renamed La Promenade des Anglais, which today of course is lined with grand hotels, including the magnificent Negresco with its huge Baccaat chandelier.Even in December, the temperatures can rise above 14º centigrade. Yet, it’s in summer that Nice flaunts its tourism.Sauntering along the promenade should not be your only preoccupation when spending time in Nice. For instance I like to amble through the old town. This is where you find the real Nicois, and oh yes, again, one of the finest flower markets in the country in the outdoor market in Cours Salyea. In old Nice, I like to revisit bistros and galleries, and, ah those little French shops.Then there is the Musee d’Art etd’Histoire, 65 rue de France, and the Musee des Beaux Arts, at 33 av. des Baumettes, which has works by Monet, Degas and Sisley.Whenever I am in Nice I take a ride up to the suburb of Cimiez often described as a “cradle of hills” to the north of the city.Nice likes to say that it remains one of the homes of the Jewish artist Marc Chagall, in the form of The National Museum Biblical Message of Marc Chagall, located at avenue Docteur Menard and boulevard Cimiez.The museum contains the most important permanent collection ever assembled that is devoted to Chagall – including large paintings, preparatory sketches, gouaches and engravings.Chagall once said, “Perhaps in this abode, one will come and seek an ideal of fraternity and love such as my colors and my lines have dreamt.” He commented on his famous Bible paintings hanging in the museum: “I want to leave them in this house so that people may find here a certain peace, a certain spirituality, a religious atmosphere, a feeling for life.” Other media include stained-glass mosaics, lithographs, sculptures and tapestries.Further up the hill is the Musee Matisse at 164 avenue des Arenes de Cimiez. On view are pieces from Matisse’s personal selection. For those heading to Nice this summer, the museum has announced that the Matisse Museum will propose a thematic re-hanging of its collection, particularly highlighting the link between Matisse and Nice.About 20,000 Jews support a dozen synagogues, about 20 kosher butcher shops, several Talmud Torahs, a yeshiva, and a headquarters for the Lubavitch movement, including a youth hostel.Jewish tourists who seek information regarding synagogues and kosher food in Nice and the area should contact the office of the Grand Rabbi, 1, rue Voltaire. Tel: 93-85-82-0 Synagogues include: • Grand Synagogue, 7, rue Gustave-Deloye • Synagogue, 8, rue Marceau • Union Libérale Israelite de France, 24, rue de France, • Synagogue Massorti of Nice, 17 avenue Shakespeare • Beth Lubavitch-Chabad, 22, rue Rossini, sponsored by the Lubavitch movement.• Chabad Center, 73 Boulevard Edouard Herriot Kosher food: The following two establishments are for dairy diners: • Lechem Chamayim – 22 rue Rossini • Le Keter – 41 av Georges Clemenceau The following are meat restaurants: • Kineret – 37 bis av Georges Clemenceau • Meat Bar – 13 rue Andrioli • Le Dauphin Bleu – 24 rue Meyerbeer • Amouyal – 1 bd joseph Garnier • Cach’ Crout – 4 Bd Gambetta And yes, after your trip to Nice, you can still drive to nearby Monte Carlo, Cap Ferat, Antibes, Juan-les-Pins and St. Tropez, where you will discover even more beaches, villages, sun terraces on high-rise apartments, promenades, modern art museum, fireworks, flowers and carnivals. The Riviera awaits you – don’t miss it.