The shofar could be thought of as a warning, but it is also associated with celebrations. 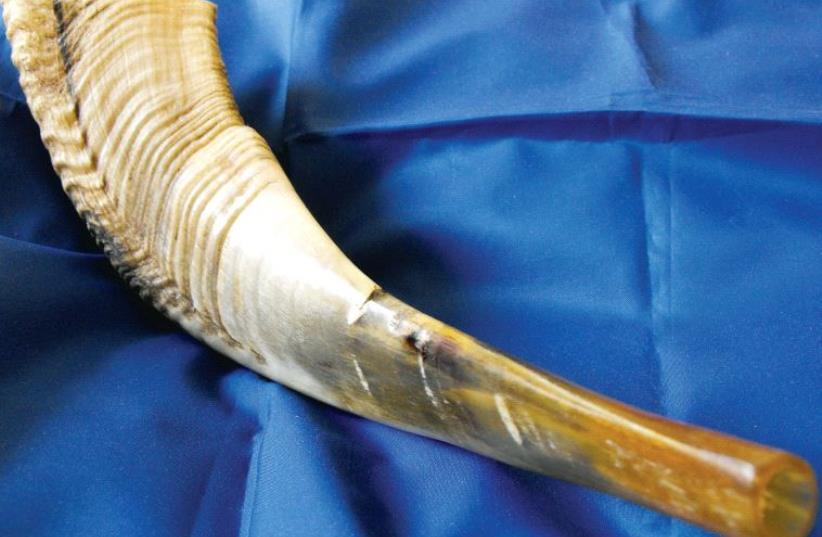 A shofar
(photo credit: WIKIMEDIA)
Advertisement
Every year when Rosh Hashana comes around, I am torn between two feelings.Should I be happy or should I be afraid? I’m never quite certain.When you look at the way the holiday is described in the Torah, all it says is that it’s a time for sounding the shofar – “...a sacred occasion commemorated with loud blasts” (Leviticus 23:24).The shofar could be thought of as a warning, but it is also associated with celebrations.For example: “praise Him with blasts of the horn” (Psalms 150:3); “For on that day a great shofar will be sounded: those lost in the land of Assyria and those cast away in the land of Egypt shall come back and worship the Lord on the holy mountain in Jerusalem” (Isaiah 27:13).There is a long-standing custom of eating sweet things – such as honey – and saying “May we have a good and sweet year!” All the various tribes of Israel have foods traditionally eaten which are symbols of goodness, fertility and sweetness. Furthermore, the rabbis taught that all the verses we recite in the sections of Malchuyot, Zichronot and Shofarot in our Rosh Hashana prayers must be positive ones indicating good things that happened in the past and will happen in the future. So we have every reason to rejoice.And yet the most wellknown piyut (liturgical poem) of Rosh Hashana is “Unetaneh Tokef,” which is one of the most frightening poems I know. It depicts the Day of Judgment – not some day in the far-off future as Christianity has it in the text of the Requiem Mass where it is called “a day of wrath,” but these very days of Rosh Hashana and Yom Kippur! “Who shall live and who shall die... who by fire and who by water, who by sword and who by beast....”There are other similar piyutim as well, such as the one in which we describe God as “the God who conducts judgment on this Day of Judgment.”All of these are based on the fact that the Mishna cites the first of Tishrei as one of the four times when the world is judged. In Tishrei it is humanity that is under scrutiny.Not just Jews – humanity.“On Rosh Hashana all human beings pass before Him as troops... He discerns all their doings” (Rosh Hashana 1:2).That is a frightening thought when we look around at the world in which we live and consider the utter brutality of fanatic groups that match any horrors we have seen before. The cruelty seen in the attacks by the Syrian government on its own people is sickening. So is the violence inflicted by terrorists in Israel, as are the revenge attacks perpetrated by Jews. They may be fewer in number, but even one is too much, since it degrades our people and stains our great moral tradition.We know that our world and even our own society are filled with actions we deplore, so we cannot avoid negative feelings and fear of the future. It is only natural that we should experience feelings of fear and anxiety at such a time. The world we live in is a dangerous world, and nothing can ever be taken for granted.Yet without hope and confidence in the beauty and worthwhileness of life, it would be difficult to go on. One cannot exist without hope and a belief that things can change for the better.No wonder Rosh Hashana is such a mixture of contradictory feelings.Our knowledge of the existence of problems can serve as a goad to work to improve whatever is wrong in the world, in our own society and in our own personal lives. Obviously, each of us has a limited ability to change things for the better, but whatever we do is important. That is what the Sages had in mind when they said that we are “partners with the Holy One in the work of Creation.”The psalm we recite during this High Holy Day period, Psalm 27, is a perfect expression of this mixture of fear and happiness, dread and hope, that we experience now and throughout our lives.The Psalmist begins by expressing the feeling that he has nothing to fear – “...whom shall I fear?” (Ps. 27:1), but then he reveals that indeed he does have enemies who seek to do him harm (Ps. 27:2-3, 11-12), and he does feel abandoned even by God (Ps. 27:9), but in the end he overcomes his despair and regains his hope that he will yet experience “the goodness of the Lord in the land of the living” (Ps.27:13) and ends by urging himself to continue to “hope in the Lord, be strong and strengthen yourself and hope in the Lord” (Ps. 27:14).Those words should give us the strength to go on, to face the world with hope, regardless of the dangers and fears that are part of human existence.L’shana tova tikatevu – may we all be inscribed in the book of life for a good year! ■ The writer is a past president of the International Rabbinical Assembly, a Jerusalem lecturer and author, whose book Entering the High Holy Days (JPS) received the National Book Award. His latest book is Akiva: Life, Legend, Legacy (JPS).