The claims against Tambor, which are the subject of an internal probe launched by Amazon, are the latest in a string of complaints made against celebrities. 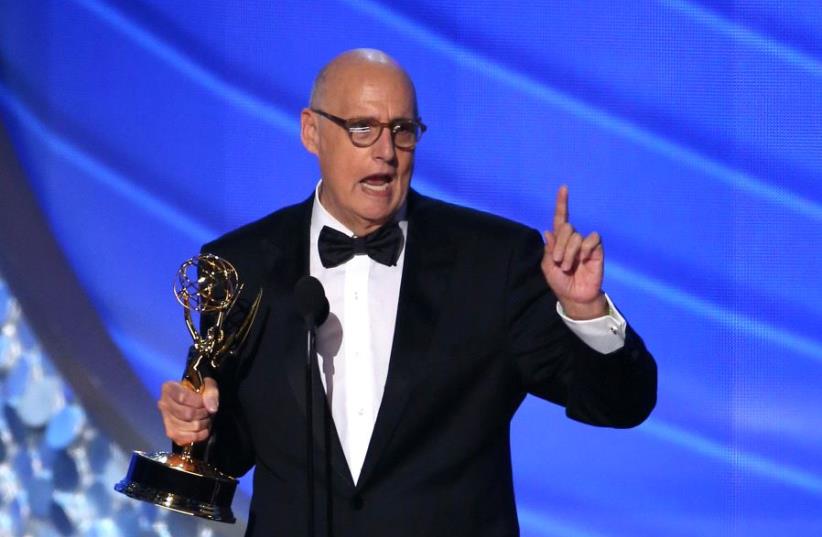 Jeffrey Tambor accepts the award for Outstanding Lead Actor In A Comedy Series for 'Transparent'
(photo credit: REUTERS/MIKE BLAKE)
Advertisement
Jeffrey Tambor, the star of the Emmy-winning television comedy “Transparent,” denied sexual harassment allegations made by a female member of the show’s cast a week after denying similar charges by his former assistant.Tambor issued the denial in a statement Friday in response to claims made earlier in the week by Trace Lysette, who has played the recurring character Shea on the Amazon series since its first season, MNE reported.Lysette wrote on Twitter that Tambor had made “sexual advances and comments” toward her and “one time it got physical.”Tambor, who is Jewish, plays the transgender head of dysfunctional Jewish family in the series.He said in his statement: “I know I haven’t always been the easiest person to work with. I can be volatile and ill-tempered, and too often I express my opinions harshly and without tact. But I have never been a predator – ever.”The claims against Tambor, which are the subject of an internal probe launched by Amazon, are the latest in a string of complaints made against celebrities in the wake of a New York Times article last month about the alleged harassment by Hollywood mogul Harvey Weinstein, who was fired from the company he founded over the allegations.Tambor’s former assistant, Van Barnes, a transgender woman, made the allegations in a private Facebook post on Nov. 8 that was not widely circulated in the media. Tambor dismissed them as “baseless” charges coming from a “disgruntled former assistant.”Lysette said Tambor sexualized her in front of co-star Alexandra Billings during a break on set. The actress said she laughed off the comments because “it was so absurd” and she thought “surely it had to be a joke.” But she claimed the harassment turned physical later that day.“In between takes, I stood in a corner on the set as the crew reset for a wide shot. My back was against the wall in a corner as Jeffrey approached me,” Lysette tweeted. “He came in close, put his bare feet on top of mine so I could not move, leaned his body against me, and began quick, discreet thrusts back and forth against my body. I felt his penis on my hip through his thin pajamas and I pushed him off of me.”Amazon launched an investigation into the sexual harassment claims made by Barnes earlier this month, and the company said it is aware of Lysette’s accusation and is now looking into it as well.According to Deadline, the writers of “Transparent” are contemplating writing Tambor out of the fifth season of the show.