Uproar ensued after the 'Quantico' star posted two self-taken photographs at the grounds of the solemn monument in the German capital. 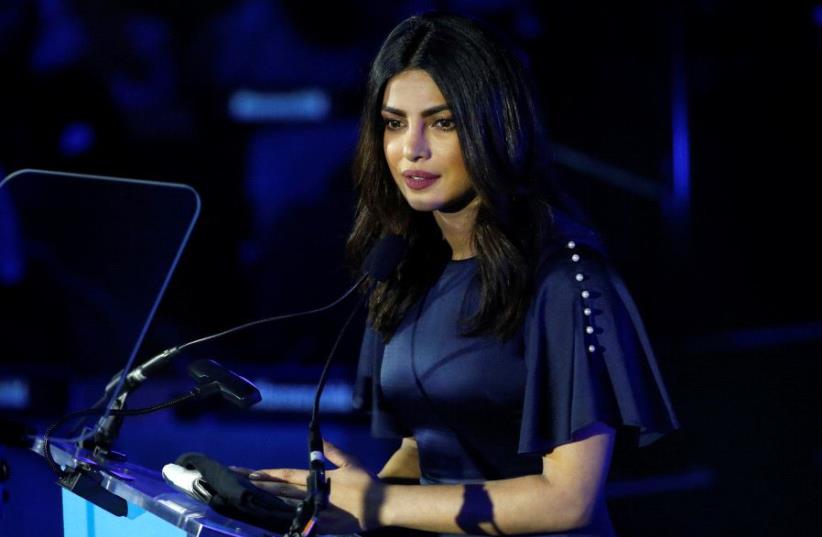 Priyanka Chopra
(photo credit: REUTERS)
Advertisement
Rising Hollywood star Priyanka Chopra faced online backlash after posting selfies at Berlin's Holocaust memorial to social media earlier this week. Uproar ensued after the Quantico star posted two self-taken photographs to her Instagram story at the grounds of the German capital's solemn Memorial to the Murdered Jews of Europe.The iconic monument dedicated to the six million Jews murdered by the Nazi regime during the Holocaust features 2,711 concrete slabs that are thought to resemble gravestones. In one of the selfies uploaded by Chopra, 34, she was seen in the foreground of the gray stone slabs alongside the caption "Holocaust Memorial #Berlin." The other image showed Chopra and her brother with the rows of block structures in the background with an caption reading: "@siddarthchopra89 and I being tourists. There is such an eerie silence here."The Bollywood darling turned Hollywood actress immediately came under fire by social media users, who criticized her with accusations of insensitivity.

Is it respectable for @priyankachopra to be taking selfies at the #Holocaust Memorial? pic.twitter.com/BKPpJOAsE7

Why is it okay for @priyankachopra to take selfies at the #Berlin #holocaust #memorial? She isn't striking yoga poses & all that but really?

In light of the online firestorm, Chopra reportedly deleted the photographs from her online social media account.The incident occurred while the top Indian actress, who broke into the American entertainment scene in recent years, was visiting Germany to promote the release of her new movie 'Baywatch.'The controversy over the Holocaust memorial erupted the day after the 'Twittersphere' slammed Chopra for the length of the dress she wore while meeting Indian Prime Minister Narendra Modi on Tuesday in Germany.

Was such a lovely coincidence to be in #berlin at the same time as the Prime Minister. Thank you @narendramodi Sir for taking the time from your packed schedule to meet me this morning.

One of these pictures is very offensive but outrage is directed at the other. pic.twitter.com/UoQ1kxWaaM