The author takes on the lack of cleanliness in one of Haifa's municipal buildings. 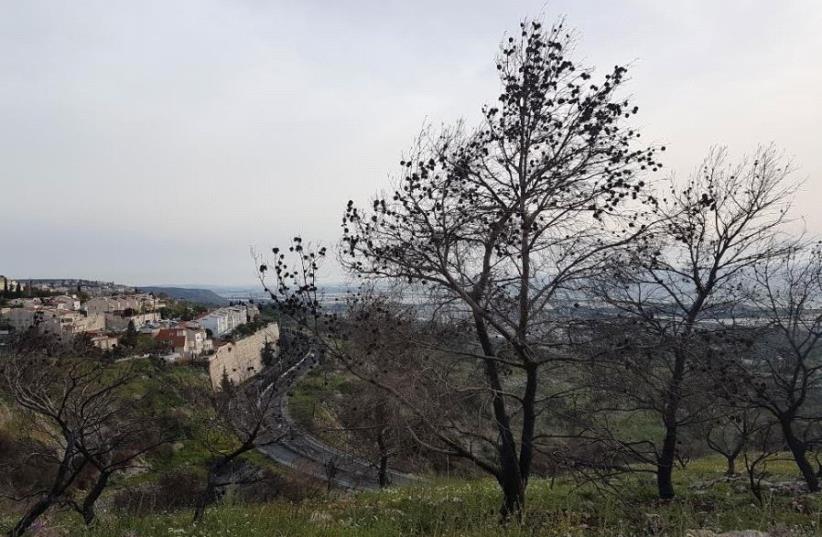 The road and sea seen from the hills of Haifa, Israel
(photo credit: BECKY BROTHMAN)
Advertisement
When I was a child, my mother took me to the municipal library in the Town Hall of our London suburb. We walked through gleaming parquet-floored corridors to the library and up to the enormous desk where the librarian looked down from her great height and said, “Hello – here again?” In a major Israeli city like Haifa with a population of 300,000, one would expect a building of some grandeur and ambiance instead of the small, scruffy edifice on the Hadar, its ugliness emphasized by the fact that it is adjacent to the beautifully designed renovated municipal theater.The simplicity of the building could be tolerated, however, if attention were paid to cleanliness and safety. The shelves are floor-to-ceiling; as one walks around with a reading list, one might have to totter on a ladder or crawl on the floor to find required books.The entrance hall and staircase have dusty, torn and cracked linoleum floors, and as for the toilets, I have a file of letters going back several years complaining about the lack of hygiene and danger to public health.My letters are always addressed directly to the mayor; he claims that his door is always open to residents of Haifa. Nevertheless, the replies always come from the office of public affairs. The latest is from a Yossi Cohen, whose list of excuses is even more bizarre than those previously received.Apart from the decaying state of the entrance and staircase, my focus has been on the appalling state of the bathrooms adjacent to the library. The toilets themselves are without seats, usually with evidence of previous users and without any means to wipe them clean. There is a constant stench of urine and the walls and doors show no signs of ever being cleaned thoroughly. A leaking tap dripping into a dirty basin, no toilet paper, soap or hand dryers make it impossible for users to wash their hands before going into the library and handling the books.Over the years, the replies to my letters have stated the municipality’s intention to renovate the toilets (meanwhile, presumably, they don’t need cleaning or washing equipment).The responses have blamed Haifa citizens for stealing toilet paper or breaking soap dispensers and towel holders. In my repeated complaints I have suggested that the toilets should be locked and the key kept at the librarian’s desk; when a user has to return a key there is a feeling of responsibility for leaving the place clean.I also noted that the offices of the municipality’s moneymaking departments, such as the arnona (municipal taxes), water and parking authorities are bright with polished tiled floors and spotless toilets, even though the number of citizens using them is far higher than that in the library.In this latest letter, Cohen claims that the toilets are cleaned every day at 8 a.m. and 4 p.m. The quality of the cleaning is not discussed. Cohen repeats the assertion that equipment gets stolen or broken and makes no reference to my suggestion of allowing access only with a key from the librarian.The most bizarre addition in this latest letter is that the library is adjacent to Gan Binyamin, a public park, and therefore the toilets are convenient for all who use the park.First, the park is on a steep slope with terraces of steps leading up to the theater and library. If a parent is trying to prevent a child playing on the swings from wetting her knickers, they are unlikely to succeed if they have to get the child, stroller, bags and maybe other children in tow, up that slope and up the many stairs before reaching the library building.Second, there are public toilets at the corner of Nordau Street on the edge of the park, far nearer to the children’s playground, although I haven’t had the courage to inspect their state of cleanliness.On the subject of the dirty and scruffy entrance and staircase, he promises that by the end of the year they will be renovated. He just doesn’t write what year!