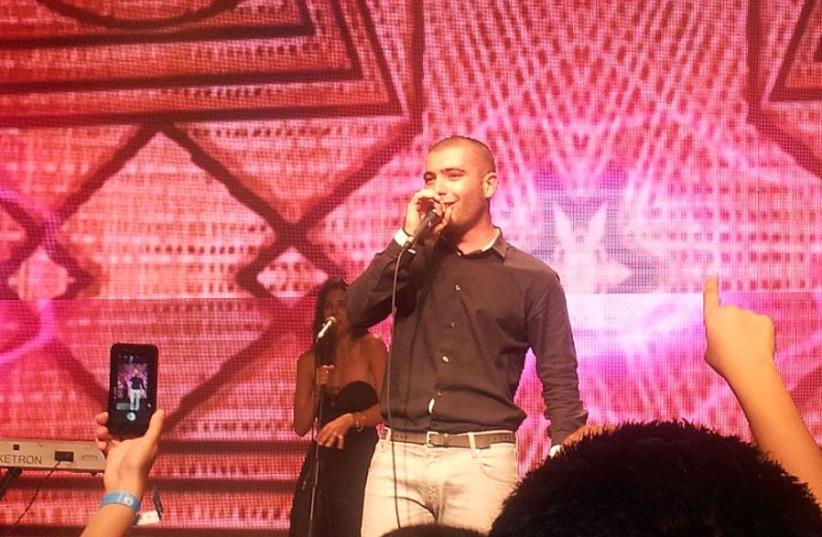 Omer Adam in concert
(photo credit: ASHER1984/WIKIMEDIA)
Advertisement
Popular Israeli singer Omer Adam has been forced to cancel his sold-out concert tour in the United States after encountering visa problems for some of the crew.According to Noy Shows, the production company responsible for the tour, the shows will be rescheduled.“Due to changes in policy and scrutiny by the USCIS [United States Citizenship and Immigration Services], the visa petitions for Mr. Adam’s band are currently being held off,” the company wrote in a statement. “We filed all that is required by law, and much more, in more than a timely manner and used the best attorneys. We are doing our best and using the best legal teams to achieve all the required permits for the new dates.”Noy Shows did not say when those dates might be, but promised to update disappointed fans “as soon as possible.”Shayna Weiss, an Adam fan living in Washington, had been planning to travel to New York to see his show. More than 14 hours after organizers announced the cancellation via Facebook, she said she hadn’t been notified in any way.“I bought tickets in November,” she said. “And I live in DC! And I made a long weekend about it. And tickets were not cheap.”Weiss said she was upset about the cancellation, and the fact that nobody had contacted her: “I’m mad. Why would I check [the concert organizers’ Facebook page]?”Other commentators on Facebook were also angry about the late notice.“How do they get to the point where they cancel the show less than a week in advance?” asked Lee Spungin. “And they published this only after reports in other media outlets.”Adam, who has quickly become one of the hottest artists in Israel, was scheduled to perform on Sunday in New York, Tuesday in Miami and Wednesday in Los Angeles. Concert organizers had said the shows were all sold out by early February.Adam is not the first Israeli artist to face visa troubles. In 2015, Eyal Golan was forced to cancel US shows for the same reason, and the band Ethnix suffered the same fate the same year. Earlier this year, Amir Benayoun’s appearance at the UN was in jeopardy over visa troubles – that he said were political – before one was granted at the last minute. Benayoun accused the US Consulate of denying his original application due to his criticism of president Barack Obama when he was in office.Tsvi Kan-Tor, an attorney who specializes in immigration issues, said many Israeli artists fall into predictable pitfalls.“There are artists who think that receiving a visa won’t be any problem,” said Kan-Tor. “But they need to make sure to apply for a work visa – even if it’s just a few days, even for one show, they’re going there to work. Also, it takes a few weeks up to a few months and they may submit their papers too late. And the third thing is that if they have any criminal past in Israel – even drug use or a DUI – they won’t get a work visa.”That last reason was reportedly the problem for Golan, who has had multiple brushes with the law including tax evasion. Kan-Tor told The Jerusalem Post that an artist with a checkered past can make a specialized waiver request, but it won’t necessarily be granted.Kan-Tor said that while new immigration restrictions and bans under US President Donald Trump aren’t aimed at Israelis, the process has become stricter.“A lot of things have changed,” he said. “Even if the restrictions aren’t new, the level of rigor is higher, the scrutiny is much more intense... they’re asking for more forms, and there’s more bureaucracy.”And while Benayoun claimed politics were to blame for his visa troubles, Kan-Tor said he had his doubts.“In my 25 years in this business I have almost never seen a political decision,” he said. “A visa denial could be for all sorts of petty reasons – but politics rarely comes into play.”