Mothers of the three youths come to Knesset, where MKs from nearly every party from Meretz to the Bayit Yehudi showed their support.

By LAHAV HARKOV
JUNE 25, 2014 19:45
Mothers of kidnapped teens from left: Rachel Frankel, Bat-Galim Shaer and Iris Yifrah, June 25, 2014, Knesset.
(photo credit: MARC ISRAEL SELLEM)
Advertisement
Lawmakers from across the political spectrum, from Meretz to Bayit Yehudi, showed support in the Knesset on Wednesday for Rachel Fraenkel, Bat- Galim Shaer and Iris Yifrah, the mothers of Naftali, Gil-Ad and Eyal, the teens abducted in Gush Etzion on June 12.“When I see the boys I see my seven children,” MK Shuli Moalem-Refaeli (Bayit Yehudi), who organized the meeting, said.“Thirteen days passed since they were kidnapped and we are holding our breath.What are they experiencing? Do they know the great efforts we are taking to save them? We have had 13 days of pain.”Yifrah prayed that “just as God gave us this test, He should grant us strength to understand it and do the right things.”“I came here as a mother who is worried and can’t sleep at night. I am speaking to your hearts,” she said. “Call for the government to keep acting and do everything to bring our boys back as soon as possible.”Fraenkel said that regardless of the fact that all three of the missing youths are religious Zionists, all of Israel, no matter what the background or ideology, is united in the hope of bringing them back, and supports the IDF soldiers who are searching for them.“We pray and beg God, but he will do what is right. There are many possible outcomes, but we know that many acts of kindness came from this ordeal,” she said.Shaer issued a call to action.“If the prime minister knows who the kidnappers are, he must put pressure on them – worsen the conditions of prisoners, cut funding – so Hamas knows it doesn’t pay to kidnap. Ramadan is coming and they will celebrate; it cannot be that the Palestinians can just go back to their routine,” she said.She addressed the government directly by wondering whether it was “thinking outside the box” to bring the boys back.“The people of Israel will judge you on the outcome,” she continued. “If you have information that [the captives] are alive, you must bring then back alive.”Economy Minister Naftali Bennett, a member of the security cabinet, said the government was “hitting Hamas, its institutions, its money and its activists.”“There is no stone we will not overturn to try to bring back our boys,” he added.“Every day that passes is bad. I hope we’ll see them home soon.”Bennett commended the mothers for being “part of the chain of brave Jewish women throughout history.” 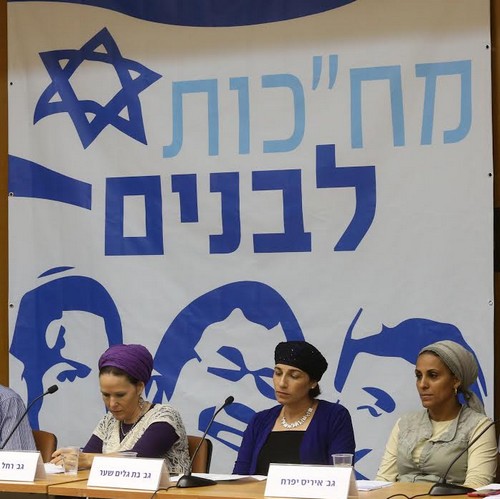 Every non-Arab party had representation at the event, though several MKs – Zehava Gal-On (Meretz), Tamar Zandberg (Meretz) and Adi Kol (Yesh Atid) – left during Housing and Construction Minister Uri Ariel’s remarks.“As our sages said, if someone wants to kill you, kill them,” Ariel said, sparking the apparent walkout. “There cannot be a situation in which we don’t have routine and quiet and there they get free electricity. That is not the behavior of a responsible, sovereign state.”Gal-On, Kol and Zandberg denied they had walked out in protest, saying the timing was coincidental.“I came here to give strength to the mothers, not to hear Uri Ariel say we need to crush [the Palestinians] and call for collective punishment,” Zandberg explained. “I needed to leave anyway and I tried to do so quietly. I don’t think the Right should have used this platform to spread their political views. They should be explaining themselves, not me.”Others on the Left spoke at the conference.MK Shelly Yacimovich (Labor) said: “Our hearts are beating as one and we are all praying for the boys to come back. This doesn’t have to do with political opinions; this is a national mission.”Yesh Atid MKs called on the international community to take a larger part in helping release the captives.“I wrote to [US First Lady] Michelle Obama last week,” MK Aliza Lavie (Yesh Atid) said. “America’s silence tells a painful tale.”MK Pnina Tamano-Shata (Yesh Atid) said that “just as the world condemned the Boko Haram in Nigeria [for abducting some 200 school girls], people should condemn terrorism against these three innocent children and not see it as part of the greater Israeli-Palestinian conflict.”