Israel expects many Hamas facilities will be destroyed by Operation Protective Edge, but then wants the international community to become involved in taking measures – as yet undefined – to prevent them from being rebuilt. 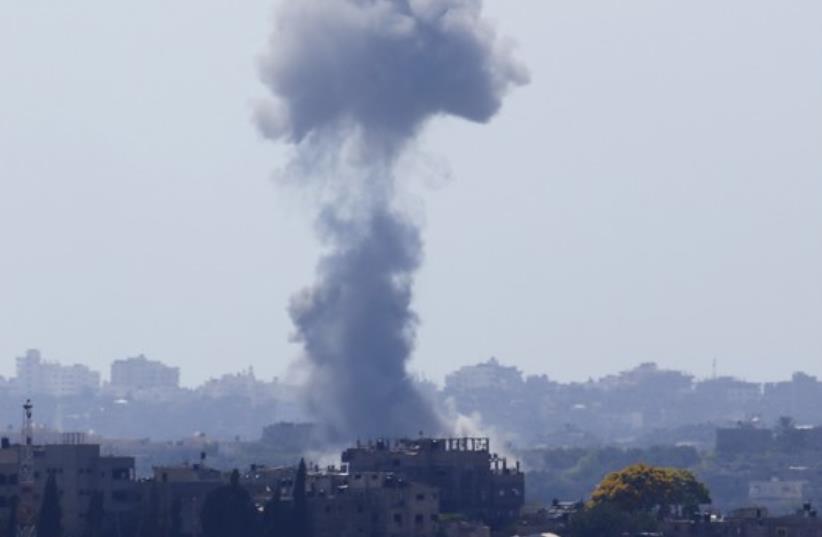 Smoke rises after an explosion in the northern Gaza Strip
(photo credit: REUTERS)
Advertisement
Tuesday was a roller coaster day that started with talk of a cease-fire, and ended with fire that would not cease.In the early hours of the day, however, when it appeared – at least in theory – as if the Egyptian- brokered cease-fire might lead to an end to Hamas’s rockets and Operation Protective Edge, diplomatic officials said that the security cabinet agreed to the Egyptian proposal in order to “give an opportunity for the demilitarization of the Gaza Strip.”The idea of a demilitarized Gaza Strip is an idea that Prime Minister Binyamin Netanyahu and his spokesmen began talking about last week, and that he has raised in his numerous conversations over the last few days with leaders from around the world.Netanyahu, by design, has kept the goals of the recent Gaza campaign modest.Unlike his foreign minister, Avigdor Liberman, he never spoke about taking over Gaza or toppling Hamas – but rather of restoring quiet and delivering a severe blow to Hamas’s infrastructure.But what, exactly, does delivering a severe blow to Hamas’s infrastructure mean? In addition to knocking out command centers, rockets, storehouses and factories where the rockets can be produced, it means keeping Hamas from being able to rearm once this round ends.Or, in other words, it means demilitarizing Gaza.But, at least at this point, there does not seem to be an operative plan for attaining this goal, or in getting the international community to join in the effort.There is the recognition of the need to put this issue high up on the international agenda, but regarding how actually to strip Gaza of its rockets, that is a different issue altogether.Diplomatic officials mandated with drawing up Israel’s messages abroad have had a bit of difficulty over the last few days formulating the idea, because – one official said – it seems so far fetched.“I can’t say demilitarize Gaza,” one official said, “People will laugh in my face.”Instead, the terminology being used is to “dismantle” the rockets and the tunnels.The idea of demilitarizing Gaza has its roots in the Syrian precedent, and the fact that the US and Russia managed to successfully dismantle Syria of the vast majority of its chemical weapons stockpile.Netanyahu likes that model, and has repeatedly praised US President Barack Obama for it.Indeed, he has called for the same paradigm to be used with Iran: dismantling their nuclear infrastructure.And if it worked in Syria, and is a goal for Iran, then why not extend the pattern to Gaza? Because Gaza is not Syria. It is not a state, it does not have a recognized governing authority, and it is hard to imagine the US, Russia or even the Arab League monitors waltzing into Gaza and getting Hamas to voluntarily hand over their rockets.That being the case, those advocating demilitarizing Gaza argue that it is clear that when this round of fighting eventually ends, Hamas’s capacities will be severely depleted.The question will then be how to keep them from re-supplying, either by smuggling arms into Gaza or manufacturing their own rockets, and that is where the international community comes into play.Over the years the main smuggling route was from Sinai into Gaza through the tunnels, but that is a route that will be much more difficult now, as Egypt under President Abdel Fattah al-Sisi has clamped down.Even so, Israel wants to see the international community more effectively intercept the arms coming from Iran and Sudan before they even get close.The second issue has to do with the weapon production capacities that exist inside Gaza.Israel expects that many of these facilities will be destroyed by Operation Protective Edge, but then wants the international community to become involved in taking measures – as yet undefined – to prevent them from being rebuilt.Anyone counting on international efforts to demilitarize Gaza should, however, remember UN Security Council Resolution 1701 that ended the Second Lebanon War in 2006.That resolution included a clause stipulating that the area from the Israeli border to the Litani River be “free of any armed personnel, assets and weapons other than those of the Government of Lebanon.”And the result: Before the war Hezbollah had some 6,000 missiles; today that number is estimated at more than 60,000. Sobering figures, indeed.