Don't worry Israel, Joan Rivers is behind you

"If New Jersey were firing rockets into New York, we would wipe them out" iconic comedian says.

By JPOST.COM STAFF
JULY 26, 2014 18:08
Joan Rivers
(photo credit: REUTERS)
Advertisement
American comedic icon Joan Rivers came out this week in support of Israel's right to defend itself against Hamas rocket fire from the Gaza Strip. Israel is in day 19 of Operation Protective Edge, an offensive that began to stop the rocket fire and destroy the network of terrorist tunnels leading from the Palestinian seaside enclave into Israel. "Let me just tell you if New Jersey was firing rockets into New York we would wipe them out. If we heard they were digging tunnels from New Jersey to New York we would get rid of Jersey," Rivers told a TMZ reporter. "So I don't want to hear anymore, oh, we'll do a partial truce," she added.  In a direct address to the Palestinians, Rivers said: "You cannot throw rockets, and expect people not to defend themselves."  Asked about civilian casualties, Rivers attacked Hamas's practice of storing weapons in private homes in Gaza. 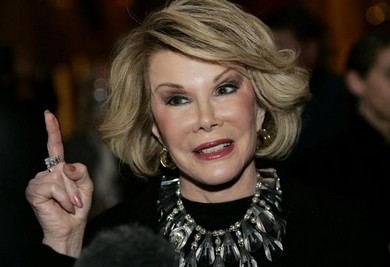