Initiative calls for end of all "hostilities" from both sides, meeting in Cairo within 48 hours after quiet restored; Kerry expected to visit Egyptian capital; security cabinet to meet Tuesday to discuss truce proposal. 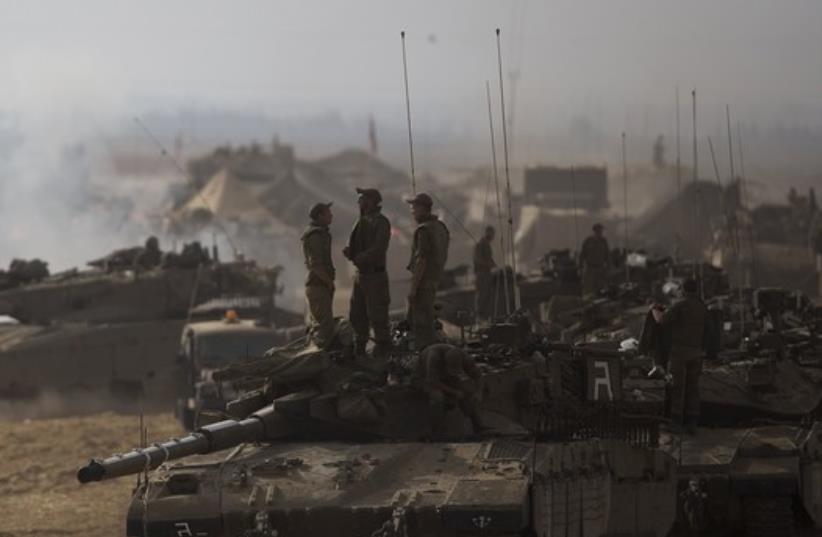 Israeli soldiers stand atop a tank at a staging area, near the border with the Gaza Strip
(photo credit: REUTERS)
Advertisement
The Egyptian government on Monday proposed a ceasefire between Israel and the Palestinian groups in the Gaza Strip according to which the two sides would end “hostilities” as of 9 a.m. Tuesday.The proposal, which was published on the eve of US Secretary of State John Kerry’s expected visit to Cairo, states that Israel would end all “hostilities" in the Gaza Strip from the land, air and sea and would refrain from launching a ground offensive that targets civilians.Related:According to the proposal, the Palestinian factions in would cease all “hostilities” emanating from the Gaza Strip against Israel.The Egyptian initiative calls for the reopening of the border crossings into the Gaza Strip to passengers and goods as the security situation becomes stable.The proposal calls for receiving representatives of the Israeli government and the Palestinian factions in Cairo within 48 hours after the ceasefire goes into effect to discuss “confidence-building measures” between the two sides. The Egyptians, according to the plan, would hold separate talks with the Israelis and Palestinians in Cairo.The security cabinet was slated to convene on Tuesday morning to discuss a ceasefire deal proposed by Egypt on Monday night.Hamas spokesman Fawzi Barhoum said in response to the Egyptian ceasefire proposal that his movement would not accept any truce that excludes the conditions of the Palestinian groups and people.Earlier on Monday, the Palestinian Authority said that the countdown for reaching a new ceasefire between Israel and Hamas had begun.“Hamas is desperate for a ceasefire,” a Palestinian official in Ramallah said. “They have appealed to Qatar, Egypt and Turkey to help in reaching a new truce with Israel.”The official claimed that Hamas has been under heavy pressure from Palestinians in the Gaza Strip, who have “paid an unusually heavy price” during the fighting.Hamas and Islamic Jihad officials reiterated their readiness to reach an agreement that would end the current fighting with Israel.Islamic Jihad leader Ramadan Shalah said that his organization would agree to a new truce with Israel if the “aggression” on the Gaza Strip stopped and the border crossings are reopened.Shalah said that the only party that could play a role in achieving a truce is the US Administration. He added that without Egyptian mediation, it would also be impossible to stop the fighting.Several other Palestinian groups on Monday appealed to Egypt and other Arab countries to step up their efforts to end the Israeli military offensive in the Gaza Strip. Following an emergency meeting in the Gaza Strip, the “national and Islamic forces” called on the Egyptians and Arab countries to put pressure on Israel to “halt all forms of aggression” on the Palestinians. The groups also called on the Palestinian Authority leadership to proceed with its attempts to join international treaties and conventions, particularly the International Criminal Court, in order to isolate and impose sanctions on Israel.They also called on the PA leadership to “reconsider” all agreements signed between the PLO and Israel.While diplomatic officials have not stated what Israel’s conditions are for a ceasefire, they have said over the last few days that the type of agreement that would lead to quiet for only a year or two – such as the agreement that led to the cease-fire in Operation Pillar of Defense in 2012 – would not be acceptable.The IDF has destroyed around a third of Hamas's rocket arsenal, half of its rocket production facilities, as well as a large portion of homes used as command and control centers by Hamas brigade and battalion commanders. Hundreds of storage facilities hidden underground have also been destroyed.While the IDF's firepower has been highly effective, Hamas and Islamic Jihad's firepower has been rendered nearly totally ineffective due the Iron Dome air defense system.Hundreds of planned air strikes did not receive the green light from IDF brass, due to the risk they posed to Palestinian noncombatants, meaning that a large number of vital Hamas operational targets were left untouched by Israel.Military sources explained that there are two main stages in this type of asymmetrical conflict in which a terror organization uses built-up areas as their bases. The first part, where Israel is still at, is based on the goal of achieving deterrence, and the second part is aimed at achieving full military victory, defined by the IDF as removing all of Hamas's offensive capabilities in the Gaza Strip.Herb Keinon and Yaakov Lappin contributed to this report.