By LAHAV HARKOV
Twitter [Illustrative]
(photo credit: REUTERS)
Advertisement
Several journalists from around the world reported seeing rockets fired from civilian areas in Gaza in recent days, and received threatening tweets in return accusing them of “informing” the IDF.On Wednesday, Peter Stefanovic of Australia’s Channel Nine News tweeted: “Hamas rockets just launched over our hotel from a site about two hundred metres away. So a missile launch site is basically next door.”An account called @ThisIsGaza said this was Stefanovic’s fourth time “passing and fabricating information to Israel... from GAZA” and threatened to sue him.Another account, @longitude0 wrote: “You are a cretin. Are you working for the IDF” and “in WWII spies got shot.”Financial Times Jerusalem Bureau Chief John Reed reported seeing “two rockets fired toward Israel from near al-Shifa hospital, even as more bombing victims were brought in.”Shifa, in Gaza City, is the main medical facility in the Strip.In response, @Saritah_91 tweeted: “We’ll hold you responsible if Israel uses your tweet to bomb the hospital & then justify it.”Another twitter user, @ Faysal_FreeGaza, said he’s “subtly justifying and encouraging IDF attacks on hospitals,” and @Maysara_ ara wrote: “Get out of Gaza u informant.” 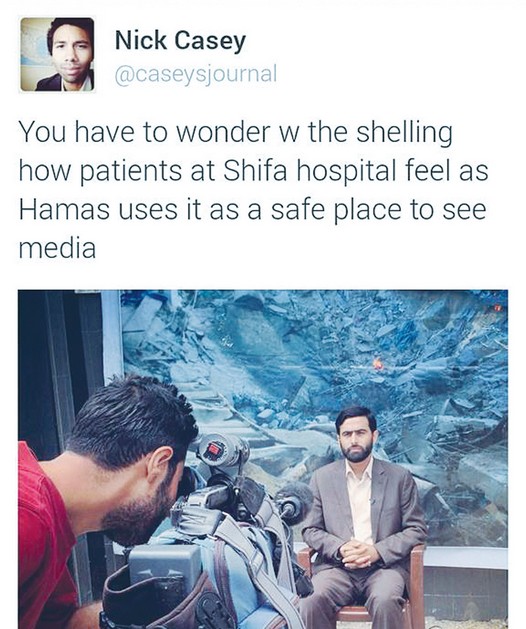 twitter
Wall Street Journal correspondent Nick Casey tweeted on Tuesday a photo of a Hamas official using Shifa hospital for media interviews, writing: “You have to wonder w the shelling how patients at Shifa hospital feel as Hamas uses it as a safe place to see interviews.”By Wednesday, the tweet was deleted, but pro-Palestinian Twitter accounts continued to include him on lists of “journos in Gaza [who] lie/fabricate info for Israel” and “must be sued for crimes.”On Sunday, Janis Mackey Frayer, a correspondent for Canada’s CTV, tweeted that, while in Gaza City’s Shejaiya’s neighborhood, she “saw several Hamas gunmen.One passed dressed in a woman’s headscarf... tip of a gun poked out from under cloak.”She received threats similar to those sent to other reporters.Harry Fear, a journalist from the UK reporting from Gaza for RT (formerly Russia Today) television, tweeted last week: “Early morning Gaza rockets were fired into Israel. A well-known site in W. Gaza City, near my hotel, was among the origins, confirm locals.”Fear then took on the critics, tweeting soon after that he rejects “loaded complaints that I ‘informed’ Israel about the specifics of Gaza military sites... These sites are well-known among locals and internationals here.”“Should a journalist only report the noise and ferocity of Israel’s attacks & not the sounds of Gaza’s rockets? Both terrify people,” he tweeted.Later that day, Fear tweeted: “Al-Wafa hospital has been hit in the last while; injuries reported – this is the hospital with human shields.”