'I have no sympathy for Hamas,' Obama says

US President says Gaza cannot sustain itself, shut off from world, international community will have to play role in rebuilding Strip.

By MICHAEL WILNER
AUGUST 7, 2014 02:29
U.S. President Barack Obama holds a news conference at the conclusion of the the U.S.-Africa Leaders Summit at the State Department in Washington, August 6
(photo credit: REUTERS)
Advertisement


WASHINGTON – US President Barack Obama sympathizes with the people of Gaza, he said – but reserves no such sympathy for its “extraordinarily irresponsible” Hamas government.“I think it is important to remember that Hamas acts extraordinarily irresponsibly,” Obama said on Wednesday, “putting civilians at risk” with its taunts against Israel, and its placement of rocket launchers in civilian areas during conflict with the Jewish state.“I have said from the beginning that no country would tolerate rockets being launched into their cities,” he continued. 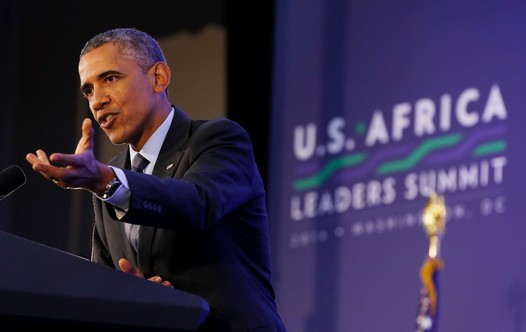 “And as a consequence, I have consistently defended Israel’s right to defend itself, and that includes doing what it needs to do.”The president was responding to a question on whether he agreed with Prime Minister Binyamin Netanyahu’s assessment of Operation Protective Edge, as a “justified” and “proportionate” military response to Hamas’s rocket fire and tunneling into Israel.Obama also expressed “distress” at the conditions of Gaza’s civilians, after much of the Strip’s infrastructure was destroyed during the four-week campaign.The international community will have to assist in the rebuilding of Gaza, he said.“Gaza cannot sustain itself, permanently, closed off from the world.”
Advertisement
Subscribe for our daily newsletter