MDA emergency dispatchers are on the front lines of conflict

Ashdod, Ashkelon and Sderot fighting to balance calls about rockets with regular load of medical emergencies. 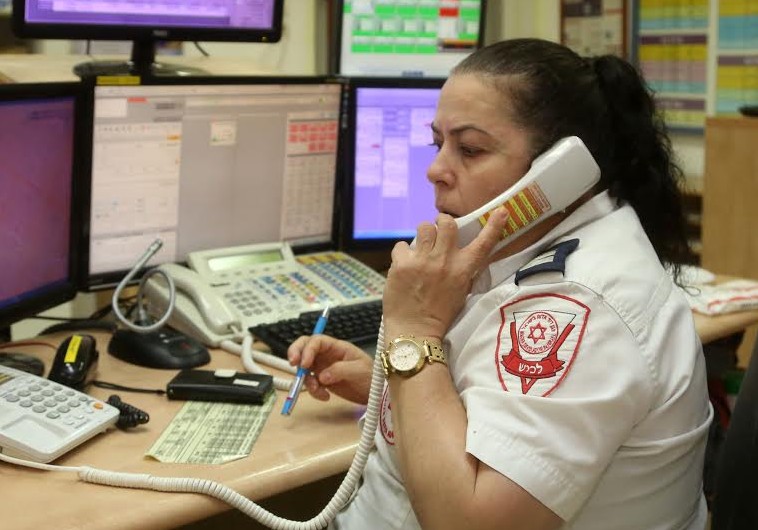 “There are three people suffering from shock in a house, who has responded to them?” asked Magen David Adom dispatcher Yehudit Dahan.She spoke loudly so her voice could be heard over the din of a dozen people trying to respond to reports that a rocket had fallen in Ashkelon on Sunday around 12:30 p.m.Her black hair was pulled back in a ponytail and she wore a white medical shirt as she sat with a telephone to her ear at the MDA center in the city of Ashdod, which also serves as the central dispatch area for a region that covers the cities Sderot and Ashkelon. It was here that dispatchers first received a report that the Iron Dome anti-missile system had failed to intercept a rocket over Ashkelon. It had fallen on a sandy stretch of barren ground on the side of an Ashkelon street.A team from MDA was immediately dispatched to the scene and it reported back that a 16-year-old was wounded.People then called in about shock victims, for which more ambulances were needed.“Who has gone out there?” Dahan asked as she looked at three computer screens directly in front of her. Additional information was also displayed on a larger screen on a back wall.When she received confirmation that an ambulance was on its way, she told the caller, “we are already on the way to you.”Since Operation Defensive Edge began six days ago, the center has doubled the number of ambulances in the region to 55.“Many rockets land here [in this region] and we have to give the best service possible,” said Ami Evgi, the head of the Magen David Adom station, standing in the dispatch center at the time of the attack to ensure that everything went smoothly.Evgi said that the tricky part was to have to deal with normal medical emergencies such as births and heart attacks alongside racing to the sites of rocket attacks.When an attack occurs, the center receives reports from multiple sources, including its own teams who check out each scene, Evgi said.They have a fairly rapid response time, he said, which during this operation ranges from a minute to seven.When shards from an exploding rocket fell in the community of Nitzan, located between Ashdod and Ashkelon, on Sunday, they had someone stationed there, he said.The center is helped in its efforts by volunteers.Among them is Arie Elmaleh, a medic from Paris, who came to Israel specifically to volunteer in the operation.“I came to help, because all Jews are responsible one for the other. It is important for us to help them and to be involved with what is happening in Israel,” he said.On the street corner in Ashkelon, workers were busy repairing the damage done to it, including the electricity line that was cut in the blast.Media crews still had their cameras focused on the corner and their reporters did live broadcasts from the site.Among those who made their way down there was MK Nachman Shai (Labor), who examined the site and spoke of the importance of the Iron Dome system, which failed to stop this rocket but had halted so many others launched from Gaza against Ashkelon and other Israeli cities.Even the “most optimistic planners” never imagined how successful the system would be in preventing casualties, he said.Israel, Shai said, should thank the United States and its President Barack Obama for giving Israel the missile-protection system.“Iron Dome is something that this country should thank – every morning, afternoon and night – President Obama.“We are very critical of Obama, but when it comes to this, it is all him. It all happened in his term. It is a sign of friendship and support from the United States to Israel,” he said.