1944 Warsaw Uprising: Why a nuanced history is rejected

Should the Warsaw Rising Museum have exposed the warts of the Home Army? 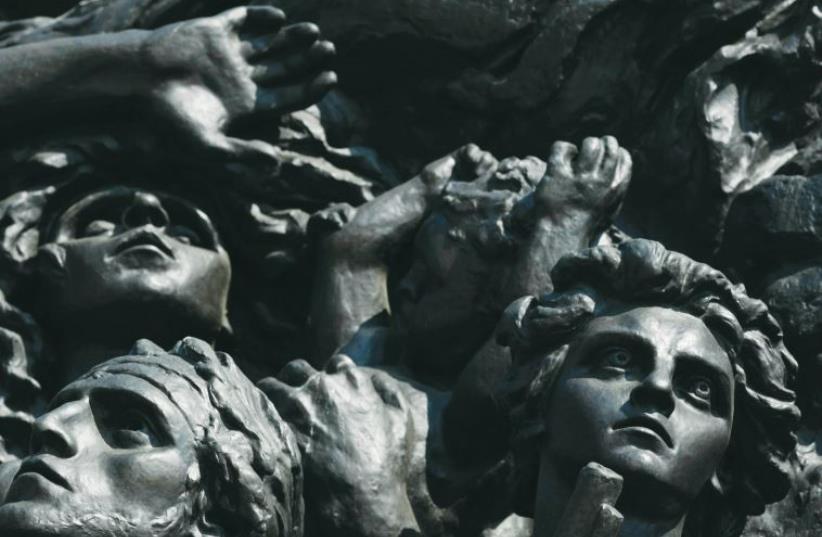 A part of the scene on the Monument to the Ghetto Heroes in Warsaw.
(photo credit: KACPER PEMPEL/REUTERS)
Advertisement
US President Donald Trump’s visit to Poland brought to the fore comments about the 1944 Warsaw Uprising. Despite limited resources, combatants led by the Polish Home Army rose up in Warsaw and withstood the Nazi response for 63 days, resulting in the destruction of more than half the city, the execution of upwards of 100,000 after the defeat, and tens of thousands of Poles being transported back to Germany to perform slave labor.When I by chance visited the Warsaw Rising Museum just after its 2004 opening, I witnessed firsthand the powerful grip it had on the Polish populace. Three generations of Poles visited with grandparents acting as guides for their children and especially their grandchildren. The way in which the museum and the aged survivors narrated the history highlighted how blemishes of the Home Army are covered up or ignored. These blemishes include its decision to begin the Rising and its behavior toward the remnants of Polish Jewry.In 1939, invading Soviet forces imprisoned, later to be killed, much of its officer corps. As it rebuilt a secret underground, the Home Army waited patiently, hoping the war would substantially deplete the Nazi and Soviet armies. Only then could the Home Army play an important role in the liberation of Poland. However, when Soviet forces began to enter Poland in 1944 and were approaching Warsaw seemingly unimpeded, the Home Army leadership felt it had to act. It feared that if Soviet forces, with a small contingent of Polish forces allied with them, liberated Warsaw, it would be impossible for the Home Army to sustain legitimacy as the leaders of the Polish resistance.The Home Army leadership hoped to begin the uprising a day or two before the Soviet forces entered Warsaw and therefore, just as De Gaulle did with the Paris invasion, be able to take credit for the liberation. The problem, of course, was that the Polish and French situations were dramatically different. In France, the Allied forces wanted to buttress De Gaulle as a counter to the left-wing resistance and so coordinated his triumphant return. By contrast, the Home Army and the Soviets were mortal enemies so that there was absolutely no chance of coordination, let alone Soviet support for a Home Army-initiated campaign.On July 31, reports reached the Home Army command that the Soviets had breached the Vistula, 32 km. from Warsaw. While some believed more verification was needed, by a four to three vote it was agreed that the uprising would begin the next day. Despite receiving new reports that Nazi forces had rebuffed the Soviet advance, the Home Army plan went forward. The Nazi efforts successfully pushed back Soviet forces that had overextended their supply lines with their dash to Warsaw. It would take them a few weeks to regroup and be resupplied sufficiently to begin again their campaign.Not surprisingly, the Soviets decided not to immediately begin the campaign and indeed, impeded Allied efforts to provide material support to the Home Army. Their entrance would have likely increased the number of Polish killed in battle, however, a Soviet victory would have eliminated the massive reprisals by the Germans after the Home Army surrendered: executions, deportations and the systematic destruction of Warsaw.Instead, the Soviet forces shifted their war efforts elsewhere. Indeed, only after the German army had retreated from Warsaw did the Soviets enter, in January 1945.Rather than this nuanced discussion of the Soviet actions, the museum and the news report during President Trump’s Warsaw visit simply claim that the Soviets stood idly by on the shores of the Vistula, never mentioning that they were pushed back by German forces even before the uprising had begun.While there certainly were many righteous Polish Catholics who saved Jewish lives – and they are honored at Yad Vashem – no such honors can be bestowed on the Home Army. During the uprising, a modest number of surviving Warsaw Jews came out of hiding to join the efforts. The response of Home Army combatants was either to drive them away or kill them. This anti-Jewish attitude was similar to the Home Army’s approach to the Jews that had escaped to the forests. Because they sometime stole food from Polish villagers, these Jewish groups were considered “bandits” and often hunted down by Home Army contingents.The Home Army also counseled Jews against fighting back in cities and camps. In July 1943, the Nazis began deportation of Warsaw Jews. Through its allies in the Polish Socialist Party, the Home Army convinced the Jewish Bund to vote against beginning a revolt. That decision was supported by the Orthodox community, leading the left-wing Hashomer Hatzair to desist from beginning an armed struggle. As a result, the Nazis deported 250,000 Jews to the gas chambers without resistance. The Home Army also discouraged revolts in Auschwitz because it contained a labor camp for Polish Catholics. As a result, symbolic Jewish revolts only occurred in Warsaw after virtually all Jews had been deported and in Auschwitz after virtually all Jews had been cremated.Should the Warsaw Rising Museum have exposed the warts of the Home Army? Its foolhardy, disastrous decision to begin the uprising, and its adverse actions towards Polish Jewry? The museum’s role is to recognize the heroism of the Polish resistance in the face of Nazi terror and not to judge the Home Army. All national historical museums make political judgments on which details are highlighted and which are ignored. In the Polish case, their choices, while understandable, are not necessarily justified.The author is Broeklundian professor at Brooklyn College and CUNY Graduate Center.