A bitter pill: The humanitarian trap of Gaza

Hamas steals aid. Yet, NGOs continue to deny this reality. 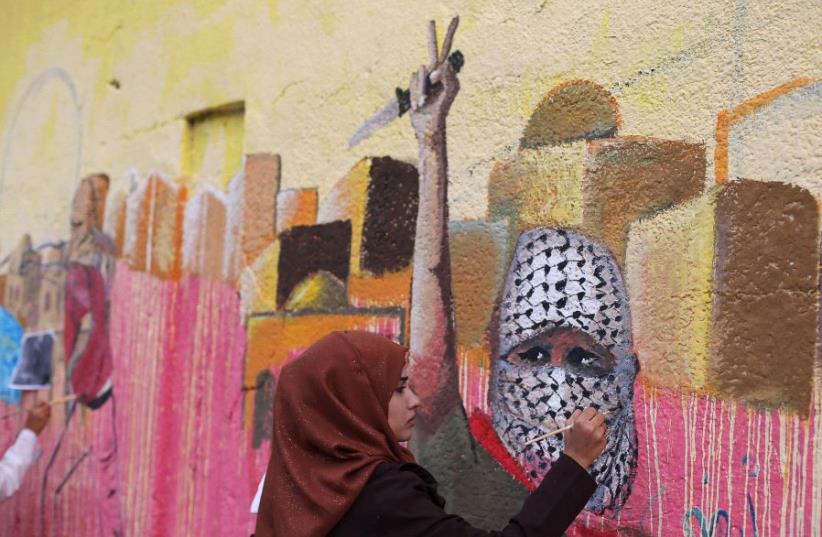 A Palestinian woman paints a mural, depicting a masked Palestinian holding a knife, in support of Palestinians committing stabbing attacks against Israelis, in Rafah in the southern Gaza Strip
(photo credit: REUTERS)
Advertisement
Nearly two weeks ago, two sisters were arrested while smuggling explosives from Gaza into Israel. One of them had acquired a travel permit to enter Israel in order to receive cancer treatment, and the explosives were hidden inside a pill bottle. This is a prime example of Hamas’s abuse of humanitarian need and medical coordination with Israel, to engage in terrorism.A similar incident occurred last week, when an 18-year-old Palestinian from Nablus committed a stabbing attack in Tel Aviv, wounding four. The terrorist entered Israel on a one-day pass to participate in an event with “Natural Peace Tours,” an organization claiming to forge relationships between Israelis and Palestinians.Unfortunately, these are some of the ways that humanitarian aid, human rights and peace have been weaponized in the service of terrorism by Palestinian groups.In parallel, the self-proclaimed protectors of these values, non-governmental organizations (NGOs) that claim to promote human rights, erase this reality, as if Israel does not face a persistent terrorism threat. Instead, Palestinian, Israeli and international NGOs repeatedly and consistently accuse Israel of arbitrarily restricting Palestinian “freedom of movement” and “right to health.”For instance, Medical Aid for Palestinians (MAP) and Physicians for Human Rights-Israel (PHR-I) have published briefings purporting to detail a lack of Palestinian access to healthcare. The first in their series demands that Palestinians in Gaza must have “unimpeded” access to hospitals in east Jerusalem, while failing to address the risks that an open border with a territory controlled by terrorists would pose for Israel. Essential security measures are labeled “bureaucratic control of movement.”Similarly, Israeli NGO Gisha’s raison d’être is to accuse Israel of arbitrarily blocking Gaza residents’ access to Israel. Gisha condemns Israel’s security restrictions placed on the flow of goods and people and claims that Israel has developed “a complex system of rules and sanctions” to control the “fundamental right of Palestinians to freedom of movement” and in violation of “basic rights including... the right to access medical care.” Needless to say, as the incident of the two sisters and many many others demonstrate, Israel’s security concerns are far from arbitrary.Gisha, like the other NGOs, fails to propose any realistic measures that would grant Palestinians greater cross-border access while addressing Israeli concerns about terrorism.World Vision, a massive international aid organization, has also been caught up in Hamas’ hijacking of humanitarian aid in Gaza. On June 15, 2016, Mohammed El-Halabi, the manager of operations for World Vision in Gaza, was arrested by Israeli authorities. El-Halabi is accused of diverting approximately 60% of World Vision’s Gaza aid to Hamas to build tunnels and fund other terrorist activity. The siphoned funds amount to approximately $50 million. The trial is ongoing.World Vision is not alone. Organizations that operate humanitarian programs in Gaza lack effective policies to monitor the aid they provide to the civilian population and ensure that it is not commandeered by Hamas for terrorism. In many ways, how could they – how could a private aid organization prevent a violent regime from imposing its thuggish demands? However, when NGOs refuse to prioritize establishing and enforcing strict anti-terrorism policies, it suggests that the organizations do not sufficiently recognize the threat of their aid being redirected to violent causes. When combined with their demands on Israel to reduce security restrictions to facilitate a freer flow of materials into Gaza, the specter of aid diversion seems quite likely indeed.The first step toward correcting these NGOs is to acknowledge the facts, as difficult as this may be for ideological groups. Hamas steals aid. It smuggles explosives in the medicine of cancer patients. During times of armed conflict with Israel, its leaders convert hospitals into command centers and fire rockets from nearby.Yet, NGOs continue to deny this reality. PHR-I ignores evidence that it collected of Hamas using hospitals to launch attacks. MAP refers to members of Palestinian Islamic Jihad as “paramedics” in order to accuse Israel of attacking medical workers. Gisha argues that there is no point to restricting what goes into Gaza since Hamas can build tunnels and munitions using materials already there – an absurd claim.To be sure, this reality is tragic and depressing. More often than not, innocent people in Gaza suffer.However, the solution does not lie in ignoring the threats in Gaza or in irresponsible demands that Israel compromise its security.The author is deputy editor at NGO Monitor.