A Dose of Nuance: The night Ahad Ha’am could have declared victory

At Beit Avi Chai on Shavuot, Jews of all kinds came to learn together and showed a tremendous amount of respect. 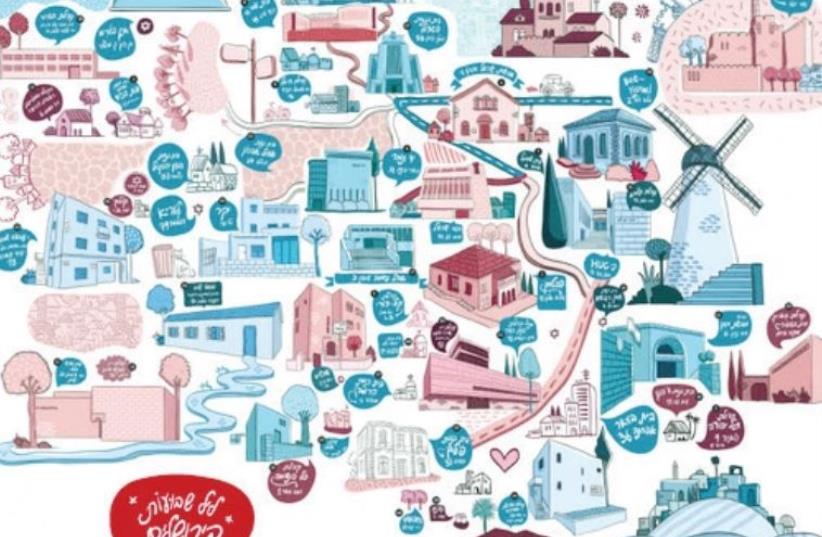 A map of Shavuot learning lessons throughout Jerusalem.
(photo credit: COURTESY DOV ABRAMSON STUDIO/JANGLO.NET)
Advertisement
Ever since its inception, Zionism has been more a conversation than a political movement. A movement, after all, seemingly needs a set of agreed-upon goals. Zionism, however, was always more divided than that.There were Labor Zionists arrayed against the Revisionists, and they disagreed on matters of the economy, how to handle the British and what sort of accommodation might (or might not) be possible with the Arabs.There was also the famous explosion over Herzl’s Uganda Plan (the territory for which was not, technically, in Uganda) – a disagreement that so angered delegates to the Zionist Congress that Herzl feared he might have destroyed the movement. Perhaps the deepest disagreement, though, was about whether or not the Jews even ought to try to create a state.Herzl, the father of political Zionism, insisted the Jews needed a state because it was only in a state of their own that the Jews would be safe, and because only if the Jews had a state could the Jews of Europe become normal.Ahad Ha’am, on the other hand, argued that Jews ought to head to both America and to Palestine; in America they would achieve wealth and influence, while in Palestine they would create what he called a “cultural center” that would influence and enrich Jews worldwide.As we commonly tell the story, Herzl and Ahad Ha’am never settled their disagreement. (It is, perhaps, an act of cosmic irony that they are bound to confront each other for eternity – where Herzl and Ahad Ha’am streets intersect in Tel Aviv, just south of the Shalom Tower.) In the narrative we commonly teach, however, Herzl won. After all, he sought a state while Ahad Ha’am did not – and the Jews have a state. So that would seem to settle matters, would it not? Actually, though, it settles nothing.For while, yes, Israel is in many respects the state that Herzl sought, it has not fulfilled the promises he believed it would. The Jews are not safest in Israel – if anything, they are far less safe than they are in several other places; as Iran creeps ever closer to a nuclear weapon, Israel will become the most dangerous place for Jews, not the safest. Nor has Israel “normalized” the condition of the Jews in Europe; life for Jews in Europe is getting worse, not better, and the existence of the Jewish state is fanning those flames.We would likely not have a Jewish state were it not for Herzl, but on those two scores, he was sadly wrong.Ahad Ha’am’s dream, however, has ironically come to nearly full fruition. Israel is, indeed, a veritable explosion of Jewish culture and Torah learning. A language has been revived, a vast literature of fiction, non-fiction and poetry has emerged. There’s a thriving theater, a pulsing and creative music scene with Jewish texts and themes at its core, and there are more people studying Torah in Israel, in a wider and more varied set of institutions, than there were in Europe prior to the war.Nowhere was Ahad Ha’am’s vision more vividly on display than in Jerusalem this past week, on the eve of Shavuot, as the streets filled with people of all ages and religious dispositions, all making their way from one class to another. Everywhere one turned, buildings and classrooms were packed.At Beit Avi Chai, every session was jammed and the lines seemed endless. At the Menachem Begin Heritage Center, precisely the same thing. People by the many thousands came out to study Torah because, well, because that’s what Jews do. Because Jerusalem’s night of learning is a spontaneous, bottom-up event unpolluted by the strong-armed, anti- intellectual and anti-pluralistic rabbinate, it attracted Jews from all walks of life.I sat in on a session at Beit Avi Chai taught by one of Jerusalem’s most popular and revered Orthodox rabbis, in a room filled with people wearing kippot and with a no smaller number of people taking notes on their iPhones. As far as I could tell, no one was bothered. The rabbi spoke, and people listened. Some wrote. Everyone learned. Together, thousands Jews from all walks of religious life turned Shavuot night into a night of study, of engagement, of breaking down barriers. Imagine if the rabbinate had been in charge.One organization, Rashut Harabim (www.rashut.org.il), printed thousands of copies of a map that showed where tikkunim were taking place across the city. (Its website had a downloadable version of the map, listing every session, teacher and time.) The map showed sessions at the Great Synagogue, Beit Avi Chai, the Conservative Yeshiva (Moreshet Yisrael), the Reform Movement’s Hebrew Union College and more. There were rabbis and non-rabbis teaching, Orthodox rabbis and non-Orthodox rabbis, men and women, some sessions about traditional texts and others not.It was what Jewish life in this country can be when the religious authorities stay completely away. It was the Jewish center of which Ahad Ha’am once dreamed, come to three-dimensional life. Torah coming forth from Zion, and in Zion. The Jewish people reborn, renewed, reunited and linked above all by a desire to continue the conversation that has long been Judaism.It was a moment that was not reproduced anywhere on the planet. And it was, though we might not have thought about it at that moment, precisely what Zionism was meant to make possible.As the weeks and months ahead drag us back into Zionism’s more nauseating political struggles, that night earlier this week is one worth keeping in mind. Herzl’s Zionism is still a work in progress, but Ahad Ha’am’s vision can declare victory.Congratulations are in order to him, and even more importantly, to all of us. The writer is senior vice president, Koret Distinguished Fellow and chair of the Core Curriculum at Jerusalem’s Shalem College, Israel’s first liberal arts college. His latest book, Menachem Begin: The Battle for Israel’s Soul, was published by NextBook in 2014.