A Dose of Nuance: Time to take the Twitter test

We have the capacity to get young people to embrace Israel or to walk away in anger at occupation, the rabbinate’s rejection of non- Orthodox Judaism and more. 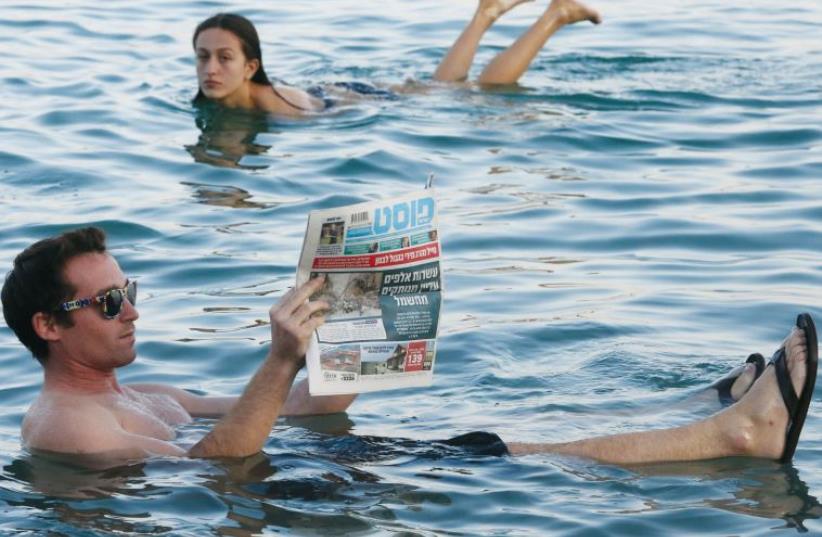 A man reads a newspaper while floating in the Dead Sea
(photo credit: MARC ISRAEL SELLEM)
Advertisement
In the past few weeks in the US and Canada, I found myself in places like Toronto, New York, Charlotte, Tustin and Palo Alto, to name just a few, to join communal discussions of Israel.The challenge was to see if we could do this civilly yet honestly; for Israel is the only topic that still interests Jews of all denominations and dispositions, yet has also become the one toxic topic that we are actually afraid of discussing. So in multiple cities we gathered – Left and Right, religious and secular, Israelis and Americans – to see if we could engender a different kind of conversation.It turns out that we could. In debates and panels, evenings and full days, the discussions were respectful and civil.We were also brutally honest about what we believe.Virtually everyone who spoke was “pro-Israel” and claimed to be profoundly committed to Israel’s security.Still, many of those on the Left insisted, Israel’s future could be guaranteed only if Israelis came to understand that the occupation is morally and diplomatically untenable, that Prime Minister Benjamin Netanyahu’s policies of building settlements to preclude the possibility of any future Palestinian state, all while lying about it, is alienating many young American Jews from Israel. Their role, these speakers argued, is to give voice to this disaffection on the part of Americans Jews, in the hope that Israel might take note.Young people in their 20s – in college and a few years beyond – said this, but so did the American Jewish community’s most significant thought leaders in their 30s and 40s. Yes, their writing is deeply critical of Israel, the latter group asserted, but is that not the very essence of political discourse? Is that not what has always characterized Jewish life at its best? They take the argument further, insisting that they are echoing the concerns of Israeli writers such as Ari Shavit.Shavit may be the most articulate exponent of these concerns, but people with his views represent a significant swath of Israeli society. So what is wrong with what these American writers are doing? Why do some people wish to silence them? Committed Israelis are also critical of Israel. Is the reason to silence these American Jewish liberals the simple fact that they do not live in Israel? The question is fair. Those of us who believe that Shavit’s writing is not only legitimate but crucial, while that of much of the leadership of the American Left seems “problematic” (to put the matter mildly), need to explain why. The answer, I think, lies in the “Twitter test.”It’s not just Twitter, of course. It’s also Facebook and the rest of the social media world. Many of these writers do care deeply about Israel, and some know a fair amount about it. In their private conversations about the Jewish state, some are at times nuanced and sophisticated.Why, though, does their writing rarely make profound claims about Israel’s importance, the fundamental justice of its cause or the intractable Palestinian view of the very idea of a Jewish state? Here is the test they should take: If a young American Jewish person were to read everything you’ve written about Israel, what would they encounter? How much is about the occupation or checkpoints, and how much is about Israel’s extraordinary accomplishments, its hardy democracy and its history of pressing for peace? What portion of your corpus addresses the undeniably anti-modern and even anti-Zionist Chief Rabbinate, while how much is devoted to new Israeli explorations of Jewish meaning and belonging? To what degree does your written record alert your readers to the richness – but also the soul-searching – that is key to much of contemporary Israeli literature? This matters because we cannot move the policy needle. Our collective writing and speaking in North America is not going to affect Israel’s policy one iota.The needle that we can move is the “devotion needle” – we have the capacity to get young people either to embrace the extraordinary phenomenon that is Israel, or to walk away in anger at occupation, the rabbinate’s rejection of non-Orthodox Judaism and more.Yet many of these writers produce work that is almost exclusively about bashing Israel, never reflecting on the much that is good about the Jewish state. That is what makes them different from Shavit, whose book My Promised Land was deeply critical of Israel but also an account of his profound love for his country. That difference is what makes these writers part of the problem, not the solution.Imagine they were writing about America, not Israel. If they focused almost exclusively on the horrific phenomenon of police shooting young black people or about the scourge of gun violence in American cities, would their concerns be legitimate? They would. Yet would they have captured the essence of what is still great about America? Not one bit.It is not that these Israel critics are wrong or that they have no right to speak. The problem is that they are nonstrategic. Is their primary aim to foment discord or to foster loyalty? Do they want young American Jews to think about Israel also with awe, admiration and devotion, or exclusively with disgust about what still needs fixing? The content of their Twitter feeds and Facebook pages suggests the latter.Therein lies the “sin.”If there is good news in all of this, it is that this period of the Jewish year has one central message – it is never too late to change.
The writer is Koret distinguished fellow and chairman of the core curriculum at Jerusalem’s Shalem College. His new book, Israel: A Concise History of a Nation Reborn, is forthcoming on October 18 from Ecco/HarperCollins.
Advertisement
Subscribe for our daily newsletter