A happy birthday from hell

On November 3, 1983, Snell gunned down William Stumpp, the owner of a small pawn shop in Texarkana, Arkansas. Snell thought his victim was a Jew 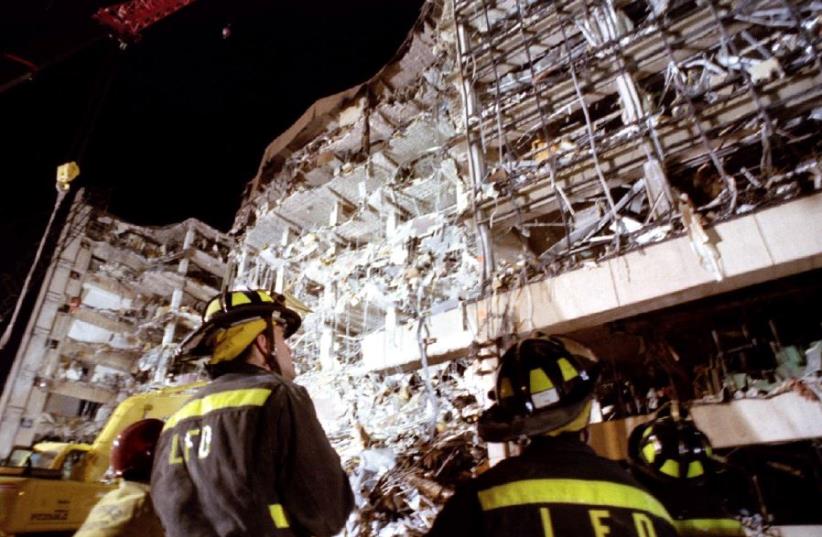 Firemen examine the wreckage of the federal building in downtown Oklahoma City that claimed the lives of 168 people.
(photo credit: REUTERS)
Advertisement
My birthday, June 30, was a hot, steamy day in Fort Worth, Texas. Little did I know it would become even more intense. The planned birthday celebration was about to be overshadowed by one man’s anti-Semitic hatred. His name, Richard Wayne Snell; and by the time I heard it, he would have murdered at least two people.Snell was a disciple of the white supremacist group The Covenant, The Sword, and the Arm of the Lord (better known as the CSA.) The CSA was not simply another quirky religious cult; its stated purpose was to start a war that would ultimately lead to the second coming of Christ. The members of the group believed they were literally God’s chosen people, and as such, could dominate all others.A CSA conference in 1983 brought together Jim Ellison, the group’s founder, and Snell.The two men discussed how they could bring down the Alfred P. Murrah Federal Building in Oklahoma City. However it was not Snell’s fate to be the one to accomplish that feat. That would fall to Timothy McVeigh and Terry Nichol. Snell’s plans would be sidetracked by his desire to kill Jews and African-Americans.On November 3, 1983, Snell gunned down William Stumpp, the owner of a small pawn shop in Texarkana, Arkansas. Snell thought his victim was a Jew; he wasn’t, but that didn’t negate the blatant anti-Semitism that compelled the murderer to action. The case confounded the authorities for more than eight months, until Snell’s rage would drive his downfall. On June 30, 1984, Snell was stopped on a lonely western Arkansas highway by State Trooper Louis Bryant. As Bryant approached the vehicle, Snell opened fire with a modified Colt .45, fatally wounding the trooper.A truck driver who saw the shooting followed Snell across the Oklahoma border and contacted the Broken Bow police. Snell ran headlong into a roadblock set up by the police. In the ensuing gun battle, he was captured, but not before being wounded by the officers. The man who murdered Trooper Bryant was indirectly responsible for the deaths of four other troopers who were killed in an automobile accident while en route to their comrade’s funeral.On that same day, I received a phone call from an agent at the Bureau of Alcohol, Tobacco and Firearms who gave me some spine-chilling information. When the ATF agents searched Richard Wayne Snell’s vehicle, they found a single piece of paper on the front seat of his car. Written on the paper were my name, address and unlisted telephone number. I was working closely with Israel Prime Minister Menachem Begin at the time and had produced a major television special based on my book, Israel America’s Key to Survival.My mother was an Orthodox Jew, Snell hated Jews and decided he had a birthday gift for me.Although Snell had been on death row since his conviction for the murders of Trooper Bryant and the pawn broker in Arkansas, the CSA continued to thrive and recruit. On April 19, 1995, the day of Snell’s execution, two CSA recruits, McVeigh and Nichols, were responsible for the devastating explosion that rocked the Alfred R. Murrah Federal Building. The resulting destruction killed 168 people, including 19 children in the second-floor daycare facility, and injured more than 800. It would be classified as the nation’s worst domestic terror attack until that fateful day on the 11th of September 2001.As I listened to the accounts of the blast, I was astounded to hear the name–Richard Wayne Snell. As he waited in the death chamber for his execution, he warned Arkansas Governor Jim Guy Tucker that he should “look over your shoulder; justice is coming.”Jew-hatred is still alive and well on planet earth. Like a cancer, it continues to mutate.Whatever you wish to call it – bigotry, anti-Semitism, Jew-hatred – it is vile. It fueled and fed the pogroms in Russia, the Holocaust in Europe, al-Qaeda, Hamas, Hezbollah and anti-Jewish movements in Iran and among Arab states. Jew-hatred must be taken seriously.Why? Let us look once again at the words of German Protestant pastor Martin Niemöller:
"When they came for the Jews, I remained silent; I wasn't a Jew.When they came for me, there was no one left to speak out."
Dr. Michael Evans is a #1 New York Times bestselling author. His book, Islamic Infidels,
is available at Dr. Michael Evans is a #1 New York Times bestselling author. His book, Islamic Infidels, is available at www.Timeworthybooks.com">www.Timeworthybooks.com