A momentous test for the Germany-Israel alliance

The two countries' relations are strained. 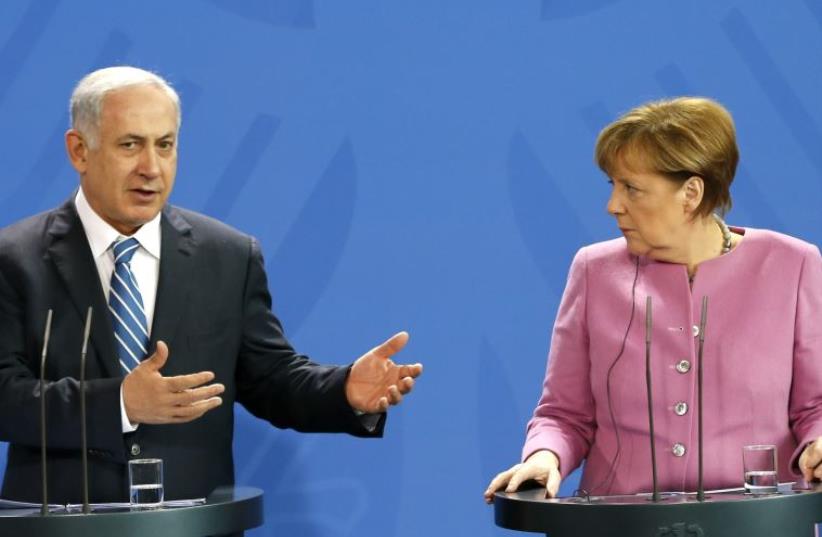 Netanyahu (L) and German Chancellor Angela Merkel address a news conference at the Chancellery in Berlin, Germany, February 16, 2016
(photo credit: REUTERS)
Advertisement
Modern Germany’s ties with Israel are at a historic low. This year’s joint cabinet meeting was canceled by German Chancellor Angela Merkel and additional signs of declining relations between the top political and national security echelons abound. Relations with Israel, and its role in the Middle East, should be a priority for the new German government.This dramatic deterioration occurs at a time when Germany and Israel still share core values, but need to strengthen their relationship to maintain basic characteristics introduced by their founders and perpetuated by the majority of their populations. Germany’s ability to continue to exercise its special responsibility in these relations is being put to a fateful test in the present decade.From the German leadership’s perspective, there is reason for concern with respect to developments in Israel. In deference to the solidarity once declared by Germany with Israel as part of its raison d’état, its only democratic ally in the Middle East is held to higher standards than any other country in the region, and it isn’t looking good from Berlin. On the other hand, Israeli leadership is disappointed about Germany and Europe’s actual contribution to resolving the region’s dire security and humanitarian problems. In recent years, the continent has shown very little vigor to get involved, from the massacre in Syria to Iran’s steady support of terrorism.Germany is substantiating its status as the leader of Europe, and on several issues, globally. Chancellor Merkel, likely to be reelected and establish a strong government, will, for the first time in the EU’s history, have the front seat leading the continent, alongside France’s President Emmanuel Macron. According to various polls, Merkel is the most highly trusted public figure in Europe and is four times more popular in the US than President Donald Trump. Not only has Germany become an economic giant, its emerging diplomatic leadership is now followed by attempts to form a European army. German influence inside the EU and globally will reach, if not surpass, that of France, traditionally a key player in the Middle East.Following the imminent national elections in Germany on September 24, Merkel and Macron will have the opportunity to encourage resumed Israeli-Palestinian peace negotiations. While previous peace agreements reached by Israel with Egypt and Jordan necessitated bilateral negotiations for the most part, an agreement with the Palestinians will require a multilateral process backed by an international coalition. Germany and France, side by side with the US, can lead the way.While a regional peace initiative involving Saudi Arabia, the UAE, Qatar, Jordan, Egypt, Israel and the Palestinian Authority is appropriate, one must adapt expectations in consideration of issues of far greater importance to Arab leaders in the region. These issues include Iran’s regional subversion, the situation in Syria, and the diplomatic crisis between Qatar and the Sunni states. These complex issues will not be resolved by putting pressure on Israel or the PA.The parameters of such a process have been subject to extensive discussion which need not be repeated here. A two-state solution is still the only game in town in order to reach a sustainable solution for both peoples.One should acknowledge, however, that while more citizens in the region prefer a two-state solution to any other alternative, currently there are two competing entities vying for recognition as the legitimate representative of Palestine. They are led by rival movements – Fatah in the West Bank and Hamas in Gaza.After the elections, Merkel and Macron will have sufficient leverage to generate and oversee a process on behalf of Europe. The regional powers with a vested interest in such a process, together with the Americans, will beat their own drum toward reaching a plan acceptable to all for returning the Palestinians and Israelis to the negotiation table.The incoming Israeli ambassador in Berlin, Jeremy Issacharoff, has a broad understanding of security and strategic issues. He is likely to develop a good rapport within Berlin’s policy circles. His other priority, improving Israel’s public standing in Germany, will probably be less successfully advanced, since he does not speak the native language – as is the case for most of Israel’s ambassadorial appointments to Europe.A bold ambassador should be able to help rebuild the intimacy long lost between Merkel and Prime Minister Benjamin Netanyahu. Moreover, in the absence of an active foreign minister in Jerusalem, it is in his power to bring Jerusalem to the table early enough in the process so its core concerns are addressed. The Palestinians, with the support of representatives of other relevant regional parties, should be able to do the same under the Berlin sky.No deadlines should be set, but a clear and unequivocal commitment to reaching a sustainable solution to the Israeli-Palestinian conflict, within a regional setting, should be demonstrated and acted upon by Germany and its partners. While territorial exchanges are taking place elsewhere in the region, Israel and Palestine should face a united front that will help them to take political risks and then benefit from security and other guarantees, when exchanging their own territories where necessary.The current volatile political situation in Israel and the PA does not justify continuous paralysis on the peace front. It is precisely now that Germany, the US, France and like-minded allies should establish a mechanism for jump-starting the process. Whether this will come to fruition under the current Israeli and Palestinian leadership or their successors, the German and European role in the process will not be in vain.The author is the founder of the European Leadership Network (ELNET), and of the Forum for Strategic Dialogue (FSD), promoting closer relations between Europe and Israel.The views expressed are his own and do not necessarily represent the views of ELNET or the FSD.