A new generation of mature citizens 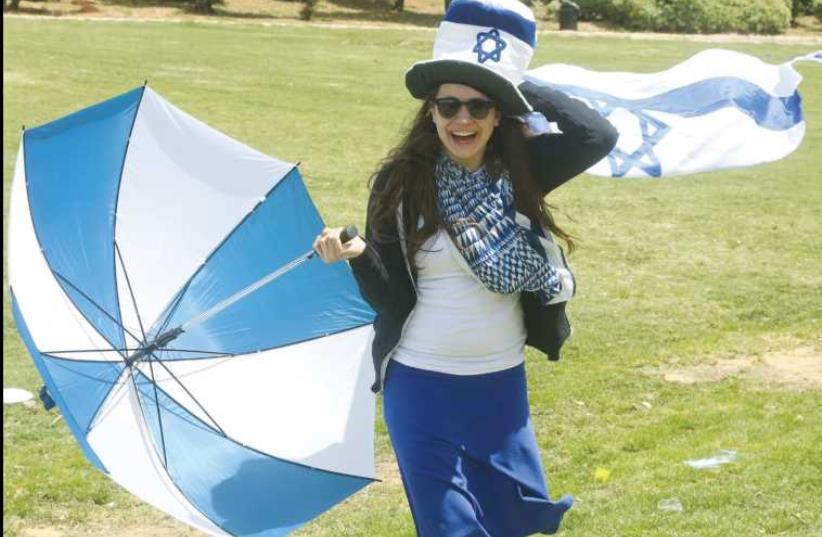 A young woman dresses up for Independence Day in Jerusalem’s Sacher Park.
(photo credit: MARC ISRAEL SELLEM/THE JERUSALEM POST)
Advertisement
On Israel’s 67th Independence Day, the House of Israel gathered to celebrate the sovereignty of the Jewish state.Some rejoiced in synagogues, others danced in public plazas, but most of us sat in front of the television screen and watched the torch-lighting ceremonies at the Mount Herzl parade grounds signifying the transition from Remembrance Day to the Independence Day festivities.At the heart of the ceremony, 14 outstanding Israeli citizens ascended the stage and kindled a torch in recognition of their shining achievements.Twelve torches representing the 12 tribes of Israel, the ancient tribes, each of which the Torah distinguished with a unique citation: “Zebulun shall dwell at the shore of the sea,” “Naphtali is a doe let loose,” “Judah is a lion’s cub,” etc. So too do the 12 torch-lighters exemplify the diversity of Israelis, who despite their individuality all stem from a common primeval root.
See the latest opinion pieces on our page
Men and women, young and old, Arab and Jew, secular and religious, the meritorious from among the Israel Defense Forces, the sciences and the scholars of the Torah, culture and economy, hailing from the periphery and the center of the country, from Jerusalem and from Galilean villages, they share a compassion for others. Their exemplary actions reflect their humanity, their willingness to accommodate others and their drive to excel.Prominent among torch lighters this year were Daniel Gold, developer of the Iron Dome system that defended Israeli towns from missiles during Operation Protective Edge, Rabbanit Malka Piotrkowski, a trailblazing scholar of the Gemara and women’s adjudicator, and Lucy Aharish, an Arab journalist who broke through the glass ceiling to star in the mainstream media. Another is Rami Levy, operator of a discount supermarket chain that puts Israeli citizens foremost in an effort to reduce the cost of living, and who deliberately employs Jews and Arabs together.Why does the State of Israel choose to observe the holiday by pointing out individual and sometimes anonymous citizens? Why not through organizations and institutions such as the IDF, Israel Military Industries, the high-tech industry, and our outstanding agriculture, parading their achievements rather than those of individuals? This is the foundation and its message: many voices, traditions, varied viewpoints and cultures form the weave of talent and originality that constitute the fabric of Israeli society.However, what excites during the holiday is less simple in the daily routine.It is difficult to maintain cohesion throughout the population, where rifts appear due to significant issues and differences.How is the Sabbath observed, who controls the country, who contributes more to the national effort and who impedes it? The tenacious character of every tribe sometimes threatens the lifestyle of another, or at least is perceived to do so. Powerful values crash together like thunder rolling in the rain, and the public tempest is intense.It is difficult to bridge the gaps when speaking about beliefs and opinions, when the religious overshadows the democratic, when the ethnic revolts against the civil, when pluralism confronts nationalism. Every “tribe” is comprised of principles that define its identity. The perception is if the values are relinquished, they will remain divided.Incomplete. Missing.The approach of Tzav Pius is to grant space to facilitate the coexistence of contrast and conflict, and embrace them as leverage for growth rather than fearing them. It is never too early to mold the internal world of a person, and so we start from kindergarten age.We invest in the younger generation, as they are the arrows in the quiver and we are the hand that launches them towards their future.We established a chain of kindergartens and schools integrating children from all walks of society, turning complexities into a platform for mutual cooperation. Our pupils benefit from a deeply Jewish experience, obtained within a pluralistic environment providing for the differences in Jewish traditions.This way, within the framework of the Tzav Pius soccer league, both observant and secular children participate.Regardless whether they are from the periphery or center of the country, they gather twice a week to practice and compete during weekdays, and not on the Sabbath as is common in Israeli sports.The natural interaction in the school playground, and on the playing field, we believe contributes to the depth of understanding, to bridge gaps of prejudice, and to become a lively foundation for creating and nurturing a new and improved breed of Israelis, unthreatened by diversity yet comfortable in its habitat and value system.During summer vacation, the innovative format for our joint religious-secular summer camp, adapting American- style programs for Israel, allows youths from all over Israel to participate in an exclusive experience that will be retained all year long. They will get to know themselves and others and bring out their innate talents, experiencing Shabbat together, and engaging in mutual dialogue about their Jewish Israeli identity.No lecture, workshop or symposium can compete with what is absorbed in its natural habitat, when the heart and mind are open to accept impressions, when the intuition has yet to be stained by politics, propaganda or rivalries.Our hope is to create a new generation of mature citizens, who possess a complex worldview and are conscious of the differences between diverse identities, so they may maintain a fruitful dialogue throughout all walks of life in Israel: the workplace, academia, arts and culture and will establish families raising their children according to these lofty values.Every student and their color, together the 12 stones on the breastplate of the High Priest, one for each tribe, with their strength, their brightness when shining together, and with answers for the largest questions in the life of the Jewish nation.The author is executive director of Tsav Pius, which promotes unity and reconciliation in Israeli society.