Where does responsibility lie for 48 hours without electricity, for phones being down or out, for cars and pedestrians perilously crossing streets and intersections with no traffic signals? 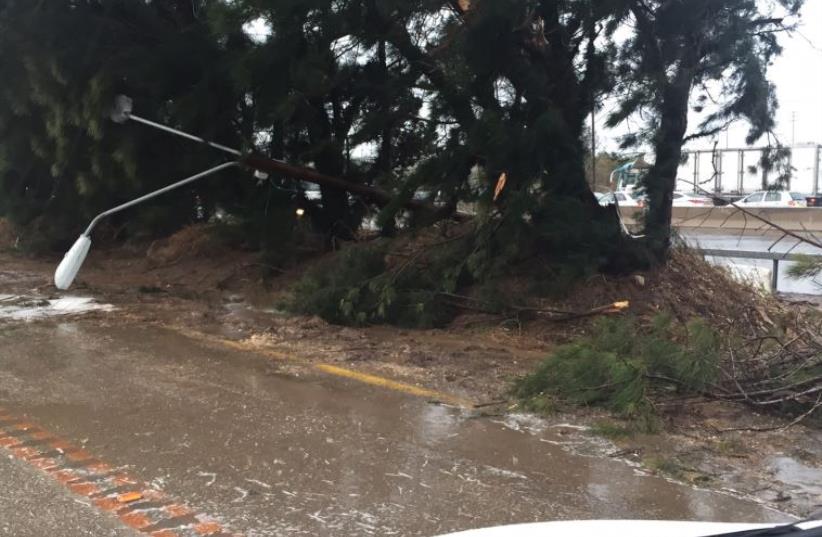 Stormy weather in Israel
(photo credit: MATI YAAKOBOV)
Advertisement
They stand tall among us, lining our streets and parks, silent through the long summer months and then, with no notice, they pounce. With a flash and a boom, we are back in the Stone Age with no electricity.Yes, I am talking about trees. Was this their revenge? Did the stately palms, wise old olive trees and husky oaks, from very different backgrounds, conspire together to plunge our lives into darkness. Of course it’s not their fault and we love the trees.So why then, maybe it is our fault? We pray for peace and health and a return to our ancient homeland. Granted, we don’t have a 100 percent rate of success with our prayers, but let’s not forget that three times a day for the past month we have been praying for “the winds to blow and the rain to fall.” Even though this part of our prayer was answered, I don’t think we can take the blame.So where does responsibility lie for 48 hours without electricity, for phones being down or out, for cars and pedestrians perilously crossing streets and intersections with no traffic signals.I tried to find out.If former US president Harry Truman were the mayor of a certain pleasant city starting with an “R” (and with more A’s than the Automobile Association of America), he would say “The Buck Stops Here” and he would take responsibility.Not so here. Here – No electricity? Ask the Electric Corporation.The traffic lights are out and no one is directing traffic? Ask the police. The city hotline doesn’t work? Hey, that’s Bezeq.Let’s start with the electricity – according to the municipality website, 20 Israel Electric Corporation teams are working round the clock. Parse that sentence well and not a single part seemed to be true.Why was the municipality “drinking the Electric Corporation Kool- Aid?” Why, at 1 a.m. on day three (!) of this adventure did I see my first IEC team and finally at 2 a.m.actually see them working. Why was I there and no city employee on-site? With some 1,000 municipal employees, could they not find 20 to accompany the IEC teams? If even just to be able to give reliable reports back to anxious residents.I am not exploring what the IEC did wrong – that has been covered extensively in the media. I did wonder whether the masks the workers wear are to protect them from the elements or, after this week, because they are afraid to show their faces in public. I asked one repairman if he was not embarrassed by what people were saying about them and he replied, “My family does not even have electricity.” A different repairman said the exact same thing.Is that the mantra taught at the Israel Electric Corporation Repair School? But I expect more of my elected officials. Why were the city politicians, so used to pounding the pavement of our one main street during election time, nowhere to be found? Why were the gates of city hall locked? And what about the traffic at gridlocked, dark intersections? – In a case like this, where the police were not around, the municipality needed to find a solution using their city security force or to get the police actively involved. How many traffic lights are there altogether in my city anyhow? And why did it happen? Back to the trees, they really can be troublemakers. A single overgrown tree triggered the North America Blackout of 2003. What helps keep trees out of trouble is annual pruning. This year’s budget seems to have been a little weak on that.The bickering between the Electric Corporation and the municipality was like of a pair of dueling barbers in a Marx Brothers movie.What did we expect? I expected the city to lead and not behave as victims. I would have expected direct assistance to residents.... Public buildings (schools, community centers, etc.) could have been opened to provide a warm and not pitch-black place to spend a few evening hours for kids and adults. Warm tea, coffee or soup could have been given out.Candles or flashlights could have been distributed to people in need.A well-lit (or even just lit) place to read a book or for kids to play would have been nice. Power strips and a place to charge our damn phones instead of running our parked cars as portable chargers would have been popular. Or at the very least the city could have ensured accurate, updated and detailed information reports on the city Facebook page or website.And who saved the day? The people! The people who made room in their offices for those who were blacked out.... The people who let others “borrow” computer electricity....The people who came to work to be productive, no matter how difficult it was.... The city employees who took the initiative to clear downed branches so that others could park their cars.... The visiting relatives who graciously shared their hotel rooms.... The lucky people with electricity who posted on Facebook inviting complete strangers into their homes....The fact that there was no looting or stealing or price gouging.The people who did not lose their sense of humor in spite of the above.Full disclosure.... This was written quickly between second (shorter) blackout on Wednesday and cleaning up from the flood.The writer is a resident of Ra’anana.