A shameful week in city politics

For weeks Barkat and his team had been peddling to us, his coalition partners, the idea of a strike as the only means of advancing negotiations with the Finance Ministry for the 2017 capital city grant. 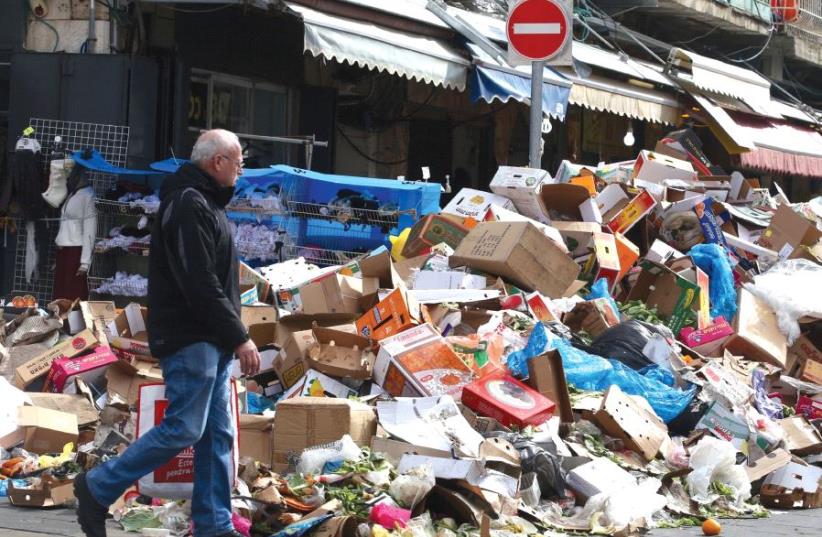 A MAN walks past a heap of garbage outside Jerusalem’s Mahaneh Yehuda Market during the three-day municipal strike that began on January 29.
(photo credit: MARC ISRAEL SELLEM)
Advertisement
Tuesday morning at 6 a.m. I awoke to a phone call from one of my political colleagues, in shock and disbelief because Jerusalem Mayor Nir Barkat had gone against a court order and was using an obscure legal loophole to put the city’s preschools on strike, essentially punishing tens of thousands of parents in the city.This was the moment my party, Yerushalmim, and I decided the mayor had gone too far and resigned from his coalition.For weeks Barkat and his team had been peddling to us, his coalition partners, the idea of a strike as the only means of advancing negotiations with the Finance Ministry for the 2017 capital city grant. Our gut was telling us that he was orchestrating this “only option” scenario a little too keenly and a little too quickly.A few days later we knew matters had intensified when Barkat brought in the notorious head of the Workers Union, Dany Bonfil, a convicted felon former mayor Ehud Olmert of all people had worked tirelessly to get rid of as he had allegedly been known to terrorize city workers to get favors for his friends and hold the city hostage on many occasions with illegitimate strikes. Barkat had given him a new lease on life a few years back by actively weakening his competition, thus paving the way for him to breeze back into Safra Square. So Bonfil owed him one.In the meetings that were held in the build-up to this nonsensical strike Barkat sat next to Bonfil, looking somehow smaller than him, with body language that said that this man wasn’t a natural partner for him but perhaps useful for now. We witnessed council members mumbling words of despair and Bonfil shouting them down; he was now in charge. At that moment I remember thinking to myself that Barkat had sold his soul to the devil and even felt a little sorry for him and his blinded judgment.The ultra-Orthodox didn’t say much – they didn’t have to because they know all too well Barkat can’t and won’t mess with their kids. They never take part in strikes – their rabbis tell them it’s a Torah transgression to stop Torah studies – and every year they somehow find a way to get out of the painful and tedious task of securing the budgets they later enjoy.The rest, as they say, is a steaming pile of municipal history: garbage- filled streets and in some areas garbage deliberately spread by union members on train tracks to stop the trains. Even more painful, parents stuck at home having to cancel their work at the last minute or calling on grandparents to help, an overall disruption of their already harsh routine.And for what? As I write these lines Barkat has still achieved nothing. A call from the prime minister last Tuesday evening threw him a ladder to climb down from the tree he’d climbed up, and he put the strike on hold. On Sunday, minsters reacted angrily to his oversimplified pitch for extra funds and immature tactics to secure resources that he could have secured by presenting crystallized programs rather than slogans and threats. Barkat’s reaction was to blame the Parents Union, that was reluctantly dragged into the mess, and of course Bonfil. He used them as he used all of us.And where were the rest of the city council members? Barkat’s own party mainly disappeared or simply repeated his tired and empty mantras that nobody was buying, and the rest of the council, the people that in coalition meetings initially stood with us regarding keeping children and parents out of the struggle, went on a groveling tour to distance themselves from the stench of the strike.My party and I took a stand against using ordinary people as political pawns and of that I am extremely proud. What is sad is that we have learned to expect so little from our politicians that when some of them actually act out of principle we find it hard to take it at face value.Jerusalem now more than ever needs a strong, determined opposition and we are looking forward to working for the residents of the city and not for a mayor who has lost his way.