A younger generation joins the struggle 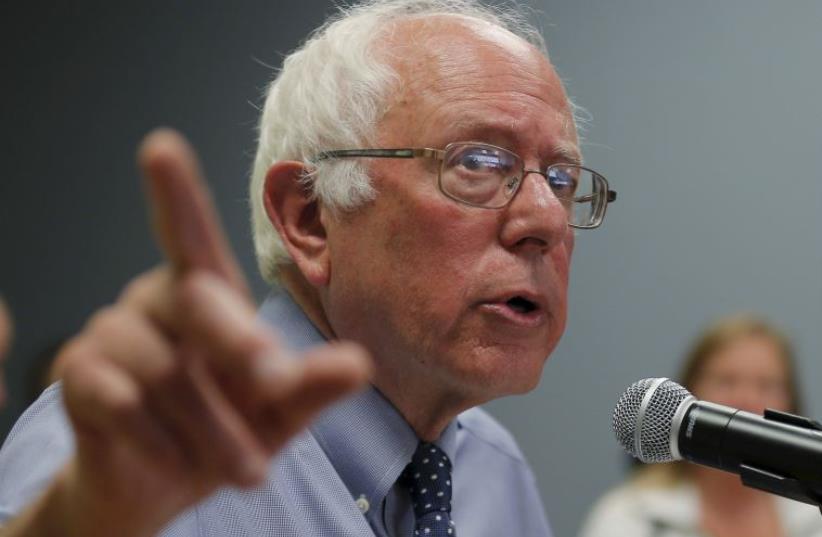 Democratic presidential candidate and US Senator Bernie Sanders (I-VT) speaks during a town-hall campaign stop at New England College in Concord, New Hampshire
(photo credit: REUTERS)
Advertisement
Left-wing activist Jewish grandparents are having a moment.Appointed to the Supreme Court in 1993, 82-year-old Supreme Court Justice Ruth Bader Ginsburg is no stranger to the public eye, and neither is 74-year-old Bernie Sanders, first elected to Congress in 1991.Seemingly out of the blue, though, raucous five-figure audiences pack rallies for Sanders’ presidential campaign and the soft-spoken, reserved Ginsburg is celebrated on everything from T-Shirts and coffee mugs to Internet memes and Halloween costumes. The #Notorious- RBG and #FeelTheBern hashtags continue to trend, reflecting public excitement and enthusiasm, especially among younger Americans, for these long-standing liberal warriors who have emerged as a totemic, generational icons.The rise of Sanders and Ginsburg parallels the growing conflict over women’s rabbinic ordination and communal religious authority most recently triggered by an RCA resolution that explicitly excluded both from its constituent community, most of American Modern Orthodoxy.Interestingly, the movement leaders implicitly targeted by the resolution for ordaining women and placing them as synagogue clergy are not young radicals, but long-established and respected personalities in the same age bracket as Ginsburg and Sanders. For example, Rabbi Avi Weiss, founding president of Yeshivat Chovevei Torah and Yeshivat Maharat, is 71, and Rabbi Shlomo Riskin, founding chancellor of Ohr Torah Stone and its Institute for Women’s Halachic Leadership, is 75. Like Ginsburg and Sanders, both had long-standing reputations as liberal activists, but neither was widely seen as truly revolutionary until fairly recently.In her New York Times bestseller Notorious RBG: The Life And Times of Ruth Bader Ginsburg, Irin Carmon notes that Ginsburg’s career is a master class in incrementalist struggle for women’s rights. In many ways, she explains, Ginsburg’s most radical act was simply “being herself – a woman who beat the odds to make her mark” in the upper echelons of a world that had no place for her.However, as the Supreme Court tilted toward a new conservative majority, she raised her profile, pointedly defending the social progress she spent her life and career carefully modeling and shepherding forward.Since 2007, she has made history with an unprecedented series of blistering dissents, often read from the bench for maximum public effect, protesting decisions limiting voting rights, abortion access and workplace discrimination laws, among others.The incredible resonance of #NotoriousRGB and Ginsburg’s ascendance as a liberal icon demonstrated that this time she was not fighting alone. Perhaps the greatest success of her generation was raising a younger generation to enjoy the benefits of her victories, and then a generation that takes them as givens.It is those grandchildren who are, today, most passionately resisting conservative efforts to roll them back, and who are most inspired by Ginsburg’s increasingly energetic resistance. Perhaps, for them, rallying around Ginsburg is their way of tapping into the history of a struggle they feel called to join.This dynamic also partially explains the popularity of Bernie Sanders among millennials. The generation of Sanders’ children reaped the immediate benefits of his activism for social and economic justice, but their children cannot imagine life without them. Faced with conservative pressure on protections they may otherwise have taken for granted, they have rallied around Sanders, whose strident campaign for president may represent a way for them to connect to the generations of struggle they now feel part of.In a similar way, rabbis Weiss and Riskin, among other pioneers in Orthodox women’s Torah education and communal leadership such as Rabbi Yitz and Dr. Blu Greenberg, Rabbanit Chana Henkin, Rabbanit Esti Rosenberg and so many others are reaping the generational benefits of their success. A generation of young women is growing up with the expectation of the same Torah education, and opportunity to use it, as their male peers. In addition, they have the added benefit of a generation of women who came before them to serve as role models.As the grandparents of their own movement respond to the latest conservative salvo against them, these young people may respond by rallying just as their peers are doing in the national political arena. They are not fighting for their own victories, but to preserve the achievements of those who preceded them from those who would take them away.The liberal advances of the past decades may yet be rolled back, as leaders such as Yeshiva University’s Rabbi Mordechai Willig have already called for “reconsidering” the value of including Talmud in women’s high school curricula. However, it will not happen without a war waged not only against Willig’s counterparts, but the entirely new generation they have come to represent.The author writes frequently on topics of Jewish thought, contemporary issues, and their intersection. A past assistant rabbi of the Hampton Synagogue and program director of Great Neck Synagogue, he lives with his family in Scranton, PA.