What became known as “The Damascus Affair” aroused protests all over the Western world. 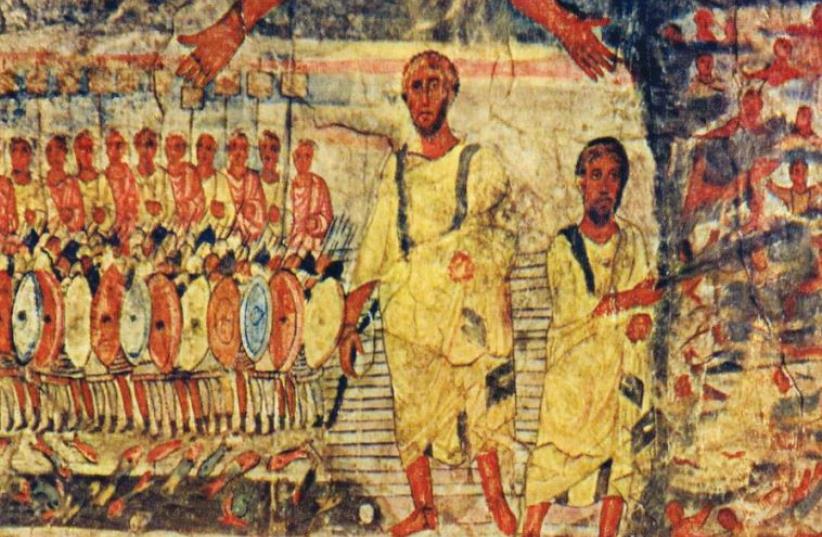 ‘Hand of God in Exodus and the Crossing of the Red Sea,’ wall painting from the Dura-Europas synagogue in Syria
(photo credit: Wikimedia Commons)
Advertisement
The Muslim authorities, under French colonial influence, leveled the charge of ritual murder against the leaders of the Damascus Jewish community in 1840. A Franciscan friar and his servant disappeared and Jews were implicated in their murder, being charged with “blood libel” for the first time in Islamic lands. What had been a common charge against Jews in Europe – that Jews used the blood of their Christian victims to bake matzah for Passover – led to the imprisonment and torture of the Jews of Damascus which led, in turn, to a false confession of ritual murder extracted under extreme duress. Tried by the French consul, the arrested Jews were sentenced to death. Seven leaders of the Jewish community were tortured in prison. Two died and one accepted Islam to save his life.What became known as “The Damascus Affair” aroused protests all over the Western world. Prominent European Jews Sir Moses Montefiore and Adolph Cremieux pleaded in Alexandria with Mehmet Ali, ruler of Syria, to have those arrested Jews still alive released from prison. They then traveled to Istanbul to persuade the Turkish Sultan to declare the charges false. The Sultan agreed and condemned the blood libel and the charges were dropped. Those Jews who had survived imprisonment were freed. In the end, a Muslim was arrested as the true killer of the friar and his servant.This was one of the first times Jews banded together across borders to aid their brothers outside of Europe who were in distress. Even American president Martin Van Buren, following the lead of the protesting Jewish notables, protested the arrest and torture of the Damascus Jews. Through his secretary of state, John Forsythe, Van Buren stated that “he cannot refrain from expressing surprise and pain that in this advanced age such barbarous measures be resorted to in order to compel the confession of imputed guilt.”However, there was one exception in European Jewry in protesting the Damascus Blood Libel.This exception was Abraham Geiger, the rabbi who led Reform Judaism in the Germanic states in the mid-nineteenth century, a great scholar in his own right. In a letter written at the time of this persecution, Geiger expressed sympathy for the Jewish community in Damascus but was more concerned that “Jews in Prussia may have the chance to become pharmacists or lawyers.” He continued that Jewish integration into German society “is much more important to me than the rescue of all Jews in Asia and Africa.” He sympathized with his brethren in the East solely as “a human being.”Geiger’s tepid stance highlights the malignant impact of Emancipation in Central Europe. If Prussia was the Fatherland that was granting civil equality to Jews and if the Jews’ primary loyalty was to the state that granted those rights, Judaism simply became a private matter of conscience and Jewish peoplehood and the concept of Jews as a nation was declared null and void. If German Jews were proclaiming “Berlin is our Jerusalem!” there was little sympathy left for those Jews who were deemed inferior and irrelevant to Europe’s Jews, embracing the Christian lands that emancipated them. As one French revolutionary stated when the National Assembly discussed Emancipation of Jews in 1789, “Everything to Jews as individuals, nothing to the Jews as a nation.”The bonds that united Jews all over the world through their faith, history and blood were erased under the terms of Emancipation. That Montefiore and Cremieux stood up for Jews abroad despite their allegiance to Britain and France respectively was confirmation that they were still staunch supporters of the notion of Jewish peoplehood. But Geiger was not.The New York Times, founded and published by American Jews of German descent, also trapped itself in an attitude toward Jewish suffering that runs parallel to Geiger’s indifference. In Professor Laurel Leff’s important 2005 study Buried by the Times, she describes how publisher Arthur Hays Sulzberger failed to highlight the news of the Nazi mass murder of the Jews and buried that news in the back pages of one the world’s most respected newspapers. Sulzberger buried the news of the genocide because he feared the Times would be identified as a “Jewish newspaper.” He was an American first and a Jew second. His loyalty to our great nation blinded him to the realities that Jews are a people and a tribe and will always remain so, despite the granting to Jews of civic equality anywhere in the world. Yes, Emancipation demands loyalty to the state in which Jews live.But that loyalty does not preclude embracing the notion that Jews are responsible to each other and share a 4,000-year history. Sulzberger’s assimilation into American society betrayed his brothers and sisters murdered in the Shoah.One thing I know for sure – there is now a Jewish state and a Jewish nation that will save Jews in peril. Although Israel’s Ashkenazi founders were often insensitive and discriminatory in their attitude toward Jews from Arab and Islamic lands, these Jewish immigrants at least had a safe haven after being persecuted in their countries of origin. But in reality, Israel is the country of origin for all Jews and the bonds forged between Jews from different lands in Israel is a rejection of Geiger and Sulzberger’s denial of Jewish peoplehood. The last Jews of Yemen have found their way to Israel through the action of the Israeli government. They will now be Jews in a Jewish state. Geiger’s embrace of the Fatherland proved to later be a disaster and the notion that Jews are not a people is patently false. We can no longer argue that the integration of Jews into Diaspora societies nullifies Jewish peoplehood. Maintaining a belief in being chosen and being part of a larger people should not produce charges of dual loyalty. Instead, they should strengthen bonds that have survived for thousands of years and strengthened who we are as a people.