Africa and the revitalization of the Zionist dream

Let’s show the world that we can do better than Europe in our treatment of African refugees, that Israel is far from being a racist nation, and that the Zionist dream is alive and well, thanks to our rediscovery of Africa. 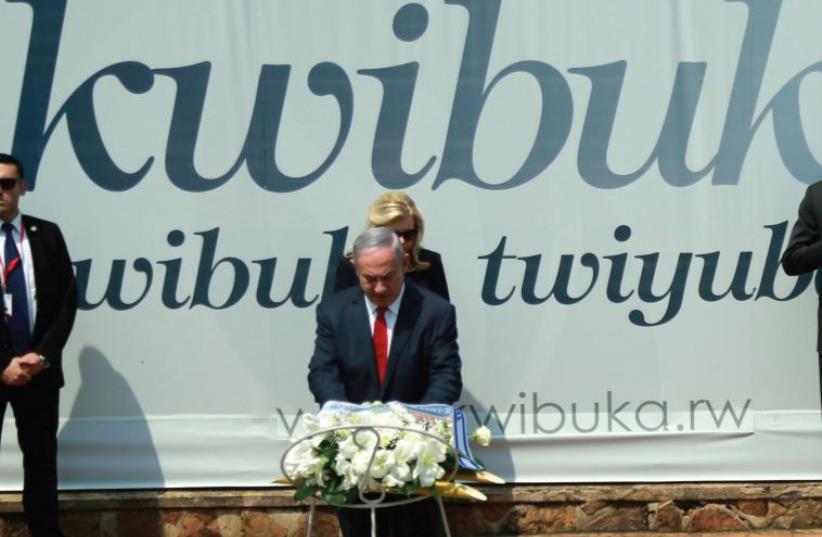 PRIME MINISTER Benjamin Netanyahu lays a wreath as Rwandan President Paul Kagame and First Lady Jeannette Kagame watch at the Genocide Museum near Kigali, Rwanda, earlier this month
(photo credit: REUTERS)
Advertisement
During his recent four-day whirlwind visit to four East African countries (Kenya, Uganda, Rwanda and Ethiopia) Prime Minister Benjamin Netanyahu proudly proclaimed that Israel was “coming back to Africa and that Africa was coming back to Israel.”After decades of neglect, could Israel’s return to Africa spark the revitalization of the old Zionist dream of Israel as a light unto the nations and demonstrate to the world that Israel is far from being the racist, apartheid state depicted by those trying to delegitimize our country? During the 1960s and early 1970s, tiny Israel won the hearts and trust of millions of Africans by sending kibbutzniks, doctors, educators and youth leaders to work side by side with African farmers, teachers, health officials and youth organizations to help build their newly independent countries.David Ben-Gurion’s and Golda Meir’s genuine sympathy for Africans and Africa echoed that of Theodor Herzl, the father of modern political Zionism. Herzl often expressed his desire to assist the redemption of Africa after he succeeded in redeeming the Jewish people.Africa’s break with Israel following the 1973 Yom Kippur war left many Israelis feeling betrayed, while Israel’s alliance with South Africa contributed to the souring of relations with many African countries.While serving as a catalyst for the resumption of diplomatic relations with many Africa nations, the 1993 Oslo accords did not rekindle the warm friendship of the past between Israel and Africa.By 2000, the large numbers of enthusiastic emissaries of Israel who had served in Africa on a Zionist mission in the 1960s were by now pensioners or close to retirement age. Conferences on Israel-Africa relations revolved more around nostalgic reminiscences of the good old days than visions and plans for the future.Neither government nor the general public showed much interest in Africa. Ignorance and negative stereotyping of Africa prevailed. The African continent was perceived as extremely poor and plagued by AIDS, corrupt leaders and tribal conflicts. The Israeli government and most of the public overlooked Africa’s great potential and the advantages of adopting more Africa-friendly policies. Now, in 2016, a return to Africa offers the opportunity to update and revitalize Zionism.An enlightened Africa policy at home and abroad could also undermine the claims that Israel is a racist and apartheid state put forward by those seeking to delegitimize Israel.Israel’s return to Africa upholds national political and economic interests. Like Ben-Gurion, Netanayhu has no qualms seeking African political support and votes in the UN. At the same time, he is promoting the export of Israeli products, technology and security expertise in potentially lucrative markets.Israel’s return to Africa can also support altruistic policies whereby a) growing numbers of Israeli youth volunteer to serve in Africa; b) development NGOs like Innovation Africa bring solar energy, drip irrigation and other low-cost technologies to improve services and raise the incomes of rural Africans, and humanitarian organizations like ISRAID help Africans deal with natural disasters; c) stellar research and training institutions like Arava Institute receive sufficient resources to expand their capacity to train Africans and make innovative technologies more accessible; and d) Tikkun Olam projects financed by Jewish philanthropy enable Israeli and Diaspora youth and development organizations to work together reinforcing the bonds between Israel and the Diaspora.But there is also much to do at home in dealing with Africa and Africans.First of all, Israelis could learn more about Africa and African culture and invite African professors, students, artists, journalists and government officials to come to Israel.Second, the government must radically change its policies toward and treatment of the 42,000 African asylum seekers in Israel, mostly Eritreans and Sudanese.It can implement the recommendations of Prof.Amnon Rubenstein, author of Israel’s Basic Law on Freedom and Human Dignity who called for a “hard” entry policy for non-Jewish immigrants and asylum seekers and a “soft,” humane policy for those already here. The government could declare victory in achieving its goal of stopping the flood of asylum seekers, thanks to the erection of the fence along our Sinai border.Third, let the government stop saying that Israel has no refugees, only illegal infiltrators or economic migrants, without processing their applications in a fair and timely manner; granting full refugee status to all those who fit the criteria and granting work permits, freedom of movement and access to public services to those asylum seekers waiting to have their applications processed.Fourth, African asylum seekers who have committed no crimes cannot be sent to Saharonim prison or Holot detention center. The government could invest most of the tens of millions of dollars now set aside for running the prison service and deporting asylum seekers to African countries where they have no legal rights and protection to improve conditions for Israeli citizens in South Tel Aviv, who have suffered most from the sudden and massive influx of asylum seekers dumped in their neighborhoods between 2007 and 2012.Finally, if we are to follow Torah ethics, human rights, common decency and our own self-interest, we would not label African asylum seekers in Israel as criminals, a demographic threat, or a danger to our national identity nor regard them as a burden on our society taking resources away from our own poor. Instead we should see them as respected guests who can contribute to our society and understanding of Africa.We can do more than offer protection. We can provide our guests with greater opportunities for education and training that will help them build their countries when they return. If we will do these things, they will return as friends and allies of Israel.Let’s show the world that we can do better than Europe in our treatment of African refugees, that Israel is far from being a racist nation, and that the Zionist dream is alive and well, thanks to our rediscovery of Africa.The writer is a Jerusalem-based author and consultant specializing in African democracy and development.