The translation of the phrase is often rendered as “God is Great,” but when you unpack the term you quickly realize that it is much more than a simple expression. 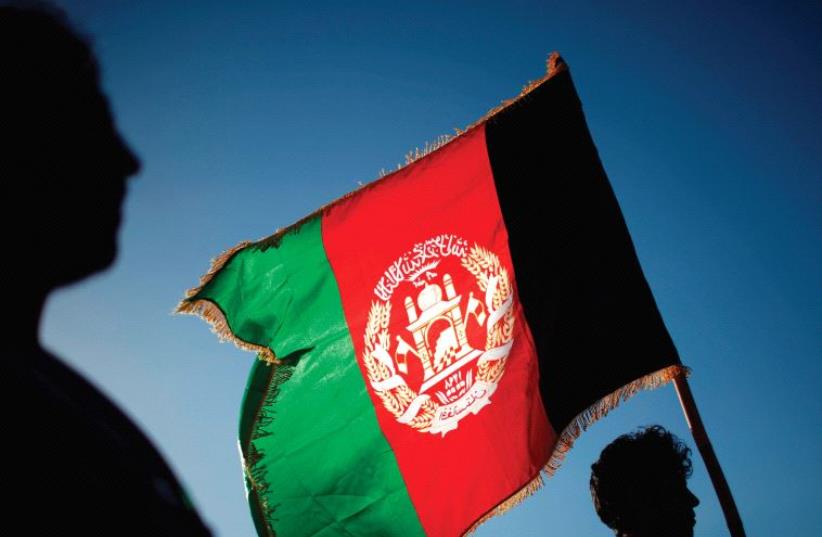 A MAN holds an Afghan flag, one of several that have the words ‘God is great’ on them
(photo credit: REUTERS)
Advertisement
Muslim terrorists shout it as they perform their acts of terrorism. “Allahu Akbar,” as they stab someone with a knife.“Allahu Akbar” as they ram car into crowds. “Allahu Akbar” as they blow themselves up together with everyone nearby. Ahmed Khan Rahami, the terrorist who assembled 11 bombs and planted four of them around New York City and New Jersey one balmy weekend in September kept a journal of thoughts and ramblings. One set of words was repeated over and over: Allahu Akbar.The translation of the phrase is often rendered as “God is Great,” but when you unpack the term you quickly realize that it is much more than a simple expression. After all, a simple expression would never do as the last words a Muslim speaks while maiming and murdering innocents.Allahu Akbar does not actually mean “God is Great,” and contrary to common belief, it is not a phrase from the Koran. In fact, it is not found anywhere at all in the holy book of Islam, but rather in the Hadith.The Arabic expression is called the takbir. The words “akbar” and “takbir” use the same three-letter root, k-b-r, which means “big” or “great.” Allahu Akbar is, in fact, part of the muezzin’s call to prayer. It is a phrase used in times of happiness and joy, used when a baby is being born, during the pilgrimage to Mecca called the hajj and during festivals called the Eid. And yes, also in wartime and in jihad.The takbir is also found on the flags of Iraq, Iran and Afghanistan.The expression sends shivers down our spines. We understand how it was intended when Egyptian Olympic judoka Islam El Shenaby uttered the words just before his match with Israeli Olympic judoka Ori Sasson. He was not celebrating the birth of a child.It was a declaration of jihad, of war, it was a war cry used to destroy the non-believer.(In the end, it was the Israeli who emerged victorious.) After September 11, 2001, the FBI said that they found notes with the takbir among the possessions of the terrorist in Dulles, the crash site in Pennsylvania and in Mohamed Atta’s suitcase.In the suitcase they even found a note that read, “When the confrontation begins, strike like champions who do not want to go back to this world. Shout ‘Allahu Akbar,’ because this strikes fear in the hearts of the non-believers.”The flight recorder of Flight #93 has the terrorists repeatedly shouting “Allahu Akbar.” The terrorists who perpetrated the Charlie Hebdo attack and the attack in the Bataclan Theatre in Paris shouted the takbir.Terrorist all over Israel have used the takbir as their battle cry.The Hadith, which is a set of additional Muslim texts written after the Koran, describe how the prophet Mohamed prepared to attack the Jews in Khaibar in 628 CE. As he begins the battle, he shouts “Allahu Akbar.”The exact quote from the Hadith is: “The Prophet set out for Khaibar and reached it at night. He used not to attack if he reached the people at night, till the day broke. So, when the day dawned, the Jews came out with their bags and spades. When they saw the Prophet; they said, ‘Muhammad and his army!’ The Prophet said, ‘Allahu Akbar! (Allah is Greater) and Khaibar is ruined, for whenever we approach a nation [i.e. enemy to fight] then it will be a miserable morning for those who have been warned.’” “Allahu” is the nominative form of the word “Allah,” the name of God in Islam. It is not God. There is a significant difference between the name of God and the word “god.”Akbar is a elative form of the root k-b-r. Kbr means big or great.In English we have the common, relative and superior forms of words. For example – big (positive), bigger (comparative) and biggest (superlative). In Arabic the elative is a combination of our comparative and superlative forms. That is the reasons “akbar” is sometimes translated as “greater” and sometimes as “greatest.”“Allah is magnificent” is also not a translation. The elative form uses an “er” or “est” at the end of a word, meaning Allahu Akbar must be translated to mean that Allah is greater than or superior to any other god.That is significant.So when someone tells you that the takbir and jihad are about introspection and self-improvement, don’t believe them. People who shout “Allahu Akbar” do not have peaceful intentions. Allahu Akhbar, when used by a Muslim in the presence of non-Muslims, is a call to war. Always was, always will be.The author is a political commentator.
He hosts the TV show Thinking Out Loud. Follow him on Twitter @Micah- Halpern.