AMIA victims cry out for justice

Immediately after the bombing, I traveled to Argentina and met with Menem privately. I became convinced that he was participating in a cover-up. 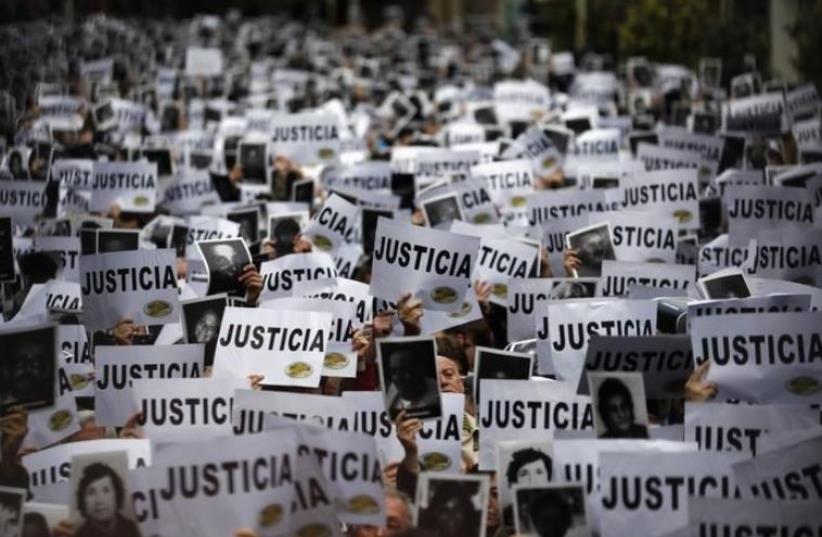 DATE IMPORTED: July 18, 2013 Thousands of people hold up signs reading, "Justice" as they gather to commemorate the 19th anniversary of the 1994 bombing of the Argentine Israeli Mutual Association (AMIA) Jewish community center in Buenos Aires July 18, 2013.
(photo credit: REUTERS/MARCOS BRINDICCI)
Advertisement
Last Sunday on the Hebrew calendar marked the 24th anniversary of the bombing of the AMIA Jewish Community Center in Buenos Aires, Argentina. It was the largest attack against the Jewish community in the Diaspora since the Holocaust, with 85 people murdered and hundreds injured. To date, none of the terrorists have been apprehended.
In recent years, much has been written, as it should, about the killing of Alberto Nisman in January 2015. Nisman had been serving as special prosecutor of the AMIA bombing for about 10 years. On the night before he planned to announce that then-Argentinian President Cristina Kirchner was covering up Iranian involvement in the attack, he was murdered.
Forgotten in the voluminous writings on AMIA was the cover-up of Carlos Menem, the president of Argentina when the 1994 attack took place. Experts note that it is critical for law enforcement to act quickly to arrest terrorists. The further from the time of attack, the colder the trail becomes.
Immediately after the bombing, I traveled to Argentina and met with Menem privately. I became convinced that he was participating in a cover-up – that an investigation would have implicated the highest government officials in Argentina, including Menem himself. He responded to these allegations by calling me “delirious,” “loco.” Jose Galeano, the first special prosecutor of the case, in effect, arrested me, hauling me into his office where he held me for six hours. All this, I believe, was meant as a warning that I’d be well advised to stop accusing Menem of covering up.
Both men have since been disgraced. Menem spent time in exile in Chile and was put on trial for derailing the AMIA inquiry. Galeano, too, was accused of bribery during the investigation and removed from his position as special prosecutor.
The Jewish leadership in the United States was regrettably hesitant to criticize Menem. Just two months after the AMIA attack, Menem was honored by the Appeal of Conscience Foundation for standing “shoulder to shoulder” with the Jewish community after the bombing of AMIA. The participants at this gala read like a who’s who of American Jewry. Leaders of the major Jewish defense agencies were all there. “He made some impassioned statements,” said one of them. “He said his government is committed to protecting Jewish institutions.”
When my colleague Rabbi David Kalb and I walked into the event to confront Menem, we were asked to leave. Refusing to do so, we called out, “In the name of the victims and their families, you cannot honor this man.” People shouted at us, “You’re wrong, absolutely wrong! You are dishonoring the Jewish people!” In the end, Kalb and I were dragged down three flights of stairs and arrested as the crowd looked on.
As we commemorate the bombing, I see images of people I met during those days.
Rosa Barreiro: I had visited Rosa in an intensive care unit just a few days after the attack. She seemed well. I wondered why she had been hospitalized. The doctor explained. Rosa was walking in front of the AMIA building with her five-year-old son, Sebastian. A fragment from the blast penetrated the boy’s skull and he died instantly – the youngest victim of AMIA. Rosa was in the intensive care unit, unable to speak.
Rabbi Angel Kreiman: Kreiman’s wife, Susy, was at her desk at the AMIA, helping people find employment. When I left Buenos Aires a week after the attack, her daughters were still in the makeshift headquarters waiting for news. Upon arriving home, I called Angel. “How are things going?” I asked. “We’re sitting shiva. Susy was found.”
Damian Goldenberg: I was with Damian as he and his family awaited news about his sister, Cyntia Veronica. It came, and Damian, sweet and gentle, cried out, “Where is God?” All we could do was hug as tears flowed uncontrollably.
I’m thinking too of the rabbis who joined me in offering comfort to the bereaved. Conservative Rabbi Abraham Skorka, who was there when Damian was notified – a dear friend and colleague from whom I, an Orthodox rabbi, learned so much. Chabad Rabbi Avraham Benchimol, who never left my side as we consoled and tried to give hope. I will never forget those terrible moments when our lives intersected, when we were united in purpose.
We remember, too, the words of the archbishop of Argentina, a close friend of Rabbi Skorka, who spoke out with deep compassion and love, bringing succor to the Jewish community. Today, that archbishop is Pope Francis.
After the biblical Cain murdered Abel, God declares, “The voice of your brother’s bloods cry out to me from the ground.” One wonders why “blood” is in the plural.
In the case of the 85 who lost their lives at AMIA, the answer is clear. Not only were they murdered that day, but the ongoing cover-up is nothing less than their being murdered again.
The Hebrew anniversary of the AMIA attack fell this year on the fast of Tisha Be’av, the saddest day of the Hebrew calendar, the day we commemorate the destruction of the Temples. At the AMIA bombing, 85 human temples were destroyed. Their bloods cry out from the ground, demanding justice.
The writer is the founding rabbi of the Hebrew Institute of Riverdale-The Bayit and longtime activist for human rights.